Jonathan Manning tests his stomach for heights – again – by climbing the O2 Arena to enjoy breathtaking views across London. 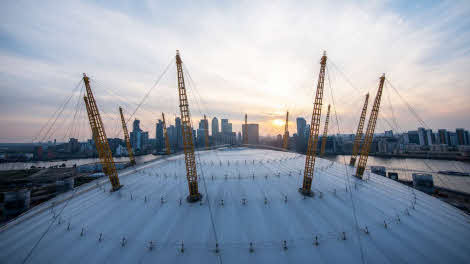 Amid the endless controversy that surrounded the Millennium Dome as we approached the end of 1999, one of the project’s saving graces was never discussed – the view from the top. The great white dome was prematurely condemned by some to being a great white elephant, despite the Government’s promise that it would be home to “the biggest, most thrilling, most entertaining, most thought-provoking experience anywhere on the planet in the year 2000”.

Two decades on the structure has become the most successful music venue in the world, hosting more concerts and attendees than anywhere else. Yet perhaps its star attraction twinkled above the on-stage stars for years before anyone realised. ‘Up at the O2’ opened in 2012, a thrilling walkway to the summit of the dome, and a viewing platform with a spellbinding panorama of London.

High above the vast, taut-roofed tent is also the best place to admire details that would impress the architects of Inca pyramids. The structure has 24 scallops (one for each hour of the day) and 12 steel masts (one for each month of the year), is 52m tall (one metre for every week of the year), and boasts a diameter of 365… well, you get the picture.

The climb to the top, however, is challenging. Not a Snowdon or Ben Nevis scale of challenge, but dealing with the 30% gradient and huge exposure does take both effort and nerve. Fortunately, everything is in place to make the roof walk as easy and accessible as possible, and everyone is provided with special grippy boots, a tight-fitting, if-unflattering harness and a strong metal cable and latch that anchors every climber to the rail up and over the dome. This is no free-for-all – group numbers are limited and the experience is led by an expert.

Nor is this a trampoline, as our guide, George, reminds us. The white membrane of the dome is only 1mm thick (the air inside the dome weighs more than the roof!), so no bouncing. We walk on a springy blue walkway, as steep as a ladder in places, but punctuated by flatter platforms.

Progress is slow and steady, a chain gang slowly shuffling skywards for perhaps 10 minutes before we reach the wide viewing platform, from which an entire section of the Thames opens out. The obvious money shot is the skyline of Canary Wharf with its skyscrapers, including the iconic One Canada Square, topped by its pyramidal roof (it‘s the third tallest building in the UK). But then the panels of a 360˚ toposcope identify other landmarks to spot. 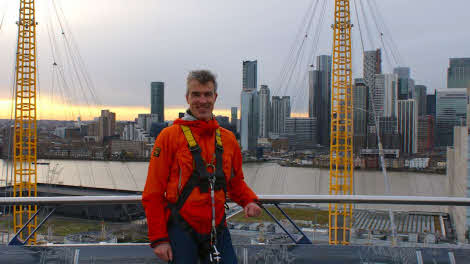 To the south-west is the palatial structure of the old Naval College at Greenwich. To the east I can just about make out City Airport, where aircraft seem to take off and land at perilous angles. On the far bank of the river sits Trinity Buoy, London’s only lighthouse, and Container City, a collection of brightly painted shipping containers.

Further north is the distinctive silhouette of the ArcelorMittal Orbit sculpture at the Queen Elizabeth Olympic Park, while below me the tiny, egg-like cable cars of the Emirates Air Line nudge along their high-wire crossing of the Thames. Despite my best efforts, I can’t quite make out Abbey Wood Club site, barely five miles away as the crow flies.

My camera is put to work, while other members of the group pose for selfies or raise a toast. Up at the O2 is clearly a popular location to mark birthdays and anniversaries (I’m guessing proposals, too), and there’s the option to pre-book a glass of chilled bubbly at the summit.

A woman from Brixton tells me that she and her friend had decided on the Up at the O2 adventure to make sure they created a positive memory in Covid-struck 2020. It certainly feels like an experience to share, especially when the low winter sun breaks out below a bank of heavy cloud, casting a golden spotlight onto the mirrored windows of Canary Wharf.

Chilled by a biting wind, I’m ready to start the descent, although the walkway down looks more like a runway or giant waterpark slide. In many respects it’s physically harder going down than it was climbing up, with some walkers choosing to go down backwards, or jettisoning their dignity to wiggle down on backsides.

When debate raged in the last years of the 20th Century about what would actually go inside the famous dome, one suggestion was for a ‘big Millennium ride’. The ride never materialised, yet a bigger thrill was there all along. And now, as the dome celebrates its 21st birthday, the view from its peak just gets better and better.

Three more views with a thrill... 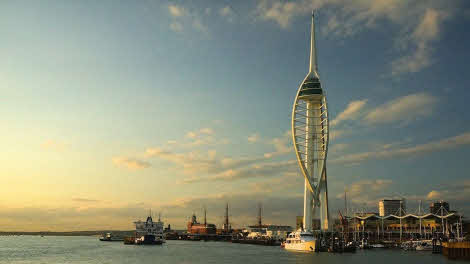 Spinnaker Tower, Portsmouth
Whizz skywards in a high-speed lift to the View Deck (or The Clouds café, one floor above) to an eyrie with views that stretch as far as 23 miles. The glass floor Sky Walk will test your nerves, while the truly
brave can abseil down. Adult tickets £11.95 (online)
Info: spinnakertower.co.uk
Stay: Rookesbury Park Club site 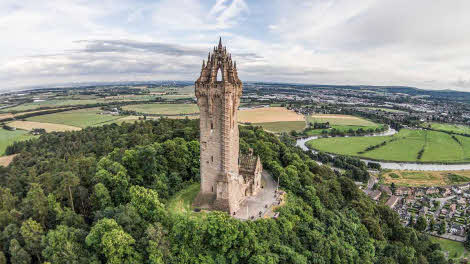 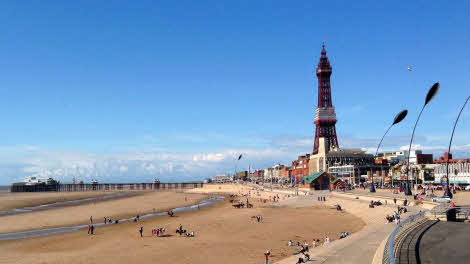 Blackpool Tower, Blackpool
Gaze down on ant-sized holidaymakers on Blackpool’s Promenade, or look out across the north-west of England to the Lake District. You can even see the Isle of Man on a clear day from the 380ft-high
vantage point. Adult ticket
£13.95 (online).
Info: theblackpooltower.com
Stay: Blackpool South Club site