We (my wife and I) had been looking forward to this holiday for so long. We approached the site along a narrow single track drive up to a small reception area opposite the toilet block and were greeted by we now now as a helpful English lady and we now know as the Château and site owner, we were told where our pitch was. We paid for a “super pitch with electricity “ perhaps we were expecting too much as the pitch size was about the same size as our uk club sites ie car caravan and awning side by side.the pitch was a dry mud bowl with no grass due to the extreme heat and no evidence of watering anywhere, in fact our “ tap “ was a row of about 6 taps mounted in a row about 10” from the floor ! No doubt fitted by the seven dwarfs. One of the taps was being used by our next door neighbour as his was blocked up and covered by cherry stones etc. The site is nice enough in one respect rows of short tree lined avenues to help shield you from the blistering heat ( even at the end of the season in September.) The toilets were two rows of cubicles gents opposite the ladies with the wash basins around the corner opposite the showers ? The showers whilst hot and on demand for as long as you want were sadly dated as the whole site seemed to be with no apparent regular maintenance yet the owner seems to float around in case you needed him ? It reminded me of the scenario of Carry on Camping as if I was stuck in a time warp ? The final crunch came with the internet !! 3 euros for 1 hour ? Or 6 euros for 24 hours ??? But due to them not having any more 24 hr cards left we were forced to buy a couple of those or go without! Would we go back ? Never ! It’s probably ok as a one night stopover because there did seem a lot of ins and outs. I suppose as a short term base it is ok but get your act together Castles , it has a nice pool area for children but that is about it or an old children’s area that probably constructed in the 60’s. I don’t like to moan but if anybody has ever stopped at the club site in Ludlow wow ! That is 5 star luxury , I can’t wait to go back ! Just do you research and find another site , but not in this group if this is anything to go by Ps as I was typing this the helpful British lady that “ runs “ the site gave me a code to put in for the wi fi thank you Tracy There was a guy that checked out today that was a travel writer whose article will be published in January, I wish I could read that ?

Reply from the Site:

The SP site with the Club is a special pitch which means it has drainage and water and the pitches are all 150-200 m2 on the site. We had a drought last summer and there was a water ban so we do apologise for the dusty pitches but it was out of our hands. The wifi problem was due to our supplier and we did issue free codes, and the maintenance problems are sorted when we are made aware of them.
We are not a modern site and the toilet/shower block is in a classified building that we are not allowed to destroy or build a new one.

Stayed here for the fourth time for one night only in our motorhome. Great to be able to choose the pitch. A very friendly welcome from the lady on reception as usual. The site is very clean, well kept gardens and, lovely pool area. Showers are adequate to use. The only fly in the ointment is the restaurant. The last two years the food has been so disappointing and not worth the costs charged. We will definitely cater for ourselves in the future. The wine is also overpriced in the restaurant. What a shame as the previous people that ran the restaurant could be highly recommended.

This is a nice site however the facilities are clean but very dated. The restaurant serves good food but expensive. Pitches are fine although they do slope but not a problem. Staff speak perfect English and are very helpful. I would stay again.

We were there from the 1st July for 3 nights so just before the busy time. It was very quiet. We had a serviced pitch but that did mean that everyone came onto our pitch to get their water!! The pool area was nice and although the shop was very basic, mostly wine, the people running the site were helpful and friendly. Given we have only very little French they persevered with us. The site was well placed for Limoge, which was a nice day trip and we really enjoyed the porcelain museum. The only issue with the site was the restaurant, the prices were quite high for what was very basic food. The presentation was very 1970’s with lots of iceberg lettuce as the garnish with everything. Disappointing restaurant but on the plus side the bread order in the mornings was terrific, best pain au raisin I have ever had. Overall a lovely site, charming people and very easy to find from the motorway so a great stop off on our trip south.

We arrived on the 12 May having decided to treat ourselves by bookings a fully serviced pitch at the cost of £28 per night and we’re looking forward to being able to eat at the on site restaurant which had received very good reviews previously. The welcome we received from the English lady on reception could not have been nicer, she explained there were 3 fully serviced pitches and told us which numbers they were or we could park anywhere. Asked about what time the restaurant opened she advised that the restaurant was closed as the couple who ran it had retired and they had not be able to find another chef. She did say she could recommend restaurants outside of the site. Two of the pitches were on very big slopes the third totally in the dark due to the trees around it. We chose what we thought was the best but because of the way we had to park to be level, the water would not drain away. The showers and toilets were not clean and had mud on the floor. They were not cleaned at all the two nights we were there.The showers were hardly warm and the water in the dish washing area was the same. We were so disappointed that we left after two nights even though we had paid for three. This site may be ok in the summer when you want shade but not in Spring. It is not suitable for motorhomes in my opinion.

Stayed twice. Enjoyed Peace and quiet, good size pitches. Beautiful chateau and deer on site. But most of all restaurant superb. Thank you for making our wedding anniversary extra special Michelle, Christian and team. They even cooked best beef bourguignon I have ever eaten just for us. Superb evening. Once again wonderful stay see you next year.

One night stop over on the way south.Easy to find just off the autoroute.Facilities limited and toilets require updating-defo NOT a castels 5-star site! Arrived after a downpour and grass pitches waterlogged. 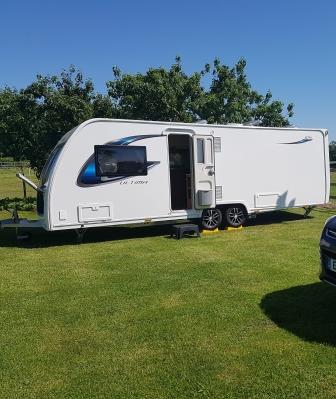 Situated on a parkland site in the grounds of a stunning chateau (no access), this site certainly looks the part. There is a bar and restaurant but this looked a bit rundown and not too welcoming, and the lovely pool was accessed through this bar area. Friendly owners one of whom was English seemed very helpful and we ordered bread for the morning. Good electric hookup and plenty of clean and spacious shower/toilet block facilities. A nicer, more family friendly bar/restaurant would be our only suggestion

Only stayed one night but enjoyed walks passed the chateau down to lakes with dogs. Can pitch were you like at this time of year. Part of the castle group very nice. Friendly helpful staff morning patisseries yum.

We stayed here June 2016, all in all a lovely peaceful site, set in the grounds of a chateau. Restaurant was excellent, all of the staff were polite and helpful. No shop but essentials were sold in the bar. The entrance is tight and needs care, the pitch was of a good size. We would certainly return. A trip to Oradour sur Glane is a must...very sobering.