Four Campsites and a CL In the middle of June we set off on a three week tour. Up’t north as far we were concerned. It was also going to be the longest trip away so far in our new motorhome since taking delivery in March of this year. 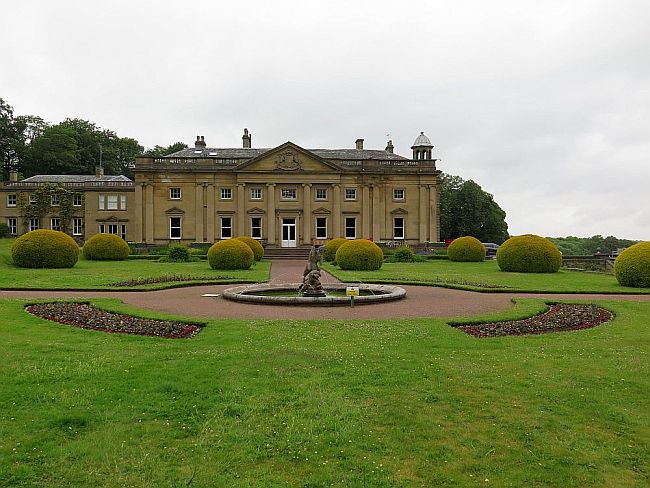 Our first stop was the CL at Wortley Hall. Five hardstanding pitches with electrics. Water and waste nearby and a rather good toilet/shower block a little further away. CL’s seem to have come on a bit since we used them many years ago. Wortley Hall, which is not far from Sheffield, has an interesting recent history. In the fifties it was purchased by the Co-Operative movement to provide training and holiday opportunities for Union members, a role that continues to this day. You just need to be a CMC member to use the CL!!! There are plenty of walking opportunities around the Hall and Gardens should you wish to make use of them. There is a restaurant at the hall but this does not open every day but you can do as we did and have a lunch in the Fire Brigades Union Bar and very nice it was to. It’s not too far to walk into Wortley Village where there is a pub and shops. Unfortunately the bus service along the main road is fairly infrequent.

After three days at Wortley we moved on to near Scarborough and the fairly recently acquired site called Cayton Village. In its current form a bit different from mainstream Club sites but it is rumoured that it will close at the end of the year for refurbishment which I expect will be quite comprehensive. It is an ideal location, especially for us motorhomers as there is a half hourly bus service from directly outside the campsite. It was the bus that we used to explore, initially to Scarborough which has a beautifully wide sandy beach with the town as a backdrop. We arrived at the bus station and wandered down towards the sea. We cheated by taking the Cliff Railway down to beach level. We walked all the way round to the harbour which still seems use by the fishing industry. Scarborough still feels quite Grand and has perhaps suffered less than many other seaside resorts around the country. 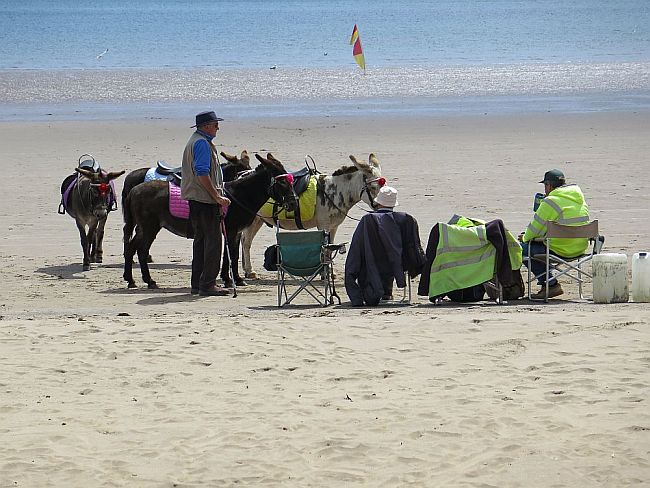 Another excursion from Cayton Village was to Filey, a place I had not been to before. I have to say I was quite impressed. Charlotte Bronte moved from Scarborough to Filey when her sister Anne died. The house where she lodged is now a café where we decided to have a coffee before exploring further. Along the cliff top are some lovely gardens sponsored by local organisations and bordered on one side by the Royal Crescent a development built in Victorian times to persuade those that enjoyed a quieter life to leave Scarborough to live in Filey. At the end of the cliff gardens are the steps down to the seafront. Before descending we took in the view of the wide sandy bay that forms the seaside resort. Probably not as busy now since the demise of the once famous Butlin’s Holiday Camp! 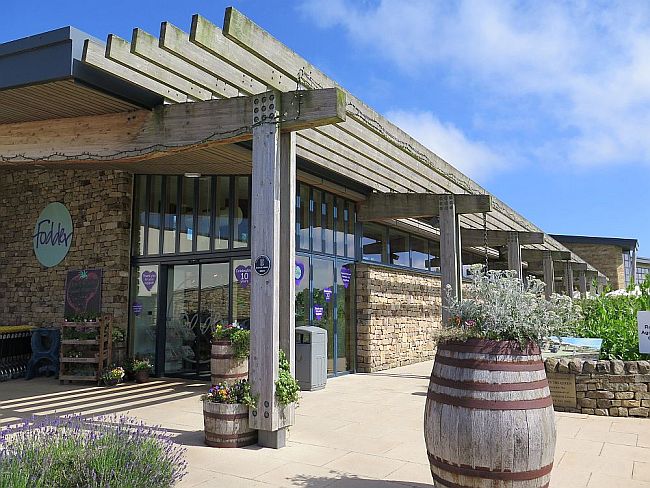 Our five days at Cayton Village and time to move onto Harrogate. We decided to use the campsite at the Great Yorkshire Showground called Harrogate Caravan Park. T&C’s a bit different to booking a Club site, £50 deposit and the balance seven days before arrival. We don’t know we are born in the CMC!!! I think in a previous life this campsite was run by the Club but the showground obviously decided to take it back and modernise it. There were several reasons for being here. Firstly we were meeting up with friends that we first met when we all moved to Milton Keynes, from all over the country, forty years ago. As careers developed many moved away as was the case with Christine and Martin. We have been in touch over the years so we arrange to meet, they live not so far away from Harrogate. It was good to catch up and we had a nice lunch at Fodder’s Farm Shop next door to the site. 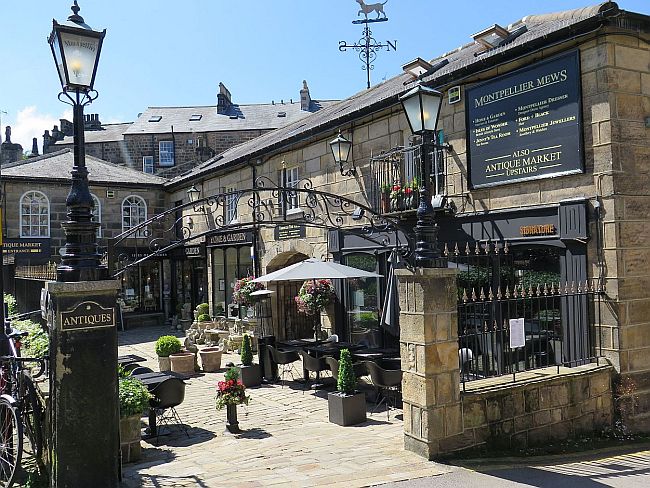 The next day we took the bus into Harrogate. We stared to explore and it wasn’t long before we found Betty’s tea shop, which incidentally celebrates its 100th anniversary this year. When we arrived there was a queue so we decided to have wander around the Montpellier district of Harrogate which Betty’s is part of. When we got back the queue had gone so we made our way inside and waited to be seated. We couldn’t come this far and not sample the delights of this famous tea shop. We were not disappointed, wonderful attentive service. Harrogate is a lovely place and well worth the visit even if you don’t take tea! It is also an excellent hub for onward buses and the next day we went out to Knaresborough. Not so much in the way of a town centre but of course renowned for the iconic railway crossing of the river which is feature on everything from boxes of chocolates to jigsaw puzzles!

Having left Harrogate we crossed the Pennies to Bury. En route passing Stott Hall Farm which sits in the middle of the M62. It was long thought that it was bloody mindedness by the owner that caused the motorway to pass either side  of the farm but a recently discovered documentary on the building of the M62 reveals that the reason was a geological fault. We have been to Burrs before but clearly approached from a different direction so had the delight of wending our way through the suburbs of the town. On the final approach to the site  I am always concerned for my fillings on the cobbled road. We arrived on the Saturday as they were preparing for the Bury Agricultural Show, which was a one day event on the Sunday. We didn’t visit ourselves but it did seem well attended by the locals which was good to see. Other changes at Burrs was building of a railway halt for the East Lancs Railway. One thought we had whilst at Burrs was to take the bus into Bury and then take the tram to Manchester. Unfortunately it was a pretty wet day some so we decided against that idea and just did some shopping in the town. 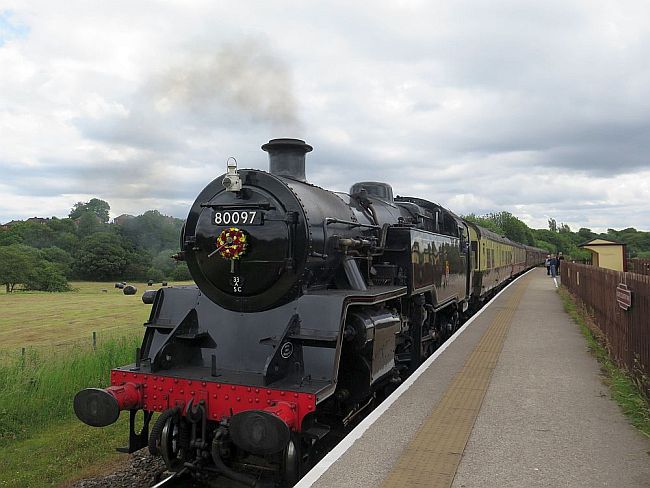 Eighteen days into our trip and we are on the move again, this time to our final stop at Buxton. We have never stayed at the CMC site that used to be called Low Grin. It is quite impressive as you descend the road down to the Grin Low Country Park car park as you can see the massive cliffs of rock that forms one side of the site which used to be a quarry. We were told it was an easy walk into Buxton, although it could be more of a struggle on the way back! Foolishly I thought getting as far as Poole’s Cavern would be about the halfway stage but we soon realised that it was a bit further to get to the centre. Buxton is a nice Spa Town but currently there is a major restoration project going on in the Centre. When it was time to return to the site we made use of the fixed price taxi fare back to the site. The taxi driver mentioned that he takes far more people back to the site than the other way round. The next day we wanted to visit Solomon’s Temple which is a folly overlooking the wonderful countryside. It wasn’t too far but was all uphill! We were blessed with a lovely day so had far ranging view over towards Buxton with the Opera house being clearly visible. 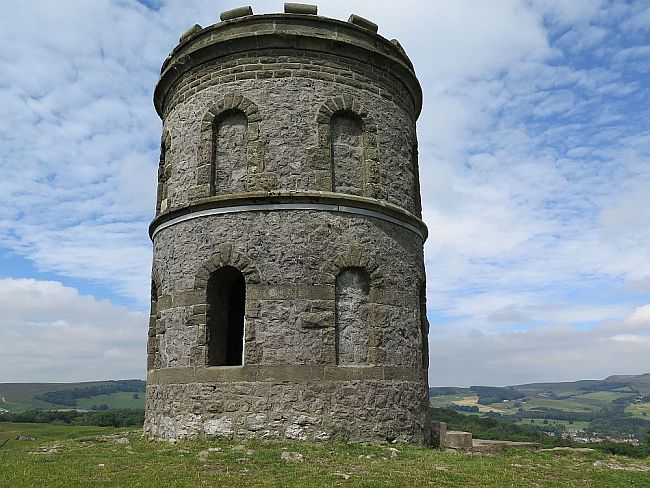 As I mentioned earlier this was the longest trip we have done in our new motorhome but pleased to say everything seems to be working OK and we are getting used to the single bunk layout. Being nearly a metre shorter than our previous one it’s easier to get on and off pitches and to get round the tighter roads. It also seems to be showing better economy as not only is it a much lighter van but also has a more powerful engine. 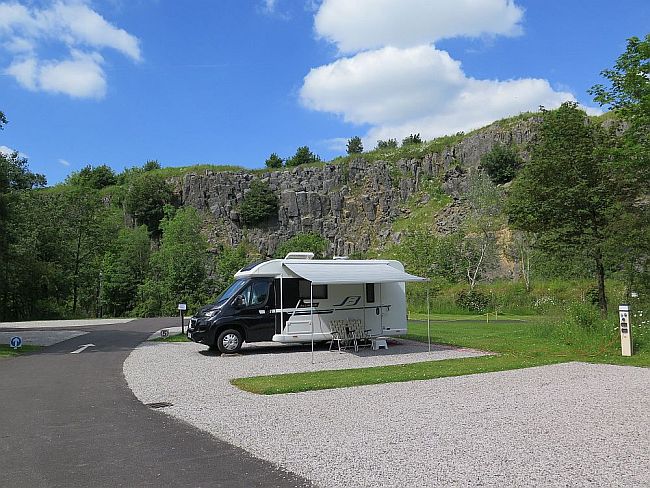 Another informative and well-illustrated 'story'. We're off to Buxton next week (Clover Fields at Harpur Hill) and so note, with a little dismay, that the town centre is being renovated!

It's the Crescent being restored which I am sure will be wonderful when its finished so not the whole town. I had a look at the site you are staying at. A bit further out but at least an hourly bus service where as the taxi is really the only option from  Grin Low unless you walk. Interesting to read your thoughts on Wortley Hall, David - we stayed there back in May, just as the bluebells were at their peak and the rhododendrons starting to flower. A really good CL which we hope to revisit next year.

Enjoyable read as usual David, I didn't know about Wortley Hall and the co-op. Interesting story and photos, thanks!

Good read and photos,  I enjoyed my armchair visit.

Just back from Cloverfields. Excellent family-run site; 15 min bus ride to centre of Buxton from the gate.Adults-only alternative to Club site at Grin Low.

Great read. Living 'up North' we've visited many times all of the places you visited. Glad you enjoyed your visit. Don't wait too long before you return David.