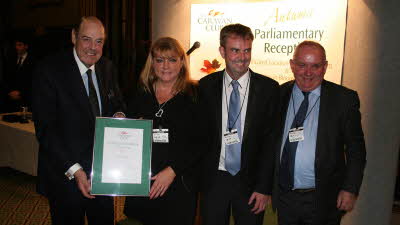 The farm itself has been in the family since 1960, with Dean living there his entire life before they opened as a CL in August 2015. Set in the beautiful Pembrokeshire countryside, the site is perfectly located for walking, cycling, and nature and wildlife inspired getaways.

Just a 20 minute walk from the beach and access to the Pembrokeshire Coast Path, visitors can explore the 186 miles of magnificent scenery as well as spotting native plants, animals and birds.

Certificated Locations are privately-owned, maximum five-van sites found across the UK, many in idyllic and remote locations on farms, country estates and beside inns, which can provide a valuable, additional income stream for local communities. These awards are presented at the House of Commons in recognition of the Caravan Sites and Control of Development Act (1960) which enables The Caravan Club to grant certificates to landowners to operate CLs.

“It is a huge surprise to us both to have won this award and we are absolutely thrilled. Having opened as a CL in August last year we have been extremely busy every day since. We’ve put a lot of focus on ensuring that our site meets the needs of modern day holidaymakers including digital TV and satellite hook-ups, and site-wide superfast wifi. Most importantly however, the feedback that we receive from our guests is that we are always on hand to help out with any queries as well as popping down to join them for a glass of wine in the evening sun!”

“Access to The Caravan Club’s CL network is a huge benefit of membership and each and every CL offers something completely different. This year’s winners’ commitment to offering the best possible experience for Club members, combined with their beautiful settings are the reasons why these sites have been awarded these prestigious accolades.”

Caravan and Motorhome Club membership is just £54 per year and provides members with access to 2700 quality sites in the UK and overseas.