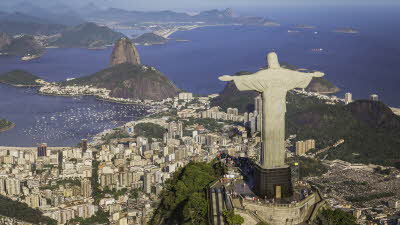 With Olympic fever having gripped the nation over the last few weeks, CheapOair reports that flight sales to Brazil are up 73 per cent this year compared to 2015.

There’s no doubt that the Rio 2016 Summer Olympics is responsible for the rocketing appetite for Brazil’s rich culture and spectacular natural wonders, with nearly half (48 per cent) of this year’s holidaymakers heading to that particular city in July and August, compared to just 17 per cent during the same period last year. With the Paralympics due to begin in Rio on 7 September, this means flight bookings to Brazil with CheapOair from July to September are up 98 per cent year on year.

Whilst the 19-day sporting event has put a spotlight on Rio de Janeiro, it seems that cosmopolitan Sao Paulo – one of the host cities for the Games’ football tournament – is also benefitting from the halo effect. Bookings to South America’s largest city have already more than doubled versus last year (221 per cent year on year).

“Whilst the 2014 World Cup put Brazil on the map for many travellers, the first Olympic Games to be held in South America has really helped cement the country’s position as one of the world’s must-see holiday destinations.

“With Rio’s airport nearly doubling its capacity in the run up to the games and fantastic new transport facilities and hotels in place across the city, it’s clear why this summer of sports is already inspiring holidaymakers to discover the country. And, with so much to offer beyond its famous beaches and exotic carnivals, we look forward to helping even more Brits venture deeper into Brazil to see what this captivating destination has to offer over the years to come.”

Return flights from London to destinations across Brazil with TAP Portugal cost from just £499 per person with CheapOair.co.uk. Offer valid until 2 September 2016 and includes up to 64kg baggage allowance.

Contact Kate O’Brien or Stacey Stockwell at Siren Communications on 020 7759 1150 or email caravanclub@sirencomms.com.