City to Country Life Art Project - interview with the artists 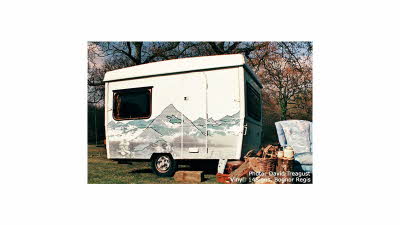 What inspires you to create your artwork?

Darren: Living in a city like London, surrounded by talented peers, there's a constant drive to create and that inspires me most of all. I have a wealth of other inspirations as well, including early 1930s' cartoons, skateboard graphics and contemporary art.

David/Badbones: I’m inspired by many different things - comic books, pop culture, other artists, a lot of pop art stuff. The team I’m around inspires me every day too. Graffiti Life as a collective is really competitive within itself and we’re always learning new ideas from each other, so that’s quite a big influence as well.

Rosie: Generally, I just love painting in all its forms, be it spray-painting, oil-painting or acrylics. I really enjoy the sense of achievement you get when you’ve created a piece that’s just come from an idea or a thought you’ve had. It ends up being this physical project, which is often totally different to what you originally had in mind. I think that’s exciting.

What makes a client interesting for you to work with?

Darren: When working with clients, I like to have the freedom to express and explore my own visual language and ideas. Rather than having a pre-made design to use, I prefer to let my ideas flow through the work.

David/Badbones: I think a good client is someone who is open to our suggestions. It’s really nice to have a brief with a little bit of leeway, so you can fire your thoughts back, rather than something that's rigid, with no room for artistic interpretation. I like clients who have really wacky ideas as well. I always say to people: 'Whatever you think of, we can do it, so try to think of something completely bizarre.' Those are the best kinds of projects to work on.

Rosie: I think it’s really interesting when clients have a strong idea about what they would like to communicate, but are brave enough to trust you as an artist and let you put your personality into the piece.

Darren: Actually, it’s kind of funny. I think I’ll answer that with ‘the elements’: the weather, the rain. Usually the strangest requests are to finish in weather conditions that aren’t quite appropriate to work in!

David/Badbones: We’ve had lots of strange requests. I've painted onto whisky barrels, cars, even livestock – that was a weird one, painting onto cows. Cows get very nervous when you’re around them and they start pooing everywhere, so we were wearing full suits and wellies to put stencils on their sides. That was quite an adventure. We’ve had lots of weird projects over the years, but that’s the best thing about our job – we get to do something new every day and work with different people and really interesting ideas.

Rosie: I recently worked on a project where we created a giant castle out of cardboard boxes. We painted all the boxes like pixels and put these into different formations to create the castle. It was about 200 boxes, so it was quite a long day, but it looked great at the end. We even made a throne inside as well.

Have you ever been on a caravanning holiday?

Darren: Indeed I have, as a youngster with my family. My memories aren't that clear, but I imagine a lot of kites, a lot of Frisbee and general fun in the sun, in fields away from city life.

David/Badbones: I haven’t, actually, and the cool thing about this project is learning a little bit more about caravanning as an option. I did stay in a caravan on a project in Norway last year, but I have never travelled around with one. That would be really fun. I've never painted one either, but I’ve always wanted to, so this is great to work on.

Rosie: Yes, I have. It wasn’t exactly a caravan, it was a camper van, but I spent three weeks driving around New Zealand.

What has been your inspiration behind the design concept for this project?

Darren: Well, I’m still working on it, but the theme behind it is going to be ‘beautifying spaces in an attempt to get away from the city and enjoy nature as it’s been intended for us.’

David/Badbones: It’s been cool because the three of us come at what we do with very diverse styles. We’ve all been arguing with each other, putting in different ideas. I think what comes out at the end is going to be amazing. I’m not going to reveal too much now, but it’s been an exciting process to reflect our own individual styles while working on one core piece together. Wait and see!

Rosie: There is still a little way to go, but I believe it’s going to be a twist between city life and life in the outdoors.

Find out more about the project