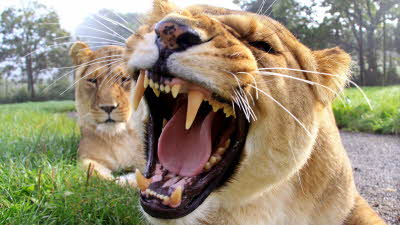 The set of photos, which were taken by Longleat keeper Ian Turner while the Wiltshire park was closed to the public, capture the amazing moment a trio of daredevil lions decided to climb to the top of a 10-metre-tall oak tree.

"I was busy taking photos of some new cubs which were venturing outside for the first time when the other keepers alerted me that something unusual was happening elsewhere in the enclosure," said Ian.

"One female seemed to be the leader and she went up first, then once she had reached the top the other two just followed her up.

"It's not unusual for one or other of the lions to climb up one of the smaller trees, but this wasn't a small tree," he added.

Despite being taller than a double-decker bus, the tree didn't seem to provide them with too much of a challenge, but it was what happened next that really took everyone by surprise.

"There wasn't a lot of room at the top and we just expected them to climb back down again," said Ian.

"However they seemed to have a different idea, and the first female simply leapt off the top.

"It all happened very quickly, but when I was able to study the images afterwards you can see that, just like a domestic cat, she was able to rotate her legs around in mid-air and land on all four paws.

"The second lion soon followed her down in similar fashion, but the third one was a lot less confident and, after spending several minutes alone up there, she decided to climb back down.

"It's something none of us have ever witnessed before and it was just total coincidence that I was there and able to capture it," he added.

Female lions usually reach their full size by the age of three. Adult lions can weigh up to 200 kgs and grow to lengths in excess of three metres.

Longleat Club site in Warminster is one of the network's most unique locations - where else in the UK or Europe can you hear lions roaring at night from the comfort of your bed?