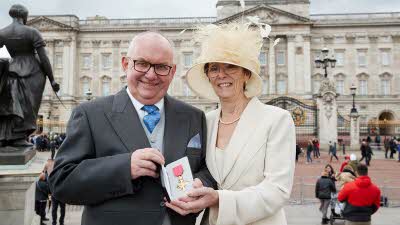 Mr Chamberlain was awarded an OBE in the New Year’s Honours 2019. He was accompanied by his wife Liz to receive his award at Buckingham Palace

Grenville Chamberlain said, “It has been the most incredible day. I am deeply moved and honoured to receive this award which I believe reflects the outstanding contribution our Club makes not only to society today but also to those less fortunate than ourselves.

The benefits are clear from the results of the work of our staff at East Grinstead and across the sites network; the dedication of our many volunteers and our loyal members who all do so much to enable their fellow members to enjoy themselves to the full.

Caravanning since the age of seven, Grenville joined the Caravan and Motorhome Club (formerly The Caravan Club) in 1981. Throughout his 37 years of dedicated commitment to the organisation he has participated in the full breadth of Club activities, not only in the UK, but also internationally with the Federation Internationale de l’Automobile (FIA) to champion road safety initiatives and awareness.

Grenville served on various Club Centres, Councils and Committees and was elected Club Chairman in October 2007. He tours some 12,000 miles each year with his family and spends over 40 weekends each year attending Club events and supporting members.

Nick Lomas, Caravan and Motorhome Club Director General said, “Grenville is admired and held in high regard by Club members, staff and fellow Committee members because of the care, patience, skill, leadership and long hours that he devotes to the Club.  He is a true example of one who is more than worthy of a lasting recognition for his selfless devotion to the Club and to charitable causes.”

One of Grenville’s sporting passions is cycling and he led a Club team of 140 riders in the London to Brighton Bike Ride in 2010 that raised £42,000 for the British Heart Foundation (BHF), which was his Chairman’s nominated charity. He then raised £103,000 over a three-year period for BHF.