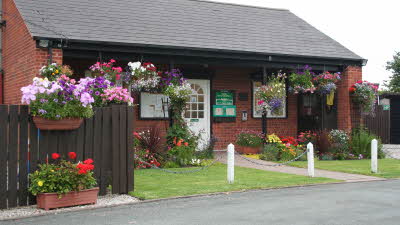 Chester Fairoaks Caravan Club Site, which is surrounded by a border of oak trees and close to the delightful walled city of Chester, has taken top honours at The Caravan Club ‘Sites in Bloom’ 2014 competition.

Its bright floral presentation according to the judges; “makes the reception area look like a country cottage garden, including traditional rose bushes, ornamental grasses and the friendly faces of pansies”.

The Sites in Bloom Awards were introduced in 2003 by Executive Member and Caravan Club Life Member, the late Alan Payne OBE, who wished to recognise the creative and horticultural skills of site wardens and volunteers, and to showcase their success in making their sites colourful and welcoming.

Grenville Chamberlain, Caravan Club Chairman, presented site wardens, Simon and Becky Allen with the magnificent Alan Payne Trophy for their fantastic horticultural achievement, at an awards ceremony at the House of Commons on Tuesday 25 November.

Runners up were: Buxton Caravan Club Site hidden away on the site of a former quarry, where judges were particularly taken by the “brightly co-ordinated baskets that brighten up the shower blocks, with oranges and yellows and striking lime green creeping jenny along with the fiery red and pink welcome at reception”, and Blackshaw Moor and Tewkesbury Abbey both impressed the judging panel and have been awarded joint third place for their “adorned reception areas!”

Chamberlain commented, “Our site wardens are very busy people so we are extremely grateful for the time and effort that they put into making sure our members and visitors get the most out of their stay on site.”

The displays were evaluated using criteria including layout and creative use of space, variety, innovation, flair and colour coordination, with particular attention being paid to economy and low maintenance. The geographical location of the site is also taken into account by the judges and the fact that plant species are chosen to suit the local environment.