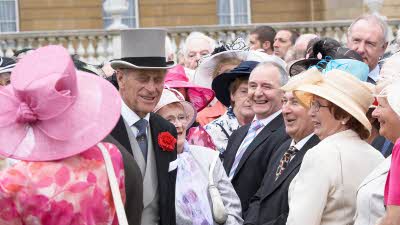 The Caravan and Motorhome Club is saddened to hear of the death of its Patron, HRH The Prince Philip, Duke of Edinburgh, KG, KT.

Prince Philip, who became Patron in 1952, showed an active interest in the Club throughout his tenure, visiting sites on a number of occasions and welcoming members to a Royal Garden Party at Buckingham Palace in 2007.

In 1955 the Club presented the Royal Family with a bespoke miniature caravan intended for use by Prince Charles and Princess Anne. As reported in the The History of the Caravan Club by Christine Ellis, the “Club entourage of four was treated to the sight of Prince Philip towing the caravan around the [Buckingham] Palace garden with a Hillman Husky”. The ’Royal Caravan’ – which returned to the Palace for an exhibition in 2014 – can still be seen by visitors to the Club’s collection at the National Motor Museum, Beaulieu.

In 1973 then-Club Chairman David Knight escorted The Queen and Duke around the Club’s Yellowcraig campsite in Scotland, and Prince Philip re-opened the Sandringham site, on the Royal estate, following its refurbishment in 1997.

The Duke also spoke to several members at Abbey Wood Club site (the Club’s Golden Jubilee site for England) following its renovation in 2002. At the time he said, “I have tremendous admiration for The Caravan Club and its sites”. To mark 50 years of Royal patronage, the Club Chairman, Bob Black MBE presented His Royal Highness with a silver scale model of The Wanderer – the first purpose-built leisure caravan (built in the 1880s for Club founder Dr William Gordon Stables).

Five years later Prince Philip wrote a personal introduction to the Club’s history, published to mark its Centenary. He said, “Starting the club must have seemed a good idea at the time, but it is very doubtful that the founders ever imagined that it would grow into such a massive organisation. I have no doubt that they would be delighted to know about the huge number of sites which it has established for the members.”

The same year, The Queen gave permission for a Royal Garden Party to be held at Buckingham Palace, which the Duke hosted. The Duke spent most of the afternoon at the event, delighting the crowd and speaking informally to groups of members.

“His Royal Highness shared our passion for the great outdoors and he was always keen to encourage active use and enjoyment of the countryside in a responsible way. He believed that organisations like the Club with a volunteer ethos and good governance could educate, inform and promote the countryside and that is why we have valued his patronage for so many years.” said Nick Lomas, Director General

In discussion with staff and Committee members His Royal Highness showed a considerable understanding of the workings of the Club, its history and commercial success. His support and commitment over the course of some eight decades will be sorely missed. The Club wishes to send its sincerest condolences to Her Majesty The Queen and the rest of the Royal Family.