A Few Days at Henley on Thames Initially I could only book Henley Four Oaks for three days as there was little availability. When I went back later there suddenly seemed to be plenty of space so I extended our stay to five days. At first, I didn’t really understand why, suddenly there should be so much space until I cottoned on the fact that it coincided with the fuel shortages. A fact later confirmed by the site wardens who told me that not only had they had a lot of cancellations but also members were leaving the site early because of the fuel situation.

Rather than use the M40 we had travelled across country from Oxford which was a route we had used when we caravanned. When we arrived there was a good choice of pitches so we didn’t need to be near the road which is notoriously noisy which was a bonus. During our stay the weather was kind to us and we were able to sit out in the sun several times.

Four Oakes is about a mile from the centre of Henley. On our first day we walked into the town, via the riverside to the bridge. We are both convinced that as we have got older the walk has got longer! Having had a look round we had a coffee and did a bit of shopping before making our way back to the site. The following day we walked towards Henley but opposite the Rugby Club took the path down the river. There is no access to the town from here, unless you swim! In the opposite direction there is a distant view of Temple Island. On the way back we stopped at the café at the Swiss Farm campsite for a coffee and sandwich, very convenient! Day three and we were on a mission to use some restaurant vouchers we had acquired via Tesco Club Card points. To their credit Tesco had extended the deadline several times because of COVID. We had a nice meal at Zizzi in the town. Feeling a bit full we took the bus back to Swiss Farm and so only had a short walk back to the site.

We were a bit lazy on our final day which was spent around the van. On the day of departure we retraced our route back to Oxford and the A34 north and home to MK.

I meant to comment previously. Thanks for the story and photos. We've often driven through Henley but have never stopped there. It looks a bit quieter on your photos than at some times of the year David, so worth remembering if we ever do make a stop. If you do stop at The Henley site try and get a pitch at the rear of the site, as the road past the site is at times very noisy, 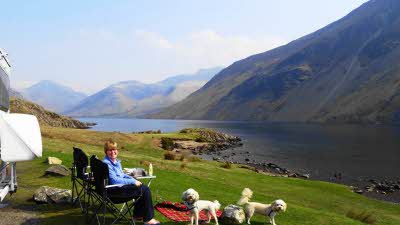