A motorhome featuring an island double bed at the rear which measures under seven metres in length is fairly unusual. Nick Harding finds out what else the McLouis Fusion 367 has going for it.

Italian marque McLouis was re-introduced by the Auto-Sleepers Group in time for the 2019 season. From an initial five-model line-up, there’s the promise of more to come. Here we take a look at perhaps the most interesting of the current crop – the 367, which squeezes a rear bedroom with island double into an overall body length that's a shade under 7m. You’d normally expect such a floorplan to be some 50cm longer.

Most motorhomes these days seem to start at what looks like an attractive price, before you are bombarded with wallet-punishing packs of options. Here, the Lux Pack comes as standard, including stereo system with DAB radio and reversing camera, 120W solar panel, cab blinds, leisure battery and removable floor carpets, as well as a Winter Pack of insulated waste water tank and frost-resistant outlet. That means what you see is very much what you get. 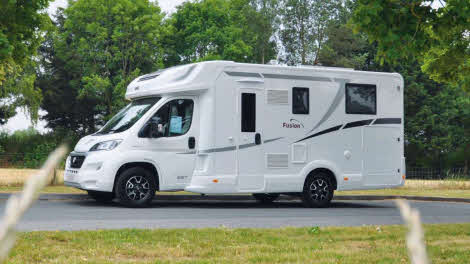 If you were to characterise any Italian-built motorhome, key themes would be state-of-the-art build, keen pricing and a touch of flair. McLouis doesn’t stray
from this formula. Alloy wheels are standard, as are flush-fitting windows and fixings for a bike rack – unusual, considering a big selling point is surely the huge garage storage area with commendably generous doors each side.

It’s all configured for use on roads and campsites in the United Kingdom, with the habitation door on our nearside. The bodywork is timber-free and GRP-clad, while the roof and underbody are also GRP. Payload isn’t particularly generous, but there are options to upgrade. A little surprisingly, McLouis is rather light on its warranties – five years for water ingress, two for habitation and three for the base vehicle. 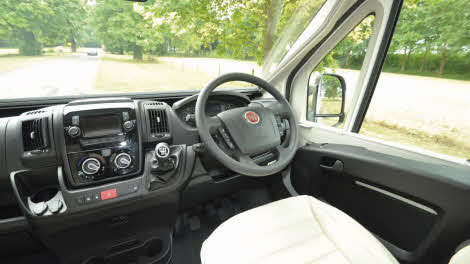 Fiat’s latest 140bhp engine as standard is a welcome offering and I’d suggest most drivers will find it has sufficient oomph. There are no optional power upgrades but nine-speed automatic transmission is an extra £2,000.

Handling and road holding are as surefooted and reassuring as you’d expect from the venerable Ducato, which has long been the go-to base vehicle for coachbuilt motorhomes. The cab is well equipped – the usual, expected goodies are all here along with the aforementioned, excellent DAB radio/stereo system with reversing camera, steering wheel controls and air conditioning. 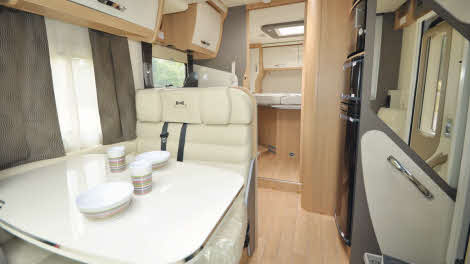 Faux leather is the standard and, surprisingly, only upholstery option. The cab seat covers are removable, though, should you wish to revert to the standard Fiat fabrics. What I do like is the larger-than-average, opening over-cab sunroof, with proper lockers either side and open shelving across the front.

The floorplan is typical, with all the seating up front. There is an L-shaped rear settee that can be adapted to create a travel seat for two (note: the headrests lack adjustment) plus there is a fifth, rear-facing travel seat adjacent to the habitation door. The table is a bit of a bugbear as it sits a little tall on its fixed pedestal leg, although it’s otherwise easily adjustable fore and aft.

Truma’s Combi 6, housed in its own locker accessed via the garage, provides the heating and hot water. 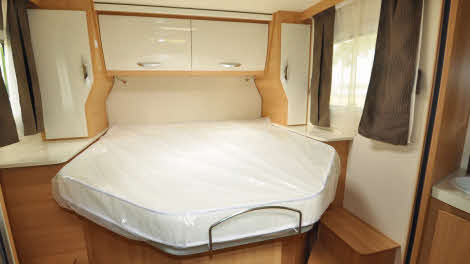 Fitting in two double beds is quite an achievement in any motorhome. At the back, the island bed is raised (for optimal garage space below) which means you’ll struggle to sit upright, despite a mattress section that can be angled.

There are two rather deep lockers across the back of the motorhome, with his and hers wardrobes (the offside one is slightly larger than the nearside), plus always-useful bedside ledges. The comfortable one-piece mattress sits on a metal frame with sprung slats, and a hinged section gives access to storage at the end of the bed. Overhead is a mini Heki rooflight, while a sliding door provides privacy.

Then there’s the double bed over the lounge that simply glides down electrically and has a ladder for access. It’s shaped but it does still cut across the main door when lowered. 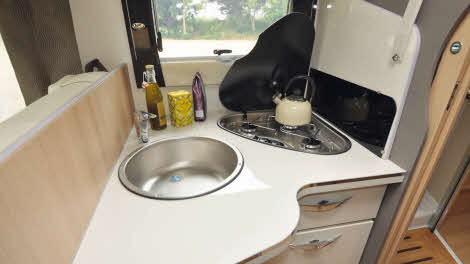 The circular stainless steel sink and triangular, three-ring gas hob combination isn’t the most efficient in optimising worktop space and there isn’t an extension. There’s no spark ignition for the hob either, but an extractor unit is a welcome addition.

Storage includes a single locker overhead, two drawers and a floor-level locker (where you’ll find the gas isolation taps), plus a slim locker under the sink – shelving goes all the way back to the wall and there’s a handy, slide-out chrome-sided tray.

A 150-litre Thetford fridge/freezer is across the corridor below a Dometic grill/mini oven which is at a height most folk will find convenient. A slide-out bracket for a flatscreen television over this allows – in theory, at least – for watching TV from the lounge or bedroom. 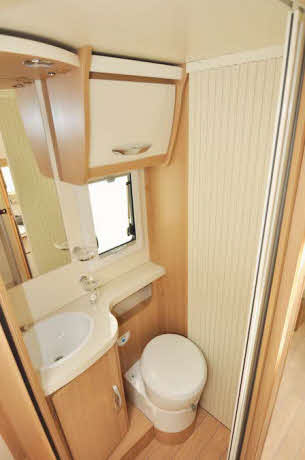 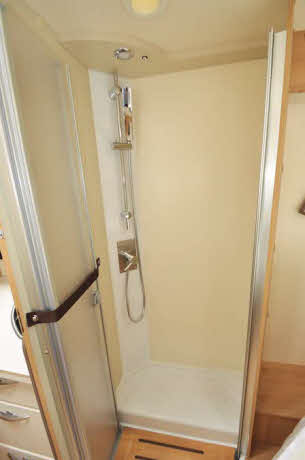 En-suite to the bedroom, bathroom facilities are split between a tambour-doored toilet room on the nearside and shower cubicle opposite. The swivel-bowl toilet is set at a good height but you’ll want to check legroom for yourselves. There’s a fixed, oval basin, plus decent storage – a good-sized locker under the sink is where you’ll also find a toilet roll holder and there’s a second cupboard overhead.
A mirror adds to the feeling of space while a translucent window provides ventilation. Toothbrush mug and soap holders are handy.

Across the corridor, there are folding doors for the shower, which has a riser bar. The cubicle is set over the wheel arch, so there’s a small step. The loose, wooden duckboard should prove useful post-shower, but there’s just the one, small-diameter plughole. 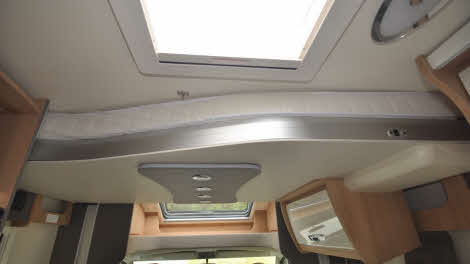 There’s a good roll-call of LED lighting (direct and ambient), sockets (including USBs) and overhead lockers with particularly light-to-use catches. Other points of note range from memory foam seating and bedding to acrylic panelling around the kitchen window to the waste bin in the habitation door, which in turn has double locking points and a double inset step.

Competition in the motorhome market is fierce with so many different makes and models from which to choose. Credit to McLouis, then, for pulling out something slightly different with the 367. Including the Lux Pack as standard is a massive plus.

(figures correct when tested in August 2020) 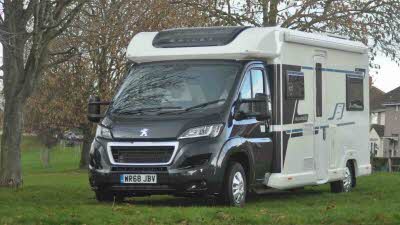 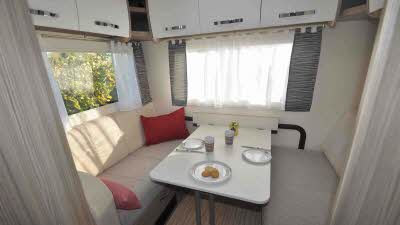