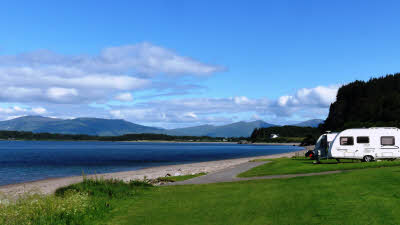 The increase in spend for 2016 supports the equivalent of more than 680 full-time jobs in Scotland, a number that has grown from 650 in 2015. Plus, The Caravan Club’s network of Scottish sites, including the smaller, privately-owned five-van only Certificated Locations, account for more than two million touring bed nights per annum. These sites are located in some of the most beautiful parts of the world such as North Ledaig Caravan Club Site which is situated on the sandy and shingle beach on Ardmucknish Bay.

Around 70 per cent of tourists staying on The Caravan Club’s sites in Scotland are from outwith the country, demonstrating the extensive inbound tourism contribution that caravanning, motorhoming and camping makes to the Scottish economy. Overall, the sector is worth an estimated £700 million annually to the area according to a report by The Scottish Caravan and Camping Forum.

High-profile films such as The BFG featuring the Isle of Skye, Netflix’s blockbuster series The Crown being filmed in locations across Aberdeenshire including Dundarg Castle, Fraserburgh and Slain’s Castle and the increasing appeal of the Edinburgh International Festival have all contributed to the upswing in spend and visits to the area by members of The Caravan Club.

To continue to support the booming outdoor leisure business in Scotland, The Caravan Club has opened two new multi-million pound site developments at Strathclyde Country Park near Glasgow and Stonehaven Queen Elizabeth Park in Aberdeenshire. These investments are in addition to the £1million spend across its network on site refurbishments and improvements throughout the UK every year.

Nick Lomas, Director General at The Caravan Club commented: “The Caravan Club has long been recognised as an important contributor to Scottish tourism, and we are pleased to see that our members continue to both visit and spend more in the region. From the breathtaking scenery of the Highlands down to a wide range of coastal walks, Scotland is a fantastic holiday location for anyone who wants to get closer to nature or experience some of the best culture in the world. By investing in our sites and continuing to enhance the experiences on offer to those travelling with The Caravan Club to Scotland, we’re excited to see our investments aiding further tourism growth and support for the local economy.”

The two new recently opened Caravan Club sites in Scotland feature a host of state-of-the-art facilities. The 157-pitch – including 45 camping spaces – Strathclyde Country Park Site near Glasgow offers a wealth of activities for fans of the outdoors, from country walks to cycling and bird watching –and while on site, a playground will keep the little ones entertained. Stonehaven Queen Elizabeth Park Site, offering 81 pitches and space for camping, is located in the heart of Stonehaven Bay, just a short walk from the picturesque harbour town of Stonehaven and offers a host of activities on-site including tennis and golf.

To find out more about The Caravan Club’s Scottish sites, visit stand 4001 at The Scottish Caravan, Motorhome & Holiday Show at SECC Glasgow from 2 to 5 February 2017.

For more information please contact The Caravan Club on 01342 326 944 or visit www.caravanclub.co.uk/scotland.

Caravan Club membership is just £49 per year and provides members with access to over 200 Club sites and 2,500 privately owned places to stay in the UK. It also offers a choice of over 250 sites across Europe including France, Spain and Germany amongst other destinations. All members can take advantage of expert advice, overseas travel services, financial services and exclusive member offers and discounts. There is no membership requirement for campers who want to pitch up at over 40 Caravan Club sites.

For further information about becoming a member of The Caravan Club please visit www.caravanclub.co.uk or call 01342 318 813.