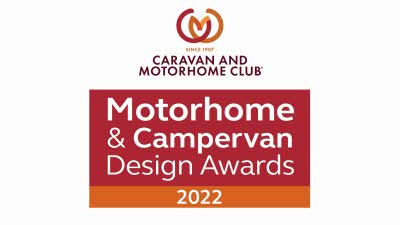 The results of the twenty-third Caravan and Motorhome Club Motorhome and Campervan Design Awards were announced today.

Judging took place during the Caravan, Camping & Motorhome Show at the NEC in February and via desktop assessment prior to viewing the vehicles. Seventy-two vehicles were submitted for the Motorhome and Campervan Design Awards. The Competition provides the best quality, and quantity, of information to members and buyers.

The assessment criteria included electrics and safety, comfort, kitchen/washrooms, air conditioning, heating and ventilation systems, technical aspects and stowage. Although the judges did not drive the vehicles, the scoring of the vehicles still evaluated driving elements such as seating positions, handbrake positions, visibility, safety whilst travelling in habitation area, front-seat comfort and driver ergonomics.  Before going to the NEC, the expert panel collectively spent over one thousand hours going through an immense amount of data from websites, brochures, handbooks and entry forms to complete in-depth evaluations via desktop -  the judges then went to the NEC to physically view the vehicles to complete this comprehensive judging process.

Nick Lomas, Director General of the Caravan and Motorhome Club said, “Our congratulations to all the winners.  The Caravan and Motorhome Club organises this competition and compiles the data based on the important considerations when buying a motorhome or campervan.  This invaluable source of information will provide people with the information they will need to help with their next motorhome or campervan purchase.  We hope it will inspire many people to look at leisure vehicle holidays as an option to explore, have adventures and great holidays.”

Grenville Chamberlain OBE, Chairman of the Caravan and Motorhome Club, who announced the results commented, “Our sincere thanks go to the industry for their continued support of this event.  Huge congratulations to all the worthy winners.”

A Class over 8 metres
Frankia I 8400 Plus Platin

A Class over 8 metres
Carthago chic c-line Mercedes-Benz Sprinter I 6.2 XL QB
Frankia I 8400 Plus Platin

For more information about the entrants in the Motorhome and Campervan Design Awards 2022 visit www.camc.com/motorhomedesignawards.

For more information on the Caravan and Motorhome Club, please visit www.camc.com

The panel of experts:

Dan has been a passionate caravan and motorhome advocate since 1989 when as an eight-year-old child he spent a wonderful week in a 1950's Willerby Wisp. Dan founded CaravanTimes in 2010 and has been there ever since. Dan is also a self-confessed petrol head and has been chief car tester and motorbike journalist at CaravanTimes since it started.

A Club member since 1987, Andrew has been towing his own caravan since he was 17 years old. Since then, he has towed a variety of outfits many thousands of miles as well as extensively holidaying and reviewing motorhomes.

Martin is a writer, green activist and lifelong campervanner. He presented the BBC 2 show ‘One Man and his Campervan’ in 2011 and was guest judge on ‘Caravanner of the Year’ in 2016. Martin writes best-selling books about camping, including ‘Take the Slow Road’, a series covering driving beautiful routes.

Sammy Faircloth comes from a family of devoted caravan and motorhome enthusiasts and loves nothing more than touring with her family in the UK and abroad.  For the last six years she has written for the Caravan and Motorhome Club magazine and more recently joined the judging panel.  Her passion is her caravan and the great outdoors!

Mel and Ryan are dedicated motorhomers.  Mel and Ryan produce the YouTube vlog 'OvernightersTV' sharing their motorhoming adventures.  Ryan has appeared in TV shows such as Rosemary and Thyme, EastEnders and London's Burning, as well as touring UK theatres with Blood Brothers and most recently with Dickens Theatre Company.

A degree-qualified engineer, Martin’s been Club Technical Manager for 22 years overseeing practical advice for members while undertaking extensive industry engagement, government consultations and work on national/international standards development. His knowledge is underpinned by caravanning since the age of seven around most of the UK and Western Europe, and most recently motorhoming in Australia.

Champions of the great outdoors – from glamping to touring –  the Caravan and Motorhome Club represents the interests of around one million caravan, motorhome, campervan and trailer tent owners across the UK. Founded in 1907, the Caravan and Motorhome Club has a wealth of experience and prides itself on offering great value and high quality campsites for tourers and glampers.

Caravan and Motorhome Club membership is just £56 per year and provides members with access to 2700 quality campsites in the UK and overseas. The Club offers over 300 campsites across 14 countries in Europe including France, Spain and Italy amongst other destinations. Stays at these sites can be packaged with great ferry offers to create holidays that are protected by ABTA. The Club also offers a range of escorted and independent tours in Europe, Australasia, North America and Southern Africa, all of which are protected by ABTA. All members can take advantage of expert advice, overseas travel services, cover and insurance and exclusive member offers and discounts.

The Club offers a choice of glamping accommodation and tent camping through its Experience Freedom operation, all of which are available to non-members. Caravan and Motorhome Club members receive a 10% discount on glamping. To find out more about Experience Freedom, visit www.experiencefreedom.co.uk

For press information, interview requests and imagery, please contact Nikki Nichol, external communications and sponsorship manager at the Caravan and Motorhome Club on 07771 834 443 or via email: nikki.nichol@camc.com

For press information, please email Zoe Poulton and Helen Coop at camc@fourcommunications.com or call Zoe on 07891 423 440.