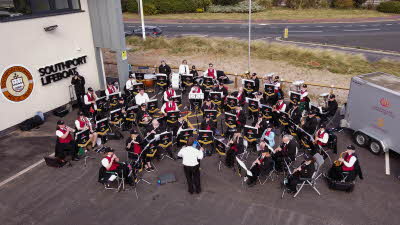 Over the Easter weekend members travelled to Southport to join the Festival of the North 2022 (the 10th anniversary of the festival, hosted by South Lancs Centre), managing to fit in full rehearsals, an outdoor session for the local lifeboat open day, plus a full ‘Proms’ concert and Easter service for ralliers.

It was also a weekend of firsts. This was not only the first proms night for many new players, but also the first as Musical Director for conductor Chris Cobon. The occasion was marked by a surprise presentation of a commemorative embroidery to Chris, created by Lois Parker. Also on stage, new vocalist Crystal Hellend – normally found in the cornet section or working as the band’s librarian – led the singing, making a big impression on band and audience alike. Additionally, Emma Orcott was introduced as a new conductor, rehearsing and conducting a superb Hans Zimmer medley. Emma is no stranger to the band, having first performed with the group almost 30 years ago. Now, when not conducting, she plays alongside her daughter Maddy and father Rob Heath.

Band Chairman Ian Clowes commented, “Young families are the future of the band. Seeing Emma return with her own young family was an emotional moment for everyone and is a clear sign the band is stronger than ever.” The band will celebrate its 30th anniversary in 2023 with a busy programme. Its Facebook page contains information for new players, stories and video performances. You can also contact the band to discuss support for your own Club event or if you would like to join in.