Meet an icon. The California is one of the most recognizable campervans in the UK. My testing included a week away in Cornwall, where the Cali was perfectly at home on the surfing scene. This California is called Ocean (there’s also a Beach model which is more MPV-like and lacks a lot of the facilities of the Ocean) and this version on test is based on the T6 version of the Transporter (since this review VW have launched an updated T6.1 version).

Taken from the June 2016 edition of the Club Magazine 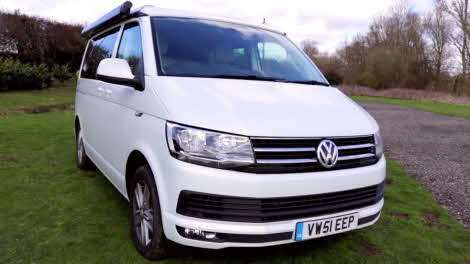 High production standards are clear throughout. There’s none of the cheap carpet lining you get in so many campers, for instance. Instead, you can admire the furniture construction and quality mouldings, along with fittings such as the integral roller blinds.

There are 12 great colours available. This is the Oryx White, one of two pearlescent finishes (the other is black, probably not ideal for a camper) that add an extra £606 to the asking price. Other options fitted here are the awning (£396), front and rear parking sensors (£420), Light and Vision Pack (£228), privacy glass (£288) and removable towbar (£570).

However, the Achilles heel of the California (for many) is that the conversion is not switched for the UK – hence the sliding door is on the driver’s side and the furniture unit on the nearside. Usefully, that door is auto- latching (ie it closes itself rather than relying on the kind of slam that can upset your neighbours on the campsite). Indeed, even the cab doors seem to close with a more reassuring thunk than those on the standard T6 van. 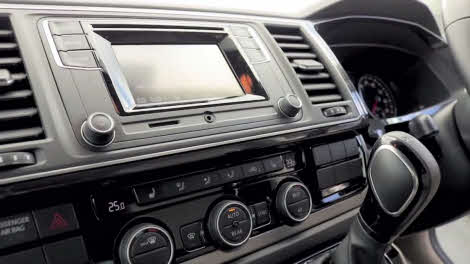 Early T6s used the same engines as the outgoing T5, but now they’re all-new Euro VI units – and the bi-turbo 202bhp is a peach. I wonder whether the  smarter money will stay with the 148bhp version (which I’ve yet to drive) – there’s every reason to expect this to be an excellent alternative.

Be careful when it comes to ordering your cab seats – if you go for height adjustability (as on this example), you lose the all-important swivel facility. The rear seat isn’t as comfortable as it looks, either. My rear seat passengers reckoned there should be more contouring for better support. 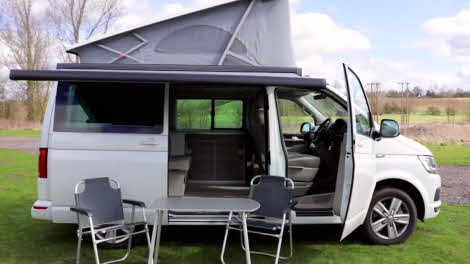 Very little has changed on the conversion side – maybe there was little that needed improving. You still get the neat slide-out internal table on its rail. There’s a second table that stows unobtrusively in the sliding door, ready for use outside along with the twin camping chairs that have their home in a zipped canvas bag on the tailgate.

The heating system has a handy remote control and timing facility, but even this  is eclipsed by the star feature – the electrically-operated elevating roof. This isn’t just a party piece – it really does make a difference being able to raise and lower the roof by simply holding a switch.

If this were my California, I’d be after  a drive-away awning (an inflatable model), to enhance on-site living and storage space. 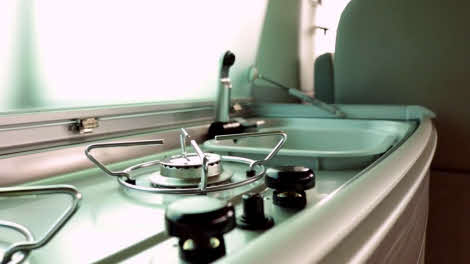 The washing-up bowl sums up the quality of this camper – it’s not cheap plastic. Ditto the glass cover for the two-ring hob and sink combination unit. Storage is one aspect where California’s designers haven’t quite got it right. Apart from in the 42-litre top-loading fridge, there’s nowhere to stow a bottle of wine upright, for example.

Perhaps the California’s designers have missed a trick – there’s no locker large enough to accommodate a portable toilet, something rivals may be quick to point out. Drop the headrests, release and pull forward the whole seat, then tug on the backrest strap and it all folds flat for the downstairs bed. At 6ft 7in x 3ft 9in it’s not the widest, and one of the joins was in an awkward position for me. I’d be seriously considering the mattress topper option, though storing it might need some thought.

You could also consider the double above as the main bed. It’s a bit of a clamber up here, but i t’s slightly bigger.

As is often the case in an elevating-roof camper, despite a number of individually-switched units, illumination never seemed quite right. There’s no central lamp, but there are units spread along both sides, and just the one bulb on a stick to serve both the cab seats. A single switch to turn off all lights from your bed would be a plus, too.

Also, there are only single mains and 12V sockets in the living area.

Not bad for a 60-year-old? It’s hard to believe the first VW camper rolled out all those decades ago. The Ocean is the most powerful, safest, best equipped and, crucially, most expensive version yet. 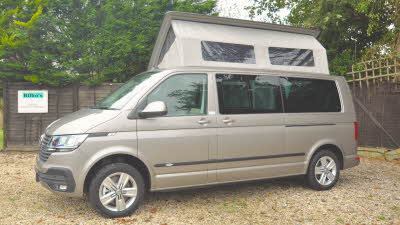 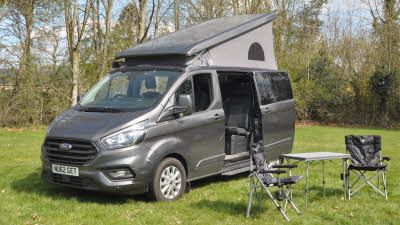 (Figures correct when tested in June 2016)