A favourite among caravan-owners, James Batchelor tests the latest version of the Sportage with hybrid electric technology

The Sportage has done much to transform Kia’s image here in the UK. The 2010 third-generation Sportage, with its styling by the designer of the Audi TT, no less, changed the South Korean manufacturer’s image practically overnight from a maker of cheap and cheerful cars to a builder of desirable family cars.

As well as appealing to families and being a regular in the UK best-selling car charts, the Sportage has now been a favourite among caravan-owners for some time. So, with a brand-new version arriving in showrooms, we were keen to find out if the latest model still impresses. 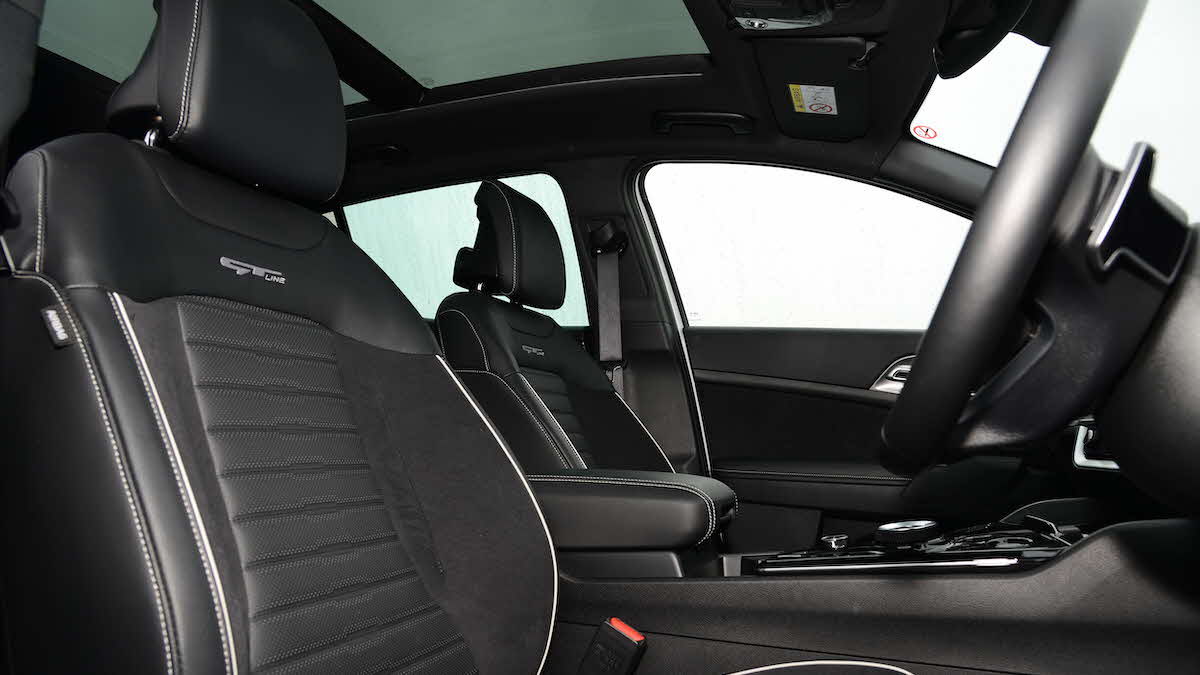 That 2010 Sportage was a seminal car for Kia as it showed the company could do daring designs with well-engineered cars, while still offering the key quality Kia was known for: value for money.

Quite a lot has changed in the last decade, particularly with Kia spearheading the current electric car revolution, but the new Sportage is refreshingly constant. The exterior design is as jaw-dropping as in 2010, but instead of favouring head-turning style and graceful good looks, the designers have gone for a more aggressive, appearance. With its large grille that extends right across the front of the car, intersecting LED daytime running lights that look like fangs, and sharp creases, the Sportage is impressively bold. It makes some of its rivals, like the Volkswagen Tiguan, look a little dated, but probably more so most caravans that’ll be hitched to it.

The interior is just as eye-catching. Base models get by with a small infotainment screen and analogue dials, but mid-grade models and above pamper the driver with twin screens that stretch across the upper part of the dashboard, aping a Mercedes or a BMW. The main infotainment

display is simple to use with crisp graphics, and there’s even a third screen which switches between the ventilation and media, nav and menu controls, making the interior feel less fussy.

There’s also a rotary knob for the gear-selector rather than a traditional lever to keep the interior looking minimalist.

Standard equipment is good, with Apple CarPlay and Android Auto smartphone connectivity, LED headlights, a reversing camera and parking sensors, while our GT-Line S model indulged with some properly premium features such as heated and cooling seats, a 360˚ parking camera and a high-end Harman Kardon stereo system. It even had the nifty Remote Smart Parking Assist feature, which allows you to manoeuvre the car in and out of tight parking spaces using controls on the key while you stand outside.

There’s not just style in the cabin, but some real substance, with a quality feel to the plastics and plenty of storage cubbies. The front seats are hard, but not overly so, and offer good support on long journeys. However, they are unusually low down for an SUV. High window lines give the feeling you’re driving a spacious hatchback rather than an SUV, and I would have liked a bit more adjustment in the steering column. But, generally speaking, the Sportage is a comfortable place to be.

Back seat passengers won’t have any complaints, though, as there’s plenty of room for a couple of six-footers or three children – even cars with a panoramic roof don’t eat into headroom. However, it’s the thoughtful little touches that delight, such as coat-hangers and USB-C charge points on the backs of the seats – families have been considered here. It’s just a shame that the back windows are a little on the shallow side – we’d imagine children might struggle to look out, and it would feel slightly claustrophobic without the sunroof.

Boot space is very good for the class, with between 526 and 591 litres on offer depending on engine choice, rising to over 1,700 litres with the seats down. The floor is flat with no annoying load lip and the seats fold via handles in the boot. 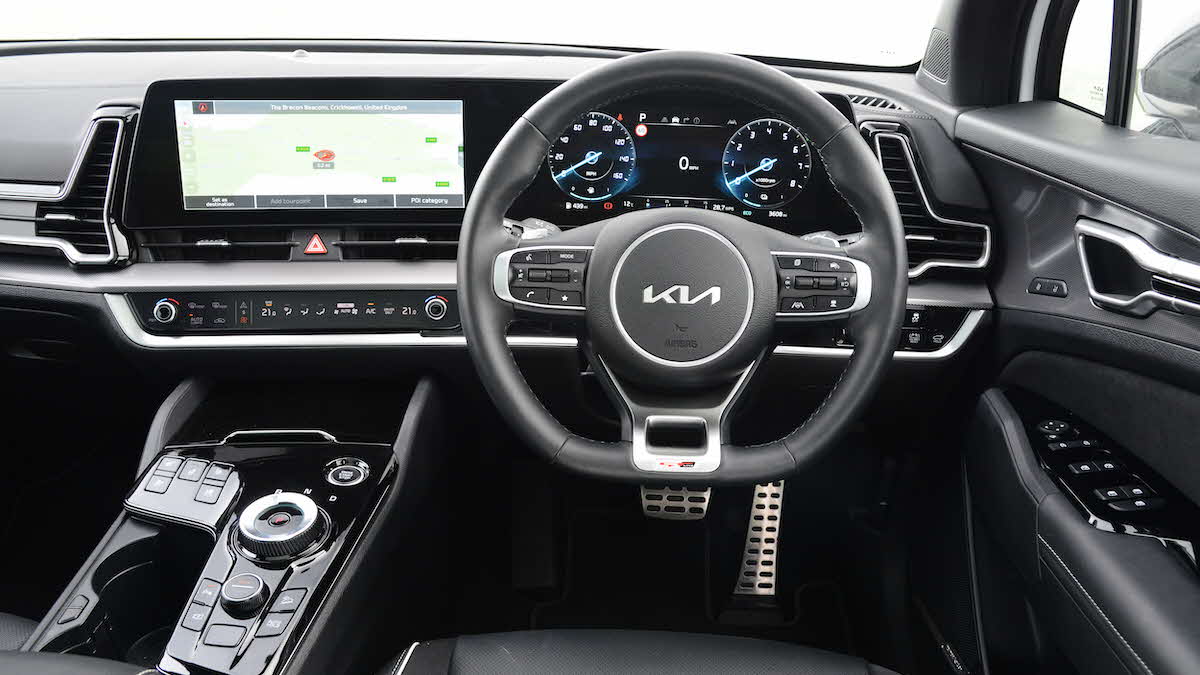 Aside from producing a pure-electric version, Kia has covered all bases by offering virtually every powertrain possible with the new Sportage. There’s a 1.6-litre turbo petrol, while a 1.6-litre turbo petrol mild-hybrid (a tiny electric motor supports the engine when accelerating and cruising but doesn’t power the car) offers the choice of two- or four-wheel drive.

There’s a full hybrid and even a plug-in hybrid that offers over 40 miles of pure-electric range, and – unlike quite a few rival carmakers – Kia offers not one but two diesel engines. There’s a standard 1.6 or a slightly more powerful mild-hybrid with two- or four-wheel drive.

We tested the full hybrid – sometimes referred to as a ‘self-charging hybrid’. It uses the 1.6-litre petrol as found in other Sportages, but pairs it with a 59bhp electric motor and a 1.49kWh battery. That combination gives an impressive 226bhp and performance is suitably punchy – 7.7 seconds to 60mph in the two-wheel drive version and around 8 seconds for the four-wheel drive we were testing.

Kia’s experience with other hybrid models in the past shows as the Sportage Hybrid neatly flits between petrol and electric power. In fact, unlike a lot of hybrids, the Sportage tries to prioritise electric power as often as it can, boosting fuel economy (we averaged 40mpg when driving solo). It’s just a shame the six-speed automatic gearbox behaves more like a CVT (continuously variable transmission) – it’s far too hesitant, and has a tendency to send the revs to the red line when you’re driving quickly.

Better, then, to keep to a leisurely pace; the Sportage is a quiet and very refined car, with tidy handling and polished road manners. The ride is a little on the firm side but it’s never harsh, and it makes the car feel tighter when cornering. 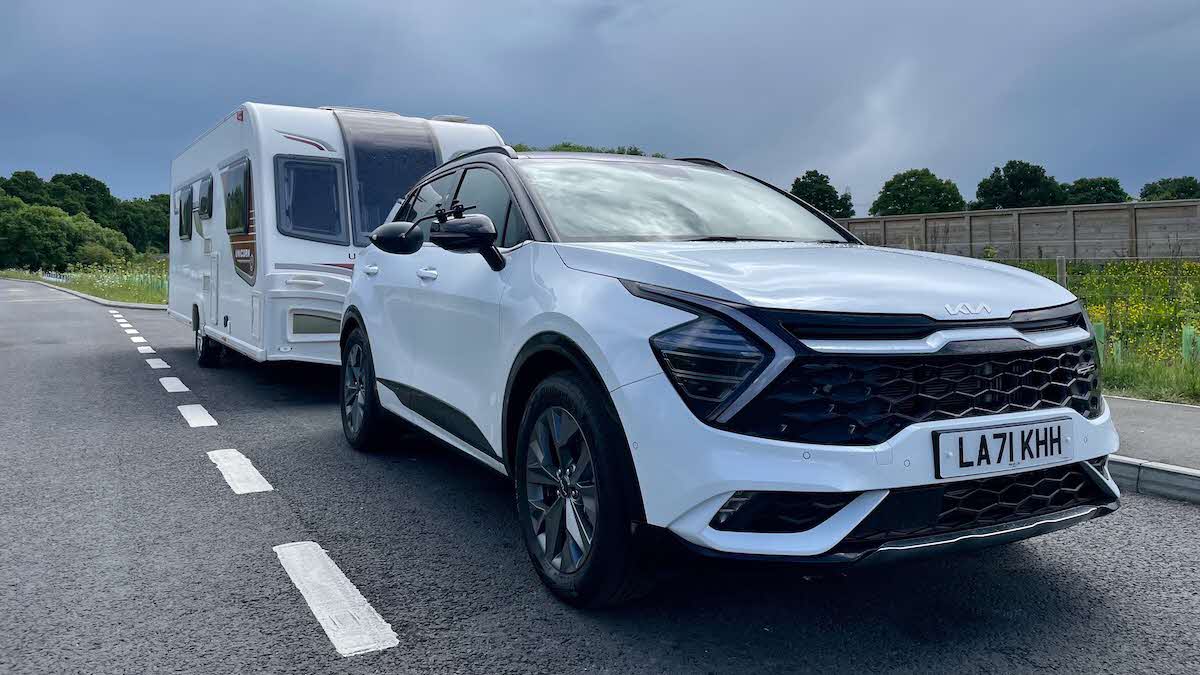 That 226bhp is backed up by a healthy 350Nm of torque, meaning acceleration is brisk at all speeds – it’s particularly impressive between 40 and 60mph when towing. Even when hitched, EV mode is still prioritised as much as possible – something we weren’t expecting to see. The bonus was very decent full economy – our test route when hitched gave 26mpg.

When towing, the gearbox’s tendency to dither is slightly exacerbated. But, that aside, the Sportage is an unflustered steer. During our test drive we were caught in a heavy storm, and the Sportage was unfazed by strong winds and flooded roads. Four-wheel drive versions get ‘Terrain’ settings which add ‘Snow’, ‘Mud’ and ‘Sand’ modes and tweak the all-wheel drive system accordingly – a handy feature in inclement conditions on the road or on a campsite. 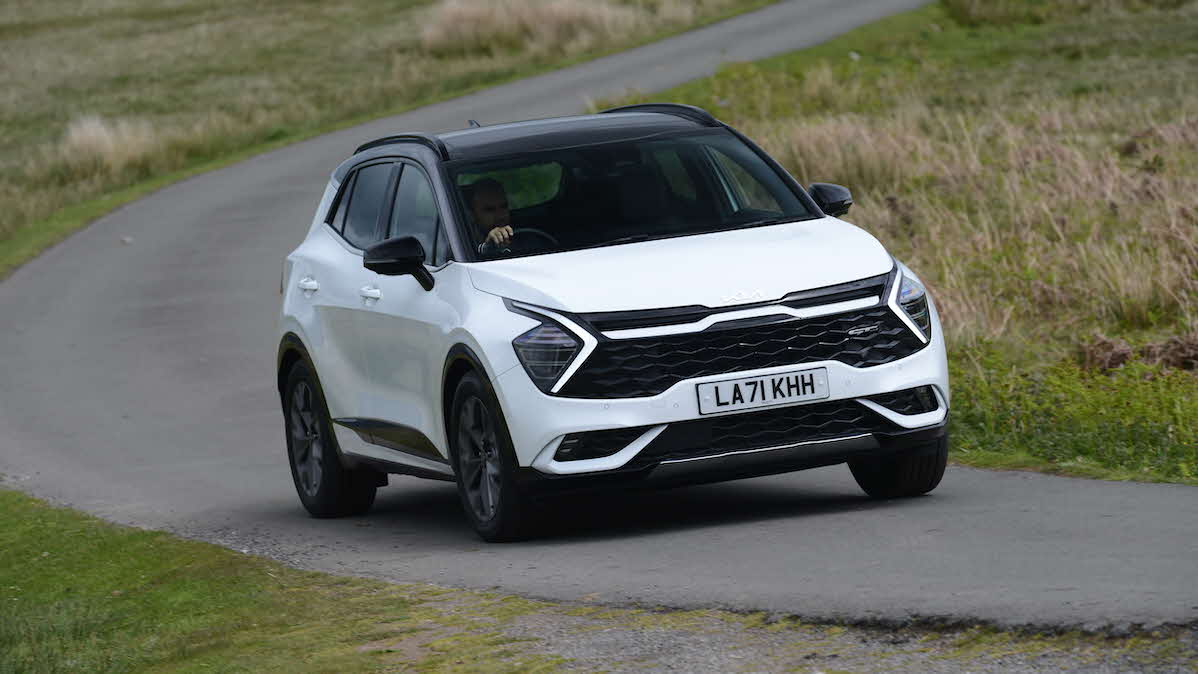 Refreshingly bold in a market that’s saturated with conventional small SUVs, the Sportage has plenty going for it. While it’s no longer the cheap option, the Sportage’s blend of great tech, a quality interior, plentiful range of powertrains and a seven-year warranty, means it remains an excellent choice for caravan-owners.