There was once a time when an SUV (sports utility vehicle) was something a bit different. The term was applied to cars that boasted the off-road ability of a 4x4 but had a slightly sporting, easier-to-live-with character.

Over the years the SUV tag has been watered down somewhat and is now applied to a vast range of cars. However, the Mazda CX-5 could lay claim to being a true SUV more than most, especially with its involving driving experience. The Japanese carmaker has overhauled it this year and I was keen to see the result. 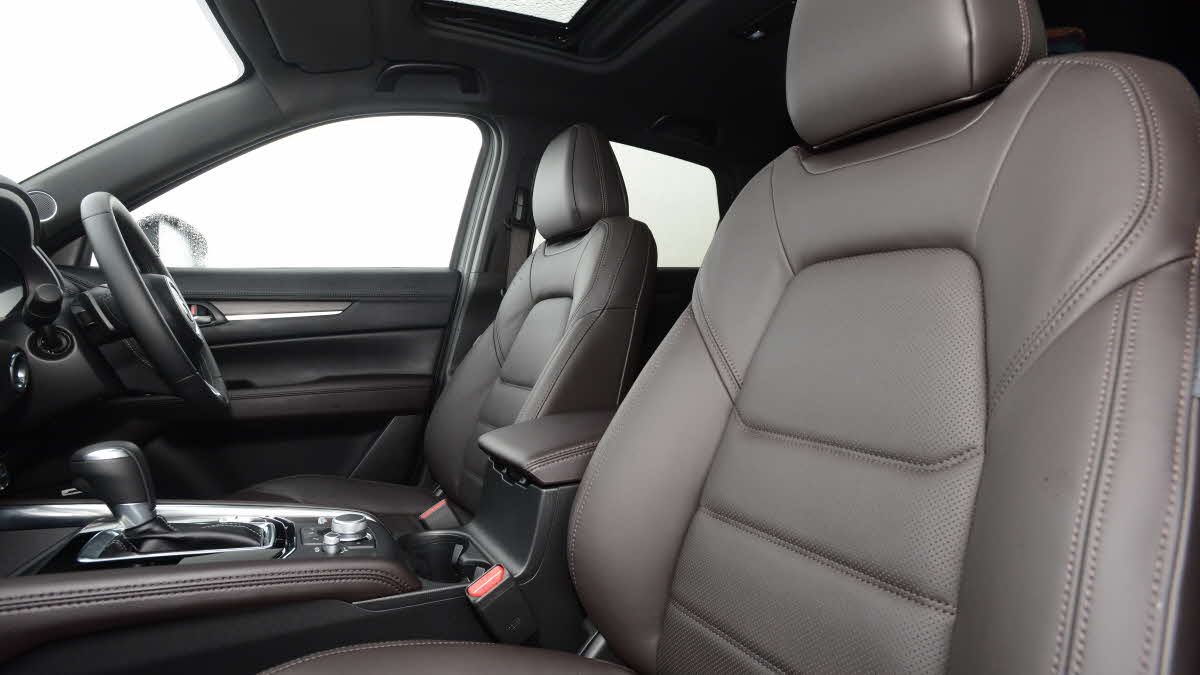 The makeover for 2022 is essentially a mid-life update, and as makeovers go it’s certainly one of the more subtle. There is a pair of new bumpers, as well as BMW-esque LED daytime running lights, and the wide, open-mouth grille has also been tweaked. The CX-5 was always one of the better-looking SUVs on sale and the re-style has improved things, but you’d have to park the new car alongside the outgoing one to really see the difference.

What you will notice, though, is the revised trim structure. SE-L kicks things off and it’s well equipped, especially with sat-nav, LED headlights, cruise control, blind spot monitoring and Apple CarPlay and Android Auto thrown in as standard. The new-for-2022 Newground model has a more ‘off-road’ look (although there’s no extra off-road ability as it’s front- wheel-drive-only) with lower bumper and side-sill trims, as well as a waterproof boot mat. The lime-green air vent surrounds and seat stitching take some getting used to, though.

Meanwhile, Sport adds a powered tailgate and parking sensors front and rear, while the new Sport Black model gets black alloys and black leather upholstery with red stitching. At the top of the range is the new GT Sport tested here, with its smart body-coloured exterior trim, 19in alloy wheels, a Bose stereo system, head-up display and Nappa leather seats. This car certainly felt pretty luxurious with those soft brown seats (heated and cooled), but no matter which model you go for, the CX-5 has a quality feel. While the design of the dashboard is a little on the staid side, the controls are well laid-out, the switchgear is tactile and it’s easy to get comfortable thanks to plenty of wheel and seat adjustment.

My only irritation was with the infotainment system. While I applaud Mazda for forcing drivers to operate the infotainment screen with the rotary dial on the centre console on the basis of safety, using Apple CarPlay and Android Auto becomes a tricky and tedious affair without a touchscreen.

The CX-5’s quality and plush-feeling plastics continue into the rear (not always a given), where there are good levels of passenger space, and the boot is of a generous size at 506-1,620 litres. In both areas, rivals such as the Honda CR-V and Skoda Kodiaq offer more room, but the CX-5 does have handy 40/20/40 split fold rear seats; once the seats are folded there are no annoying steps or intrusions, making it easy to slide items forwards to maximise space. There’s also some underfloor storage to hide valuables, but Sport, Sport Black and GT Sport lose some room due to the subwoofer for the Bose system. 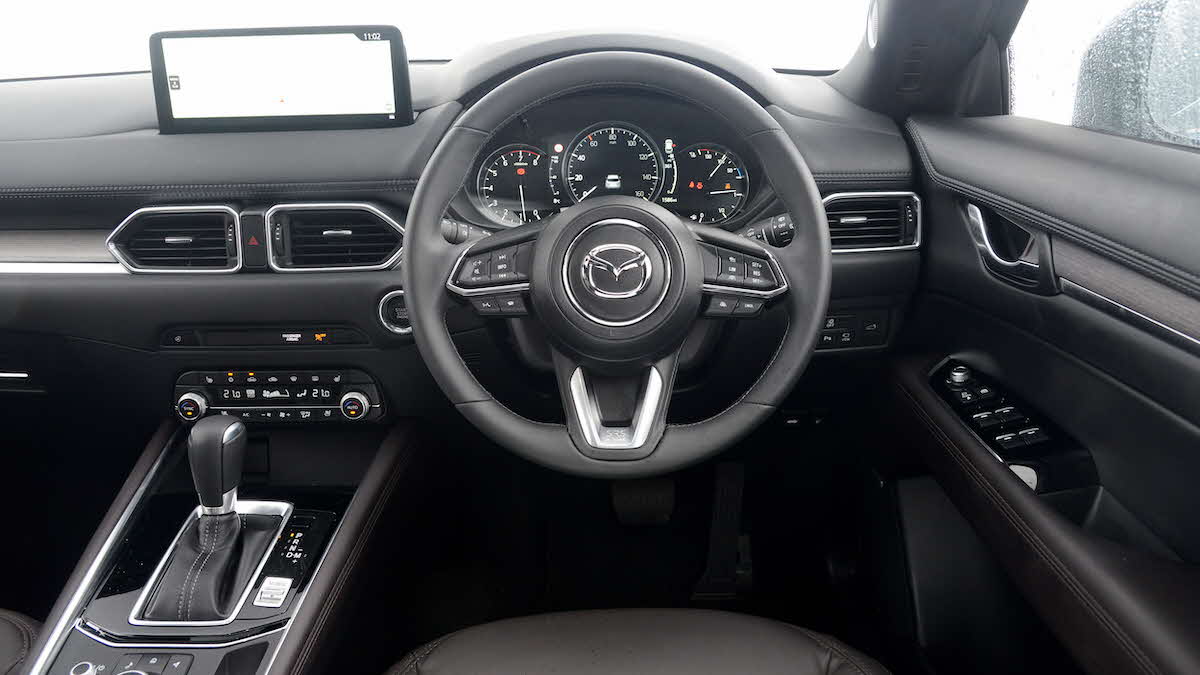 There are no hybrids or turbo-boosted small capacity petrol engines like in rivals. Instead, there’s a selection of large, naturally-aspirated petrols and diesels, as well as manual and automatic gearboxes and the choice of front and all-wheel drive. The CX-5 entered in the Caravan and Motorhome Club Towcar of the Year Awards 2022 was the front-wheel drive, 182bhp 2.2-litre diesel. Our judging panel concluded that model was a great solo car but when hitched was a little bereft of power. For this test, we took the most powerful CX-5 available to see if it would fare any better.

Power is sourced from a 2.5-litre, four-cylinder petrol engine, which comes exclusively with four-wheel drive and a six-speed automatic gearbox. With 191bhp and 258Nm of torque it’s a powerful enough unit, but those used to smaller capacity turbocharged engines in rival SUVs will be surprised by the Mazda’s slightly more sluggish response and need to be revved hard. The six-speed auto doesn’t help here and tends to hang onto gears a tad longer than is sometimes necessary, while at higher rpm the engine is a little gruff.

For 2022 the gearbox has three settings – Normal, Sport and Offroad. The all-drive system is rather clever as it uses 27 sensors that constantly monitor road conditions and driver behaviour to deliver optimum grip. Even things like outside temperature and windscreen wiper activation have an influence on how power is split between the front and rear wheels. In our testing – on some flooded Welsh roads – the all-wheel drive system gave plenty of confidence and traction, and this was especially true on damp roads while towing.

The CX-5’s trump card and reason for it legitimately laying claim to being an ‘SUV’ is the way it drives. While the automatic gearbox here is okay, manual cars at other trim levels are a delight to drive with snappy, precise changes. The steering is unlike any other mid-size SUV in that it delivers excellent weighting, feel and accuracy, while, the slightly stiff ride gives tight, rigid body control. nThe CX-5 goes down the road with a quality and sporty feel normally found on SUVs wearing a premium badge. 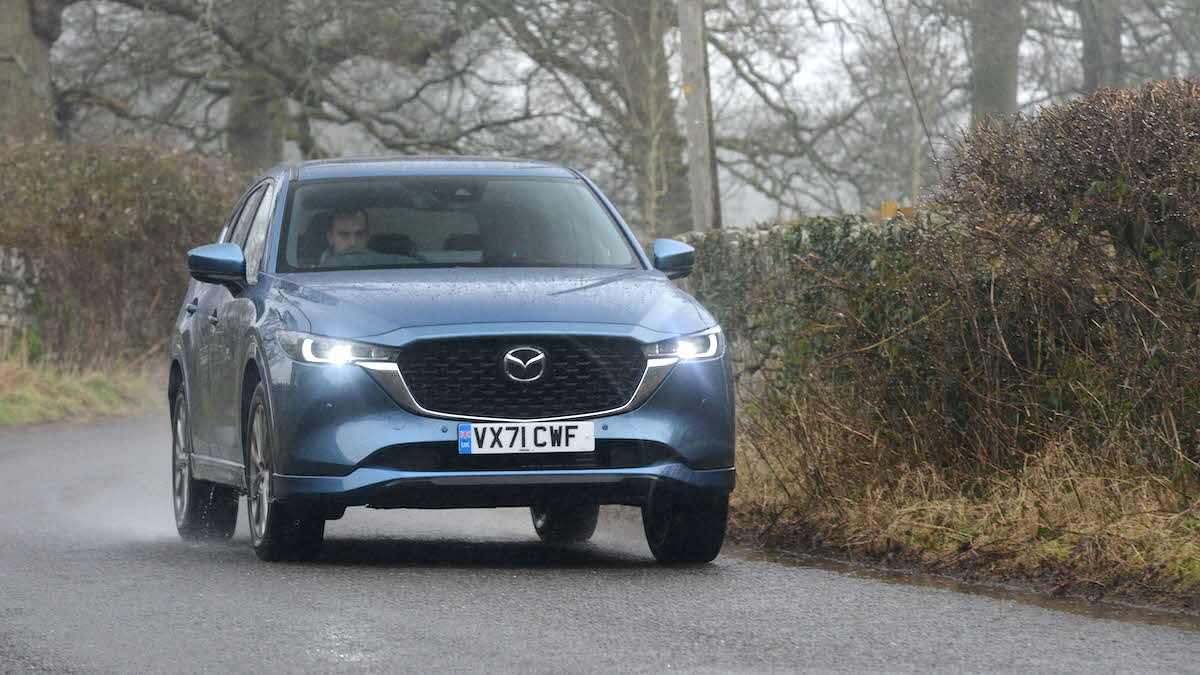 Apart from a wheel-slip on a steep, damp road – an admittedly challenging scenario for any car – the CX-5 towed with aplomb. Hitched up to a Bailey Unicorn Vigo Series 4, the CX-5 felt relaxed and assured on a mixture of roads, backed up by strong brakes, and that direct steering only added to the feeling of confidence. When hitched the gearbox settled down too and swapped gears smoothly, while the engine felt it had enough power. On a mixed route we achieved 19.2mpg, which for a high capacity petrol engine is about average (while unhitched that figure jumped to just over 30mpg). The only downside is the surprisingly low noseweight limit of 84kg, which looks small compared to cars such as the Honda CR-V and Kia Sportage with their 100kg ratings.

Few mid-size SUVs are as sporty and involving as the CX-5. More than that, it’s comfortable, feels well-built and is very well equipped.

(figures correct when tested in May 2022)