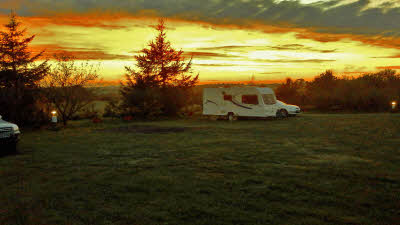 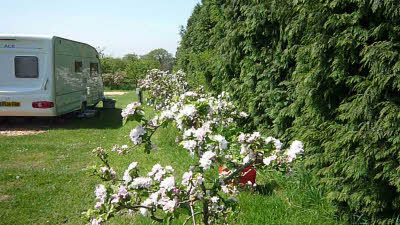 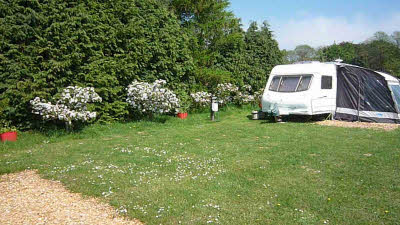 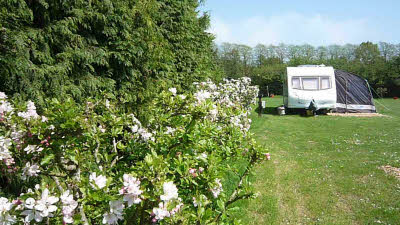 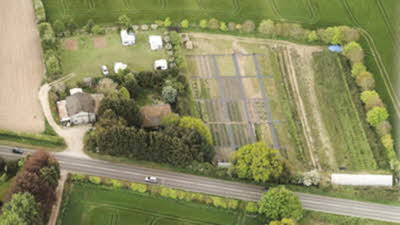 Our CL is an adults only site owned and run by Nick and Sherry Amis who have lived in this beautiful part of North Norfolk since 1965. The site is open from a week prior to Easter until 31st October every year. Dogs are welcome.

The site is flat and all pitches are on wood chip hardstanding which are large enough for a caravan and awning with 16amp electric hook up, a water tap, security light and free Wifi. The toilet and shower block has a hot shower which is included in the price per night.

Next to the CL is a field where organic flowers are grown and the rest of the surrounding land is farmed. There are fabulous views to the south and on a clear day the top of Norwich Cathedral is visible with binoculars (25 miles away). We are equidistant from the seaside towns of Cromer and Sheringham (3 miles approx) which both hold their famous annual carnivals in August. The 1940`s weekend is also extremely popular at Sheringham and takes place in September. This is where the steam trains are stationed. The nearest beach is at West Runton which is 1.5 miles away.

There is a petrol station with shop selling many provisions and newspapers and The Roman Camp Inn which serves excellent meals and good beers is within a short walking distance via a pavement.

There is a train station and bus stop at West Runton which you can meander through beautiful woodland to reach, just over a mile away. From West Runton you can pick up the coastal hopper bus which travels through several seaside villages to Hunstanton and the train to Cromer, Sheringham and Norwich.

The site is surrounded with apple, plum and sloe trees (help yourself!) and many colourful pots of varying flowers depending on the season. There are a variety of birds including partridges and pheasants which saunter round the site. Later in the year you may be lucky enough to see and hear hundreds of migrating geese in their V formations.

There are many walks close to the property and National Trust woodlands at Felbrigg Hall, Roman Camp and Pretty Corner with cycle tracks to many surrounding villages.

This magnificent stately home is surrounded by stunning scenery of rolling parkland, a national nature reserve and a bea...

With distinctive buses, a fascinating recorded commentary and friendly staff, sightseeing has never been so much fun! Ho...

Grove Farm
What a perfect location Grove Farm is, with easy access to the main Cromer - Holt road. Nick's welcome & offers of help were very much appreciated, as was the perfectly clean shower/loo. Great wood chip hard standing. Lovely views, only possible downside would be the road noise, but you soon get used to it! Stayed 4 days, wished we had booked for longer.

Grove Farm
Spent five nights here July/August in our caravan. The site is on a farm on a long A-road, so a keen eye needs to be kept so as not to overshoot. Once found, a short drive past the owners' house leads straight to the large CL site where the hut containing shower and loo is plainly visible. Proximity to the road means there is some road noise, but trees and foliage mean this was never too intrusive for us. The owners are very hospitable and obviously take pride in their site. It's obvious that several campers are regulars. All the pitches are level and bark-covered, while the grass field is well-kept and well-drained. Once the fees were settled and a quick tour was given (with a reminder to use eco-friendly loo fluids), we were left to choose our pitch and settle in. While the site is delineated by trees and bushes, from our pitch the countryside was also visible - a great view to wake up to. For a CL the facilities are good. The toilet building is clean and tiled throughout, each pitch appeared to have its own water tap very close by, along with EHU. SInce we were asked to empty grey water into the hedgerow and trees, we and others ran our hoses into the shrubs. I was struck that, were the taps (push to operate then keep pushing to fill aquaroll) were changed to standard, it would have created a serviced pitch. The site is well placed for tourism, in easy reach of Cromer, Sheringham, Norwich and the Broads beyond. Of our three hikes, I was able to route two excellent walks from the site without needing to drive, which was brilliant (though a short stretch of the busy main road needs to be negotiated). In conclusion, this is a fine site with lovely hosts, and we would happily return.

Grove Farm
Stayed for the week 9th to 15th June 2019. The week was a washout with heavy rain but this beautiful little site did not suffer with surface water mud or puddles. It is perfectly situated for the Coastal towns of North Norfolk. Very easy to find using SATNAV and the little white post outside was easy to spot from a distance. The site is very tidy and well kept pitches on new wood chip . The only downside to this site is the lack of a safe dog walk from site. The A148 changes from 40 to 50 miles an hour outside the gate and it is a hazardous experience crossing it with dogs especially in the morning and evening rush hours. There is a residential road just across the way but this is also a rat run for traffic and not ideal dog walking. Our only remedy was to drive 1/4 miles to the National trust forest where dog walking is perfect in a large wood.

Grove Farm
Site was perfect for our visit - central to every where we were planning to visit. Quite a luxury to have water, electric and a security light adjacent to each pitch! One of the nicest small CL's we have stayed on! If we are in the area again, it is a site we would definitely try to book. Cromer was a disappointment - not the place as such, as we did not actually get to see it, due to the cashless car parking machines! so we went to Sheringham, which accepted cash in the machines! and was a charming place, full of small independent shops.

Grove Farm
From the super welcome to the excellent facilities, this site is almost too good to be true. It is the sort of site you don't want to recommend so that you can get a pitch yourself ! Can't wait to go back next year. 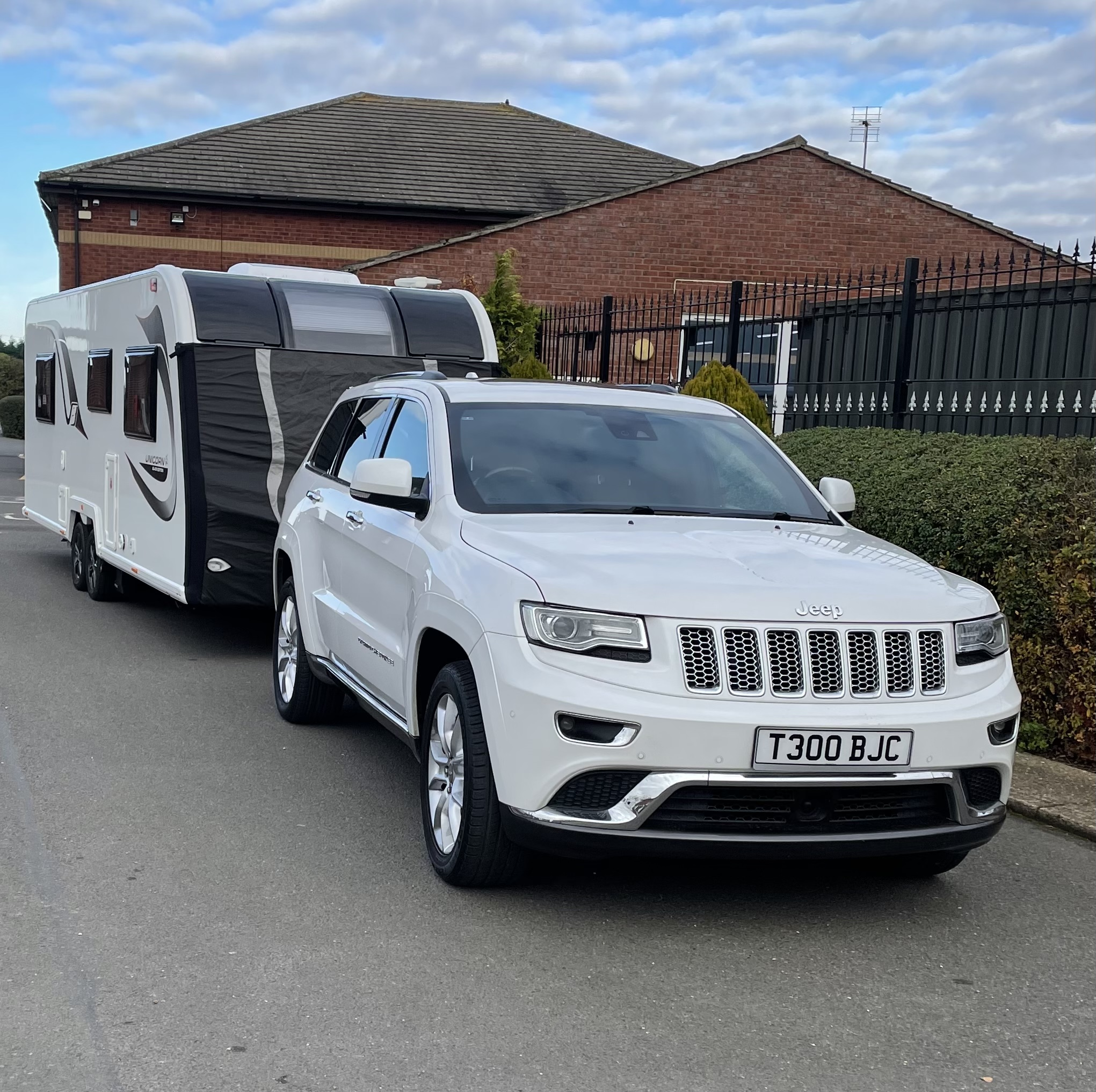 What a perfect location Grove Farm is, with easy access to the main Cromer - Holt road. Nick's welcome & offers of help were very much appreciated, as was the ...

Spent five nights here July/August in our caravan. The site is on a farm on a long A-road, so a keen eye needs to be kept so as not to overshoot. Once found, ... 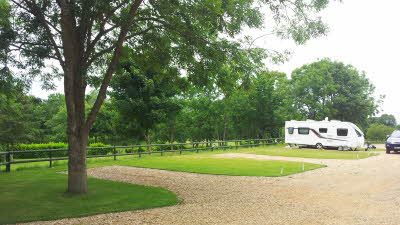