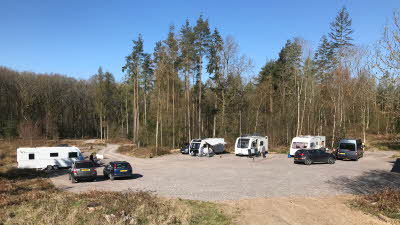 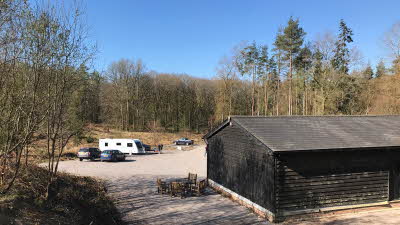 Bluebell Wood is an ideal location for peace and tranquillity. If you like space, trees and a retreat to the natural world this is the site for you. It has easy access turning off the B3089 just 3 miles from the A303. Bluebell Wood represents a prefect stop off en route to the West Country. Dogs are welcome, and we will take group bookings. Although licensed for just 5 pitches there is a selection of 7 gravel pitches all a minimum of 10m x 10m to choose from. Three of the pitches are together on a vast gravel turning area of nearly 50m x 50m. So you can be as together or as apart as you like. There is no electricity but there is a WC (cold water to basin only) together of course with the required grey water and chemical disposal facilities. Security gate details will be provided before arrival.

The site is set in 50 acres of woodland for exclusive use by you. There are no rights of way within the wood so it's all yours. A public footpath on the Northern boundary leads to a network of other footpaths and the rolling parkland of National Trust owned Dinton Park and the 1820 neo Grecian designed Philipps House (parkland open daily, free) and Teffont village through which runs the River Teff, a pretty stream leading past ancient stone cottages and the impressive Howards House Hotel and restaurant (formerly the Dower House of the Mayne family who have owned the village for several centuries).

The picturesque village of Tisbury (5 miles) has been named one of the best places to live in the UK by The Sunday Times, has a pretty high street and a range of independent shops (Deli, Downers Farm Meats, fab Fishmongers, the noted Beckford Bottle Shop, and nationals such as the Co-op and Boots). Tisbury Motors sell fuel and The Boot Inn with garden has a good range of local beer. The famous Messums Gallery housed in the largest and one of the oldest Thatched Tithe barns in the country can be seen from the road as you enter Tisbury from Teffont. Also nearby there is Pythouse Garden Restaurant set in the walled garden of Pythouse Estate and Ansty Farm shop on the A30 and a number of foodie pubs, The Compasses at Chicksgrove (signposted off the road from Bluebell Wood to Tisbury, so your closest eatery after Howards House, and The Beckford Inn. Tisbury has a mainline station (Exeter to London service hourly). Nearest shops are the one stop Budgens and petrol station at Barford St. Martin five minutes by car down the road towards Salisbury or in Tisbury.

The site has easy access to the wider attractions of the medieval city of Salisbury and its Cathedral, Stonehenge, Wilton House, Shaftesbury's Cold Hill (all less than 30 minutes) and further afield to Longleat House and Safari Park and beautiful Georgian Bath (45 minutes).

A remarkable adrenaline-filled experience awaits you as you take part in the awe-inspiring, bucket-list, daredevil activ...

Camping in the forest

Bluebell Wood
Loved our stay here had such a peaceful relaxed weekend. Hard standing pitches where you can park where you like surround by your own forest (we did see deer in the forest) Very secure site as it is locked once you go in with a padlock. The only facilities on site is a toilet in the large barn which also has a large wooden table & chairs in another room perfect if the weather turns nasty, lovely idea. It is such a peaceful site but as others have mentioned there is slight road noise but this did not affect us at all. Beautiful walks through the forest to the NT grounds and then on to the local pub in the village which is well worth a visit. It was amazing to open up the doors in the morning and be so close to nature. Will definitely be returning to this site.

Bluebell Wood
The title says it all. If you're a caravaner and can't survive without electric hookup why come to this site and feel the need to run a very noisy generator ruining the potential peace and quiet of this site. Very selfish behaviour. If you need a generator then buy decent one that is a lot quieter or don't run one at all.

Bluebell Wood
It was tempting not review this as I wanted to keep it a secret! However, once through the gate you are in a different world. So lovely & peaceful despite road noise during the day. It is a simple but clever idea to have an indoor sitting area in the barn for inclement weather & those chilly evening get togethers. Individual large hard standings give a feeling of privacy. I will definitely be back in other seasons. The Caravan & Motorhome Club sign could do with moving closer to the road, as both myself & my sister missed the turning first time. It would also help if it said Bluebell Wood.

Bluebell Wood
We recently stayed at this lovely site. To wake up in the morning and open the caravan door and be greeted by a deer was lovely . The room and pitch sizes were big. Another added bonus was the barn, where if there was a group of you, you all could get together comfortably, where there is tables and chairs provided which was another tick in the box for this site for me . There is also a toilet in the other section of the barn. Nice to be camped in the centre of a wood . We had some nice walks and would definitely come back again. Thank you very much Bluebell Wood.

Bluebell Wood
A minimalist site, perfect for our stay of one night. Easy to find and access. The pitches are large, flat and well spaced, set in lovely natural woodland surroundings. You are free to walk the woods, which are blanketed in bluebells in May. The deer are curious and watch you from only a slight distance. Some distant traffic noise in the day but pin drop quiet at night. The site owner was very responsive and a breeze to deal with.

Camping in the forest

Loved our stay here had such a peaceful relaxed weekend. Hard standing pitches where you can park where you like surround by your own forest (we did see deer ...

The title says it all. If you're a caravaner and can't survive without electric hookup why come to this site and feel the need to run a very noisy generator ... 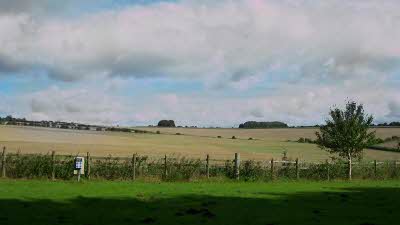 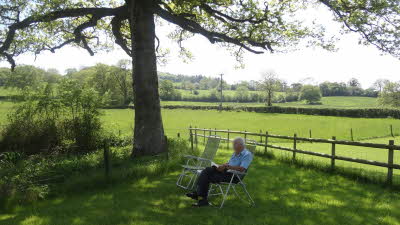