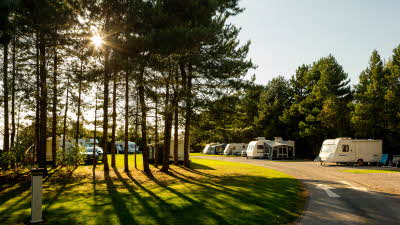 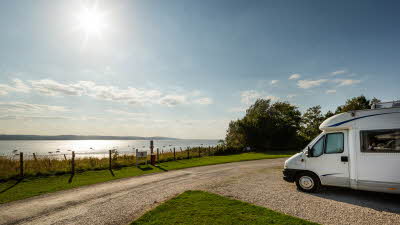 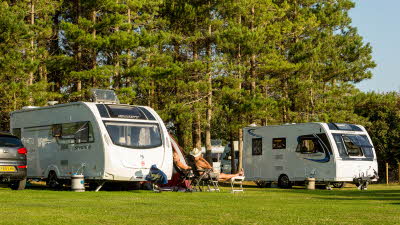 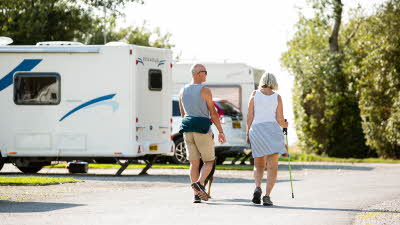 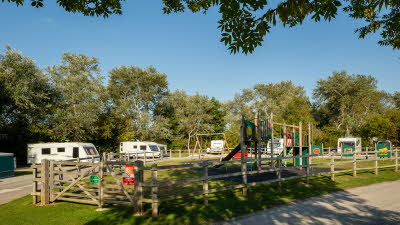 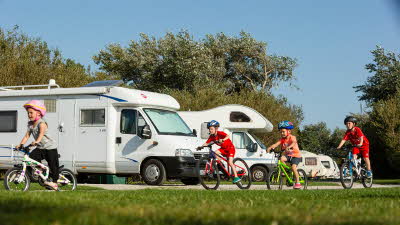 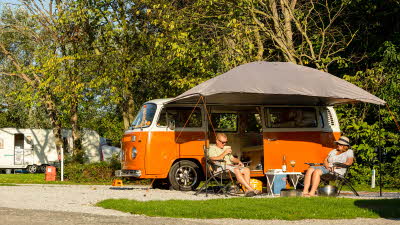 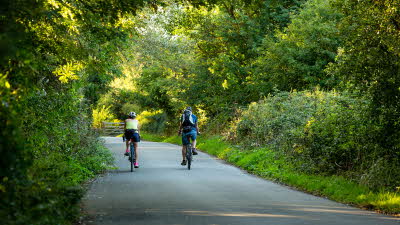 Wirral is a peninsula of great natural beauty, and the Wirral Country Park Club Campsite is set right in the midst of some of its loveliest landscapes with wonderful sea views. Located in a country park of 2,000 acres of unspoilt nature, the caravan park is made up of several pitching areas attractively separated by trees and shrubs. Some pitches overlook the Dee Estuary, which is one of many ideal places for scenic walks. There are lots of lovely wooded areas on site and plenty of bird life to observe.

Wirral Country Park Club Campsite puts you within easy reach of a wealth of fun activities to suit all tastes, whether for sports enthusiasts, young families or those with ultra-relaxed pursuits in mind. You will find the caravan park just perfect for sailing - no less than seven private Sailing Clubs offer temporary and family membership to visitors. Apart from a huge choice of unforgettably scenic walks, the area offers power-boating, water skiing and other water-based sports to enjoy along with several indoor swimming pools, sports and recreation centres and golf courses. One of our Merseyside touring sites, you’ll be conveniently located to visit Liverpool and explore north Wales.

A mobile fish and chip van visits this site, please ask the site staff for details.

The site is situated on a circular route around Wirral. Bike hire is available in the country park. The nearest National Cycle Network route to this site is Chester to Liverpool, Route 56, OS ref SJ283856.

Enjoy a walk locally in Wirral Country Park, or to the beach 5 minutes walk away. There's also the 12 mile long Wirral Way, a combined walking and cycle route with separate horse riding route.

Check out the huge range of free pre-mapped walks and hikes near our campsites at Outdooractive's website. You can download the free Outdooractive app and member's can save €10 on an Outdooractive Pro or Pro+ annual subscription.

Under the Edge Hill area of Liverpool you will find a mysterious 19th century network of tunnels created by an eccentric... 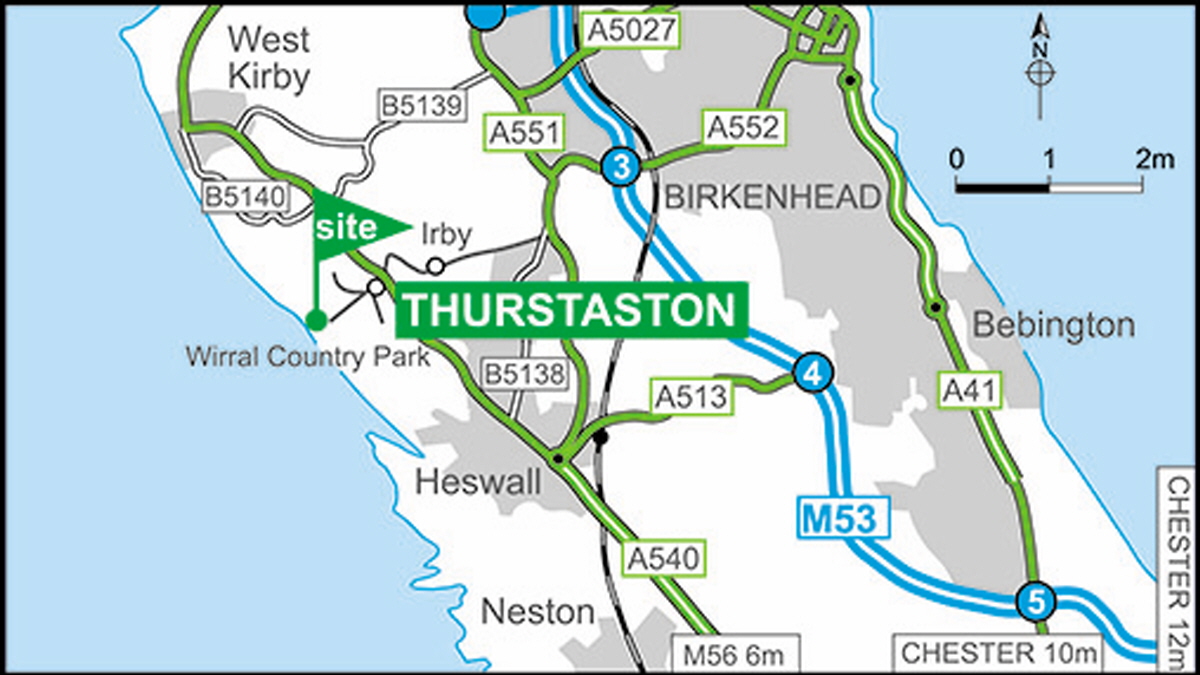 Leave M53 at junc 3 onto A552 Heswall towards Arrowe Park Hospital. Keep left passed Asda, then turn left (sp Heswall) at the traffic lights. At the roundabout turn right, then take the first right Irby. At the T junction opposite the Anchor Pub  turn right, then at rndabt continue straight over (second exit). Turn right at the T junction, continue past Wirral Country Park, the go over the bridge and turn right past static caravans. Site is on the left (beware speed bumps).

Wirral Country Park Club Campsite
1st visit to this site and overall we loved it! Queued to get in but we tried our best to arrive as closely to 1pm as possible. Sadly it was a bit chaotic on entering site initially and mainly due to the site having no waiting area's and the only road around the site wasn't much wider than a single carriageway. Ok if there's a good one-way system in place but not so good if you meet another unit coming the other way. We felt a little rushed to get on a pitch for fear of holding other people up. I think the layout, a mix of avenues and cul de sacs was good but some pitches proximity to the road was very close. Lose one or two pitches to create a better, wider, more aesthetically pleasing and user friendly roadway and maybe even install a pedestrian route from the barrier at reception to the toilet block corner. Pitch sizes were generous and well maintained with no weeds. Views around the site were spectacular. Plenty of walks from site and easy route onto beach from the sailing club 5 minutes walk from site entrance. Facilities block was clean but dated. Fish and chips Tuesday night were grand. We saw lots of wildlife on and off site. Planes taking off or coming into Liverpool airport were very visible above the site. We will visit again but will aim to arrive midweek probably to avoid weekend pitching chaos. The wardens were exemplary. They had a late evening walk around and were very approachable at all times.

Local to me but could be anywhere

Wirral Country Park Club Campsite
Local to me but love to visit even though I pass the site most days when walking my dogs. Stayed from the 19th to 22nd and took grass pitch 23, couldn’t have been more happier with this as its well protected from the wind and still get a good amount of sun. I have never been on a site, ever, that was this quite particularly over a week end, you could hear a pin drop, not sure why but it’s was mainly couples. The wardens were super friendly and ware doing a great job in keeping the site to a standard we all expect, well done guys you are an asset to the club. Looking forward to my next stay. For those that have never been, this site is a must and the Wirral will welcome you with open arms. Perfect for cycling and walking with the Wirral way at the site entrance, West Kirby and New Brighton just down the road. Chester and Liverpool with its free museums and waterfront a short drive away. Happing caravaning.

Wirral Country Park Club Campsite
Our first time at this site. Lovely well maintained and spacious. A friendly greeting from the assistant on arrival with clear guidance. Well worth a visit to the sailing club, left out of the site. The Wirral Country Park has lovely walks and.views. The club house on the static caravan park just up the road, open to everyone, however currently open Friday, Saturday and Sunday. A definite site to visit again, but longer next time.

Wirral Country Park Club Campsite
Never visited this site. So glad we have. Lovely location, lovely views, lovely walks. Fish and chip van on Tuesday very popular and very nice. Will return soon. Wardens very pleasant. We tend to visit not at weekends which I am sure will be so much busier.

All about location, but fell a tad short for me

Most reviews of this site are glowing in their praise, and I agree that the site has some very positive features, the main one being its location, but my overall feeling was one of disappointment. I have been to much better sites. With a reputation for some first-rate views, a setting close to water and beaches, some nice country walks and all in a very well-to-do area, it is perhaps inevitable that it would rank highly. But there are downsides.

I never expected to get a pitch with a view; I imagine you have to be in the “ignore earliest arrival time” camp to have a fighting chance of that; but I had assumed there were more pitches with a view than there are. They number less than 10% of total pitches. In any event, those few pitches with a view were exposed to very strong winds so they were not all good.

The lack of a view was not my gripe. Instead, I felt the site was cramped; it bore a claustrophobic, over-subscribed quality. It was pretty full, which tends to heighten any sense of confinement, but my own theory was that it was all about the layout; there were several dead ends and, whilst specific pitch separation is no doubt normal, I gained the impression that roads had been designed to get the maximum use of the space. I never pitch on grass unless there is no option, but I did observe some extraordinary pitches on grass; in one case a large caravan shoehorned between a service point and a copse of fir trees (26) and another, a motorhome, perched precariously on a narrow section of grass between the arc of a corner in the road and the trees behind it (41). Presumably they were content there, but I would have hated it.

Another thing, perhaps less important, but which nevertheless struck me as a negative, was that there is only one chemical waste disposal point which is in the facility block. I cannot recall having to walk so far to empty the loo. I must have done, but, if I had, it was a very long time ago.

I knew the site was relatively isolated, so I was ready for this and that is why I booked three nights only. As a motorhomer, I like public transport to reach farther afield; but there is none close at hand here. I did cycle and walk. Cycling is effortless if you stick to the disused railway running between Heswall and West Kirby because, naturally, it is flat. Accessing these towns (where there is public transport) was easy. Some of the walks are very lovely and the beaches, once accessed, are pleasant, if hardly idyllic, but there is no access close to the site (depending on how you define close I suppose).

The site managers I had contact with were really lovely and helped me out of a problem with my planned next site visit which I sadly and annoyingly had to cancel.

I cannot honestly say I would return here, except possibly out of season, but I am glad I came if only to find out for myself what all the fuss was about.

1st visit to this site and overall we loved it! Queued to get in but we tried our best to arrive as closely to 1pm as possible. Sadly it was a bit chaotic on ...

Local to me but could be anywhere

Local to me but love to visit even though I pass the site most days when walking my dogs. Stayed from the 19th to 22nd and took grass pitch 23, couldn’t have ...

Ahead of your arrival onsite, please check our Before you travel webpage (camc.com/beforeyoutravel) for key information about roadworks or diversions and any site works that may be underway.

With our campsites busier than ever right now, we'd really appreciate your support with a few things to help everyone have a safe and enjoyable stay. Please be mindful of site arrival times (as they do vary), keep children and pets close by and within sight, and ensure you keep your speed below 5mph. Thank you!

Book this site a year ahead

Towards the beginning of each month, we will put pitches on sale for the same month next year.

Search and book UK Club sites a year in advance! 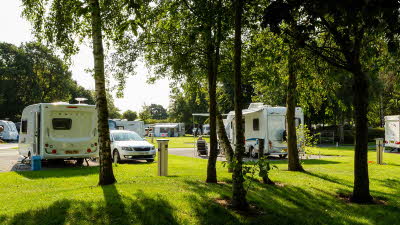 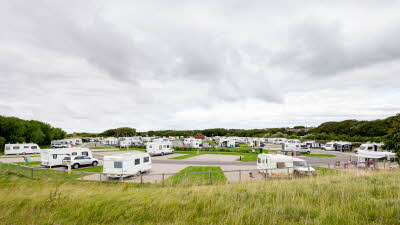 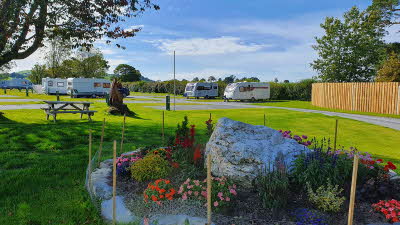 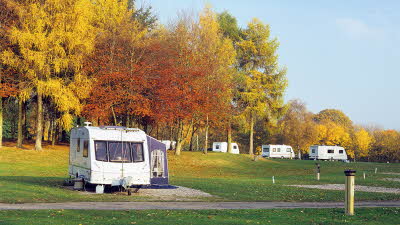