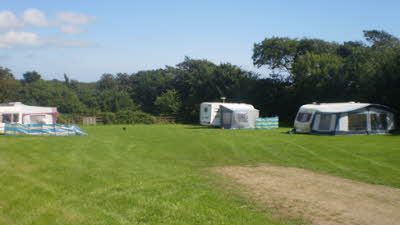 The site is in the old orchard on this family run dairy farm, partly surrounded by trees it is quiet and peaceful and you may be lucky enough to see Owls at dusk and hear them calling.

Locally at Rosudgeon there is a grocery store which also has a petrol station, post office, off licence and newspapers. The Falmouth Packet Inn, serves food and there is a Fish and Chip shop

There is direct access from the camp site to the inland footpath network which connects to the South West Coastal Footpath. Walk east to Prussia Cove and enjoy the views of Mounts Bay towards Porthleven and Praa Sands, (you may catch a glimpse of a Cornish Chough or a seal on the rocks)  or go west and marvel at the views of Perranuthnoe and St Michael's Mount with the villages of Mousehole and Newlyn in the distance across Mount's Bay.

Perranuthnoe has a sandy beach, two cafés and the award winning Victoria Inn. On thursday afternoons during the summer there are cream teas with homemade cakes in the church rooms, proceeds go to the beautiful old Church.

Marazion with its sandy beach and children's play area is just a short drive away. There are several cafes and public houses serving food in Marazion and there is a doctor's surgery, a chemist, bakers and gift shops. There are ferryboats to St Michael's Mount, but it is possible to walk the causeway at low tide. Longrock beach west of Marazion is dog friendly.

Penzance about five miles away has larger shops, banks and quaint old Chaple Street which leads down to the harbour where it is possible to catch a trip boat to view the Bay from the water. The seafront Promenade links Penzance to Wherry Town and Newlyn. There is an open air swimming pool near to the Promenade.

The Scillonian Ferry sails from Penzance to the Isles of Scilly daily in summer and day trips are popular. 7.68 Miles from your current location

Flambards Theme Park is a great family fun day out! Brave sky high thrill rides and enjoy the undercover soft play area. Discover dinosaurs in the Jurassic Journey and uncover fossils in the Dino Dig. Enjoy the life-size Victorian Village and experience Britain in the Blitz in the award-winning indoor attractions. 8.97 Miles from your current location

One half price adult with one adult paying full price admission.

15.27 Miles from your current location

Prepare for mud-churning and wheel-spinning action as you try and overcome the array of challenging obstacles that await you on the treacherous off-road tracks! With over 60 circuits located across the nation, Quad Nation is the UK and Ireland's largest Quad Biking provider and, with a bucket load of adrenaline-filled experience, you're guaranteed to have a quad biking adventure to remember! Other locations are available, see website for more details. 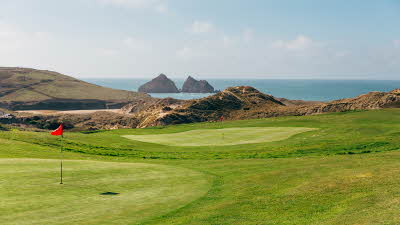 23.01 Miles from your current location

10% discount on all three courses.

Well situated for the little gems Cornwall has to offer

Chiverton Farm
A well located site for exploring the southern most part of Cornwall. Therr are plenty of nearby shops like Co-op, Sainsbury's and Tesco as well as petrol stations too. The site is generally peaceful, although, the farmer was using a bird scarer in one of the nearby fields which was going from dawn till dusk the whole week we were there. The site was easy enough to get to and to find the site, with good size roads on the lead up to it.  Disappointingly, during our stay, we experienced that a large section of the long driveway leading to the caravan field was covered with a thick layer of cow manure. This seems to be the main route for the cows, from barn to field, and cows used that route several times a day. It wasn't cleared once during our stay and when it rained it became so sludgy that even with a 4 wheel drive it became very slippery. With rain also came the very strong smell of manure within the caravan area, this wouldn't normally bother us but this became quite pungent at times. The field itself is on a bit of a slant so make sure you have some ramps and blocks. We also found the grass to be kept rather long compared to the usual CL sites we've stayed on. Wasn't much of a problem for us but I know some people prefer to stay where the grass is kept shorter. Easy access to drinking water, toilet disposal, bins and recycling on the caravan field. No grey water drain.

Chiverton Farm
We had a wonderful stay here. Pitches are spacious and so peaceful. Some lovely coastal path walks directly from the site (our favourite was the walk to marazion). There is a bus service at the entrance to the farm if you want to walk one way and bus it back. The entrance to the farm is a bit rough but nothing to be concerned about. Would definitely stay here again

Chiverton Farm
This is the 2nd year that we’ve stayed at Chiverton Farm and for us it’s the perfect site and location. Very friendly owners, spacious field with clean facilities. Access straight from camping field into open fields ideal for dog walking and gorgeous views from there over St. Michael’s Mount. Easy access to the coast path. We walked over to the Cabin Beach Cafe in Perranuthnoe and spent a couple of hours on the beautiful beach. There’s even free wifi on some parts of the site. Absolutely love this site and will go back year after year whenever we visit Cornwall

Chiverton Farm
We are just back from a long weekend at Chiverton farm. A perfect CL, quite and relaxing. The best bit has to be the 25 minute walk through woods and fields to reach the coast path. Then you have a choice to walk east or west along one of the best parts of the coast path. The highlight was a walk to Perranuthnoe and lunch at The Cabin. Yes the farm lane can get a bit muddy, but to be expected on a real farm. Hope to return soon.

Chiverton Farm
Fabulously located site. Turn left along the coastal path to Prussia Cove or right to Saint Michaels Mount. Loads of little hidden beaches. Beautiful scenery. We had fish and chips opposite Saint Michaels Mount in Marazion while the tide came in. We will definitely visit again.

Well situated for the little gems Cornwall has to offer

A well located site for exploring the southern most part of Cornwall. Therr are plenty of nearby shops like Co-op, Sainsbury's and Tesco as well as petrol ...

We had a wonderful stay here. Pitches are spacious and so peaceful. Some lovely coastal path walks directly from the site (our favourite was the walk to ...