With great deals to be had, Rob McCabe delves into the second-hand market to examine three pre-loved tourers.

The gradual easing of Covid restrictions may have suggested a route back to some kind of normality – but, at the time of writing, ‘normality’ is the very last word you’d use to describe the market for new and used caravans.

Manufacturers still cannot produce enough new models to meet the demand, so buyers are still turning to the used forecourts in their droves; and when they get there, they’ll find that prices are higher than they have ever been.

That said, buyers can find a caravan they like if they’re quick off the mark, and could be taking it on holiday a few days later; a privilege they’re clearly prepared to pay for. And there’s much to like about this issue’s three featured vehicles, on display at a Norfolk dealer whose staff were busy handing over caravans to their eager new owners on the day I visited. 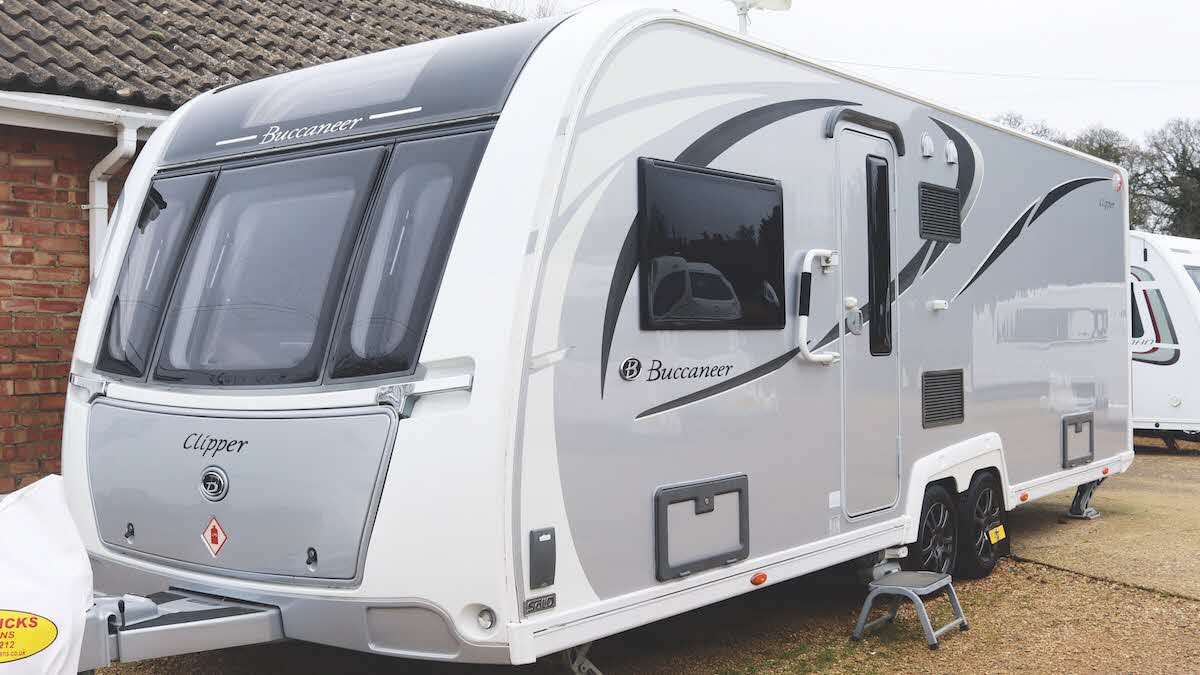 Twenty-five grand? I know – sounds a lot. But that’s a chunky £7,000 less than it would have cost new in 2017 and, in the context of the current state of the market, it’s actually very fairly priced. Anyone looking to spend this sort of money on a new caravan today wouldn’t get the luxury or the sheer amount of floorspace on offer in this opulent, fixed-single-bed, twin-axle.

Nowhere is this eight-foot-wide caravan’s huge amount of living space more evident than in the bedroom, especially when the transverse single beds are pushed back into day mode to transform this area into a dressing room par excellence. Note that the bed nearer the back extends to 6ft 2in, while the other tops out at 5ft 11in. 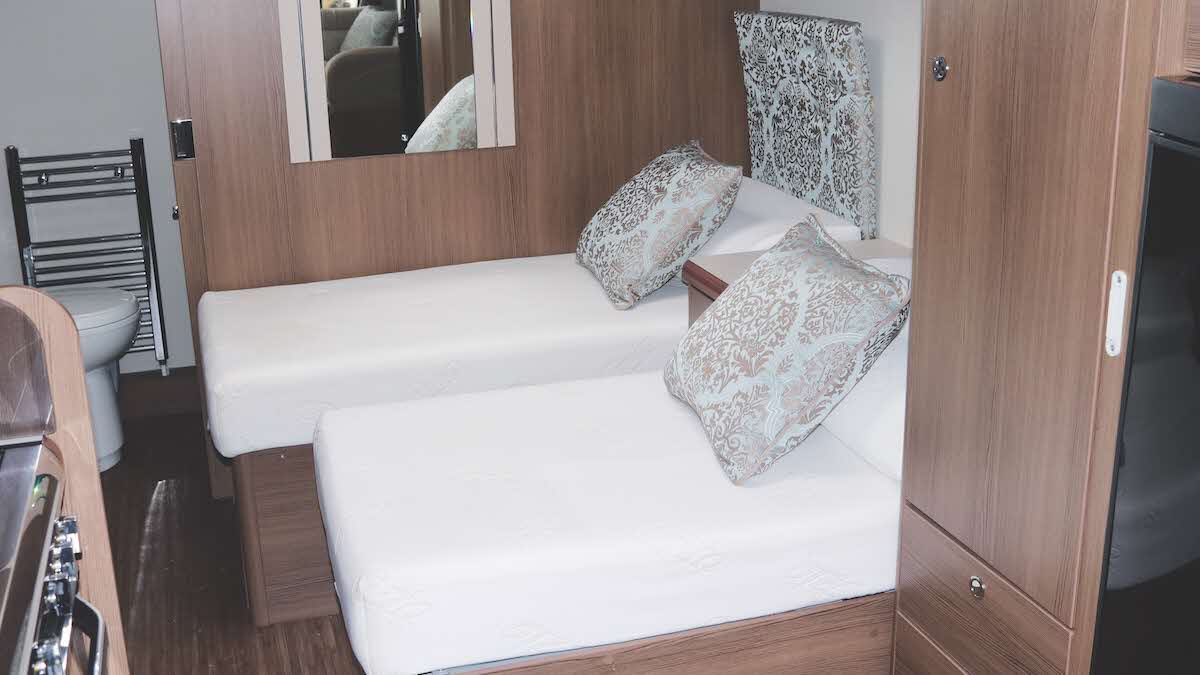 Right at the back is the full-width washroom, which impresses with its space and décor: the tile-effect wall covering in the shower cubicle is impressively realistic. Like everywhere else on board, it looks immaculate – this caravan has clearly been well looked-after. The only blemish is an unfortunate mark on the kitchen worktop, albeit it’s small enough not to be a deal breaker. Elsewhere in the kitchen, the grill, oven, hob, fridge and microwave all reveal what you want to see in any used caravan – clean, unmarked surfaces.

The lounge is suitably posh-looking, with huge, wraparound bolsters in the front corners that are great to lean back into. The upholstery still feels fresh and accommodating too.

If you own a sufficiently muscular towcar, this Buccaneer makes a very convincing case as an alternative to a new caravan – especially if you can turn on the charm and turn the six-month warranty into 12 months. 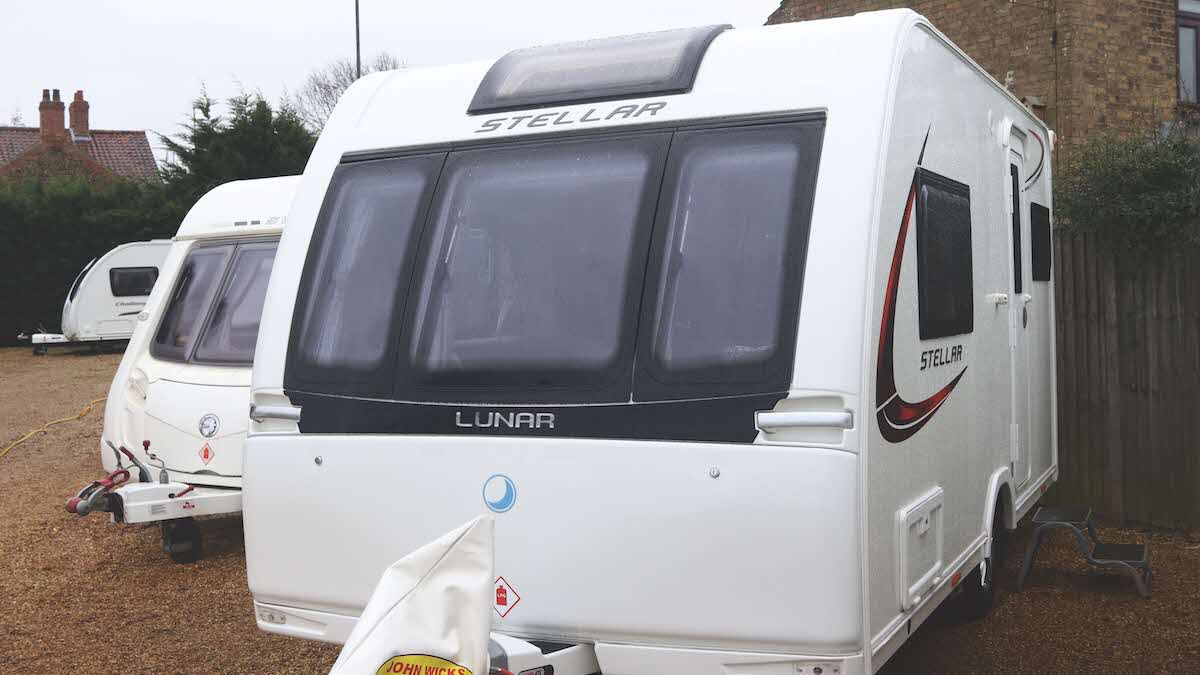 Unlike the big Buccaneer, there’s a huge pool of potential towcars for this lightweight gem (1,230kg MTPLM). And, lightweight or not, it comes with Al-Ko ATC to give the next owner an easy life on the road and a motorised mover to aid manoeuvring on site.

Lunar really got its priorities right when designing the Stellar, endowing the lounge with two capacious 6ft 5in-long sofas that are great for entertaining, and which become lovely single beds in the blink of an eye. Making up the vast double is achieved by pulling out the two-part bed base from under the sofas. You’re well looked-after, with TV viewing socketry on the nearside dresser and by the front window, pleated blinds on all the windows, Truma central heating and an exterior-access locker. 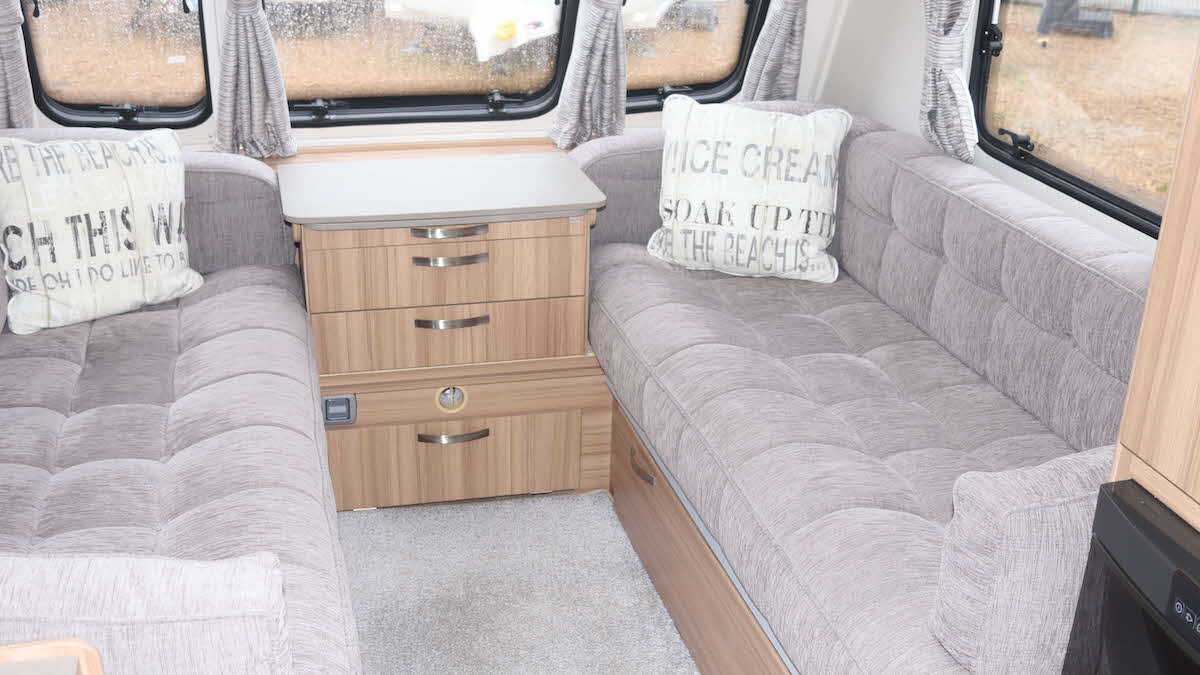 There’s still space for a separate shower cubicle in the somewhat plain offside-rear-corner washroom, with the rest of the back taken up by a very smart, L-shaped kitchen with its own colour-contrasted identity. The challenge for the next owner is to keep the appliances – which include a low-level microwave and a dual-fuel hob – as new-looking as they are now.

That asking price does raise eyebrows, but it’s just how things are right now. And you’d be lucky to find another end-kitchen two-berther as exceptional as this utterly flawless example. 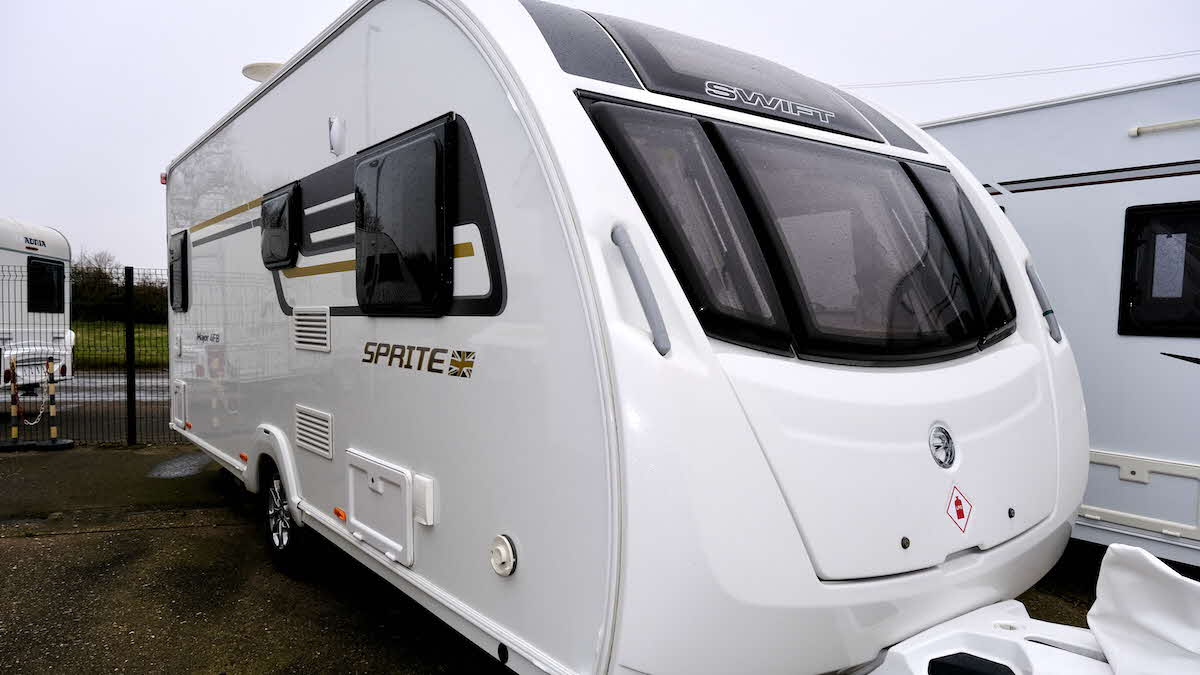 Would-be buyers holding out for an island-bed may not be interested in this ‘French bed’ offering at first glance – but they may be tempted to give it a bit more consideration after they’ve seen what a clean, presentable caravan it is (and the Duvalay mattress still feels sumptuous and supportive).

It may be six years old now, but that Sprite body shape still looks pin-sharp – and a big shout-out to whoever designed the cool, restrained exterior graphics, which would enhance any 2022 caravan. Indoors, it’s all very pleasant too, in an unfussy kind of way.

Accommodating a luxurious permanent double bed in a caravan that’s under 23ft long does mean something has to give – and in the case of this Sprite it’s the lounge, which is tiny. There is a full-width rear washroom with a roomy shower cubicle – a useful feature for those who frequent rally fields or the more basic CLs. 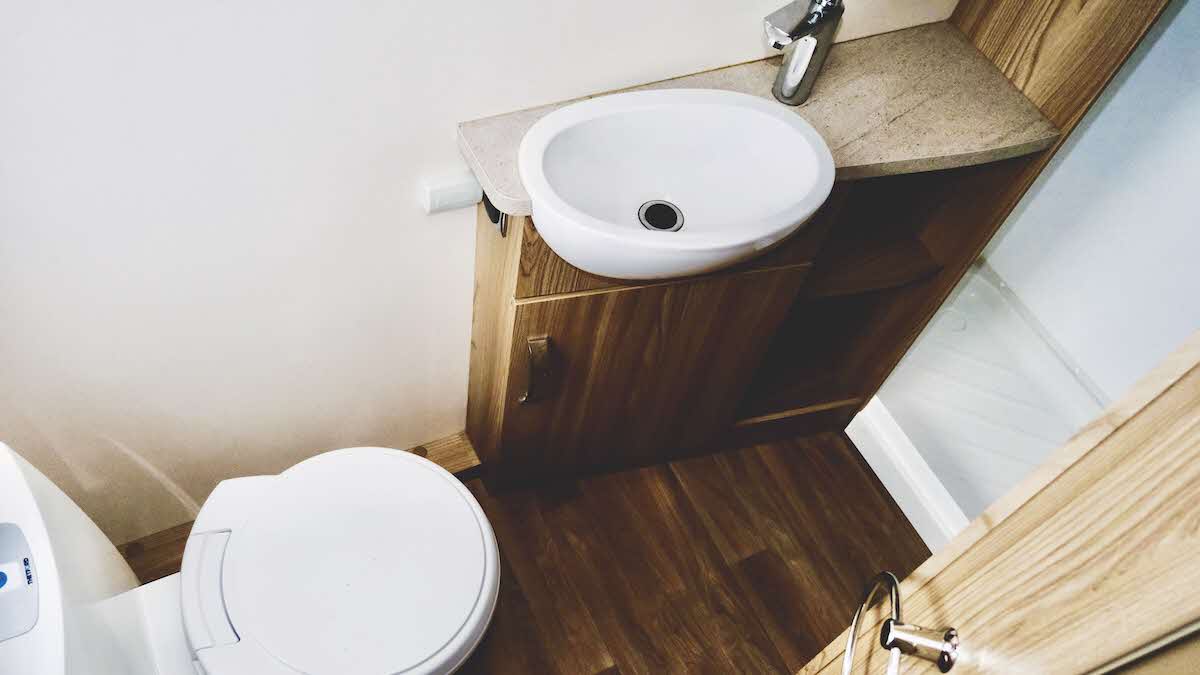 Everything on board is nice and clean, with just slight tarnishing here and there suggesting previous use. The veneer on the shelf under the nearside dresser looks a bit worn, although half an hour with some sandpaper and a tin of wood stain will sort that (or a DVD player will conceal it anyway!).

Do you want to sell your caravan, motorhome or equipment? It’s free to post an ad on the Classifieds section of our website and Club members receive a 30% discount on ‘premium ads’. To find out more and for terms and conditions see camc.com/classifieds.