With seating for nine people the Ford Torneo Custom is perfect for those who have a large family or need to transport lots of stuff. Lesley Harris asseses how it performs as a towcar.

Ford has always been at the forefront on the MPV scene. C-Max, S-Max and the Galaxy have all been firm favourites – but what if they aren’t big enough for your lifestyle needs? Those who require more space should take a closer look at the new Ford Tourneo Custom. Based on the award-winning Transit van, it’s perfect for transporting lots of kit, lots of people or both.

Despite its size the new Tourneo is a good-looking vehicle too, following a substantial facelift. At the front end the bold chrome grille and eye-shaped headlamps flow neatly into the muscular shoulder lines and give it a much more purposeful stance than its predecessor. 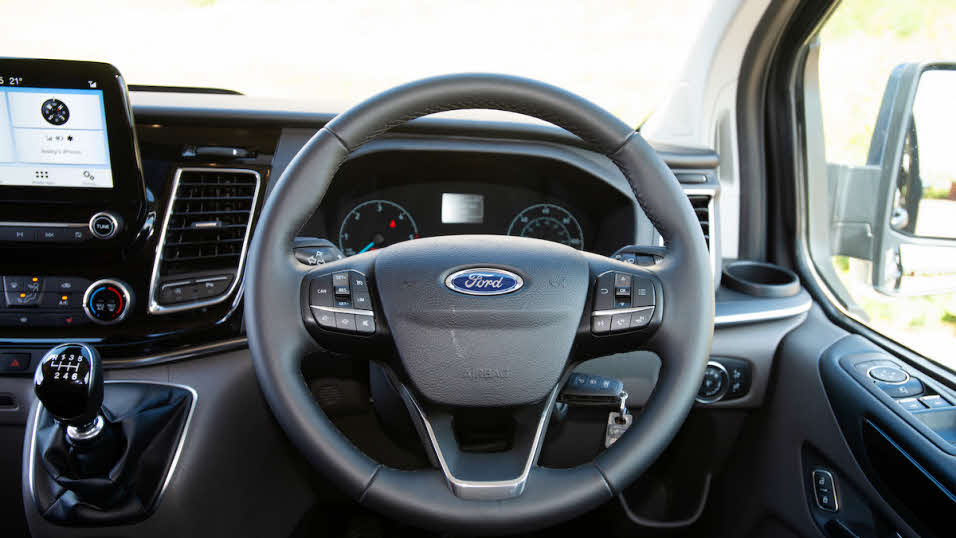 It’s a bit of a step up into the cab but once you’ve hoicked yourself into the driving seat you’ll find a perfectly pleasant environment. Ford has added lots of neat chrome detailing to the fascia, air vents and door trims for that premium feel. There’s a new instrument panel taken from the passenger car range along with the SYNC 3 communications and entertainment system which controls music, satellite navigation, hands-free phone, climate control and more, and can be accessed either via an 8in touchscreen tablet in the centre of the dashboard, the multi-function steering wheel or even through voice activation technology. Everyday practicality hasn’t been forgotten either. There are no fewer than seven cup/bottle holders in the front cabin alone and enough cubbies to stow pretty much anything you might need on even the longest of journeys.

There are acres of space in the back, which you access through dual sliding doors, and I have to say the Tourneo comes with the most comfortable rear chairs I think I’ve ever sat in. There are six individual seats – two of which have table-style backs and four offering Isofix child-seat attachments. All can be folded, tumbled or completely removed, giving you  a mind-boggling array of seating arrangements from which to choose. There are also six USB ports dotted around the rear and the separate temperature controls will keep your passengers happy.

And then there’s the cavernous boot. With the seats in place you get a whopping 1,930 litres of luggage space and that figure rises to a gargantuan 5,800 litres when all the seats are removed. 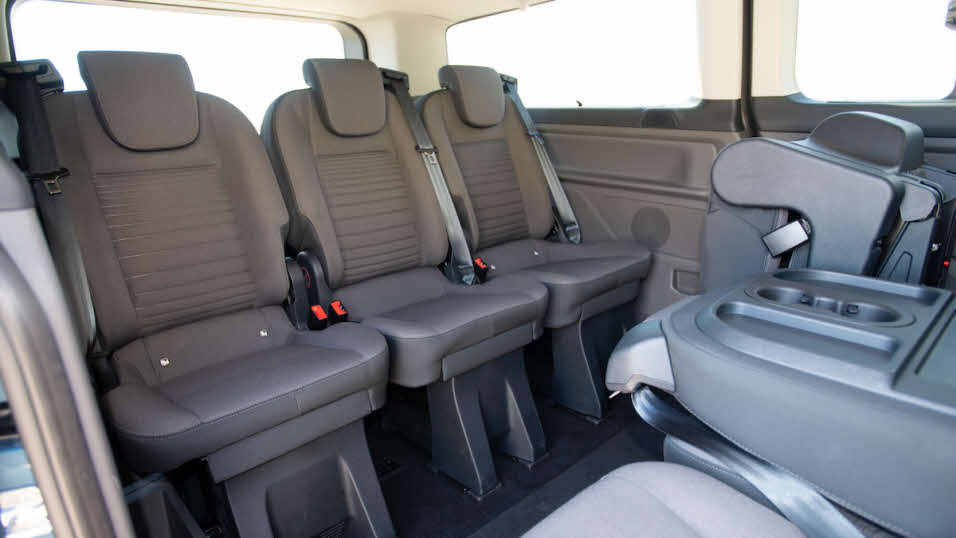 Ford’s latest high-performance EcoBlue 2.0-litre diesel engine is compliant with the new stringent Euro 6 guidelines and comes in three power output ratings. Our test vehicle was fitted with the mid-range 128bhp motor but you could opt for the lower 103bhp or the sporty and more powerful 168bhp.

Once on the open road, the Tourneo Custom is a hoot to drive. The six-speed manual gear box (there is a six-speed SelectShift auto option which costs an extra £1,440) is a delight to use with easy, short shift changes, while the handling for a vehicle of this size is superb thanks to the Torque Vectoring control which improves traction and road-holding.

I clocked up more than 500 miles and loved every mile of it – as did my eight-year-old granddaughter Evie as I ferried her and five friends to her bowling birthday party!

Great safety features available depending on the spec you opt for include Adaptive Cruise Control, Lane Departure Warning and Collision Mitigation with Pedestrian Detection. A further aid is Trailer Sway Control which is designed to detect ‘snaking’ and “slow the vehicle down by reducing the engine’s torque and gradually increasing the brake pressure on all wheels”. This feature is available as part of the ‘trailer tow attachments’ option.

In Titanium trim tested here you receive 17in alloy wheels and Cruise Control. 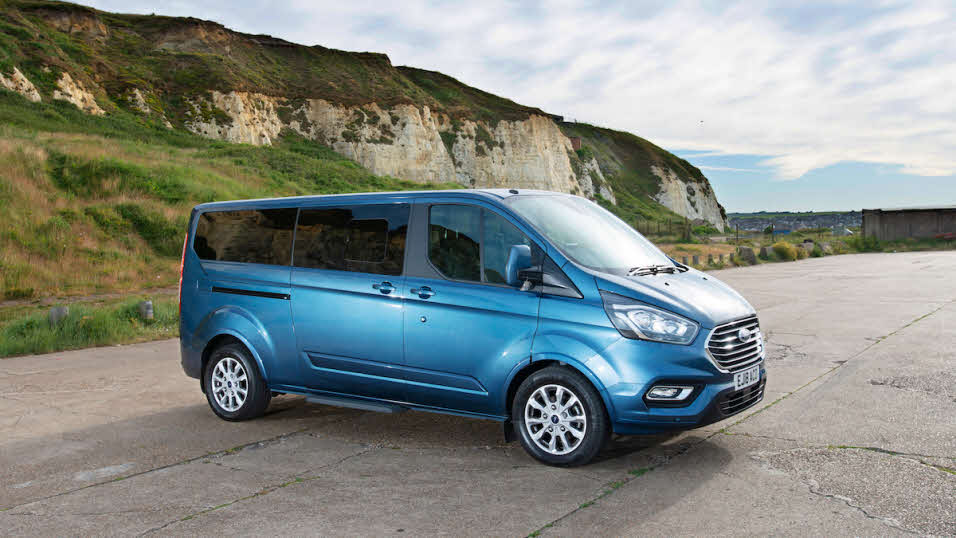 I was hitched up to a very large Coachman which weighed in at 1,630kg but once out on the open road I almost forgot I was towing at all. Not surprisingly the Tourneo was slightly more sluggish off the line than in solo mode but once we were up to pace it was a piece of cake. There was no tugging or pitching that you sometimes get with smaller vehicles and can leave you feeling a little unnerved. In contrast the Tourneo was steadfast and confidence inspiring.

On prolonged inclines, you do have to use the gearbox to keep it on song but that’s no hardship and it responds really well.

Towing such a large caravan is always going to hammer the fuel economy of any vehicle so the lowly 27mpg that I recorded was not unexpected. As a solo unit Ford claims you should be able to achieve around 44mpg but I could only muster 37mpg – maybe I was having a bit too much fun!

It might not be everyone’s cup of tea but if you require a large, all-purpose vehicle that can double as a towcar, then you really should take a look at the Ford Tourneo Custom. It combines everyday drivability with space in abundance, and can cope with a wide range of caravans. I was extremely sorry to say goodbye to this very likeable MPV.

(figures correct when tested in October 2018)