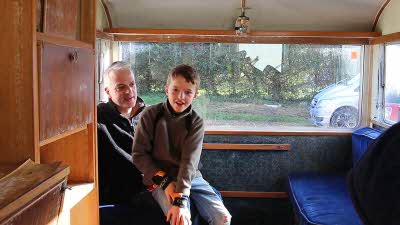 Journeying from Kent to Normandy via the New Forest, Lee and Charlie will follow in the footsteps of Lee’s dad Ronald Davey and Charlie’s maternal great-grandfather Geoffrey Woodcock. The idea to retrace his father’s footsteps and find out more about his wife Helen’s grandfather’s time in the war came to Lee while he and Charlie were refurbishing the 1967 Bailey Maestro caravan that they will be touring in.

“Charlie was learning about the war at school so I was telling him about the roles his grandfather and great grandfather played, and he said it was a shame he didn’t get to meet them. So, to ‘bring them to life’, we thought we’d follow their footsteps from 74 years ago as closely as possible from the camp where my dad was based, to a ferry crossing that closely resembles the journey his great grandfather took to Juno Beach on D-Day, ” said Lee.

Lee’s father Ronald was stationed at the Officer Cadet Training Unit (OCTU) in Wrotham, Kent as an instructor teaching candidates to ride motorcycles and drive vehicles such as Jeeps and trucks. Lee and Charlie will stay at the Club’s Bearsted Club Site, near where the OCTU was based, for two nights over the bank holiday weekend before heading to the Club’s Centenary Club Site in the New Forest for another two nights. The site was built on a WW2 air base and is located near where Ronald worked as a despatch rider convoying vehicles to waterproofing stations on the south coast. Helen’s grandad Geoffrey was stationed just a few miles away in Dorset with the glider regiment. He was in the 249 (Airborne) Field Company RE at Tarrant Rushton Airfield and was attached to the famous 6th Airborne Glider Regiment, who landed at Pegasus Bridge ahead of the D-Day invasion.

Geoffrey arrived at Juno Beach by landing craft on the morning of D-Day, having crossed from Southampton. Lee and Charlie will follow the almost identical route that the Portsmouth to Caen overnight ferry crossing takes to Normandy. Spending four nights at the Club’s Port’Land Site, they will explore the nearby area where Geoffrey helped capture five Nazi prisoners, reinforce Pegasus Bridge, clear mines and repel the German counter attack at Ranville.

“I can’t wait to retrace the footsteps of my father and Charlie’s maternal grandfather, especially as we’ll be doing so in the run up to D-Day. It’ll be great to create our own memories on this exciting adventure too,” said Lee.

Harvey Alexander, director of marketing at the Caravan and Motorhome Club added: “As a Club, we strive to inspire adventure, and we love to see families holidaying together and sharing special experiences so we are delighted to be helping Lee and Charlie on their trip. We can’t wait to hear all their stories on their return.”