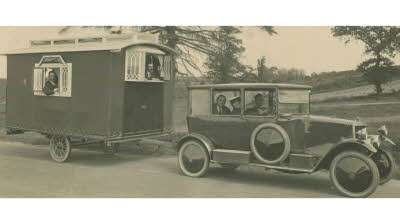 A wartime revolution in motoring

Remembrance Day is a great time to learn about the lesser-known stories of post-wartime Britain. The 'Caravans and Charabancs - Leisure Motoring after the First World War' exhibition is a great opportunity to discover how social and technological developments in wartime led to a revolution in motoring.

Supported by the Heritage Lottery Fund (HLF), the project is at the National Motor Museum (Beaulieu) in the New Forest. It tells the story of the First World War’s influence on post-war leisure motoring through the Club Collection of memorabilia.

We transferred our collection to Beaulieu from Club headquarters in 2006. The collection dates from the birth of leisure touring in 1885 through to the Club's centenary celebration in 2007 and beyond.

The project gives the public a chance to learn about previously unseen aspects of the Club and the National Motor Museum’s fascinating photographic collection.

The HLF funding will also let the museum purchase a unique private collection of over 400 historic photographs and postcards featuring charabancs, an early type of long distance coach.

Angela Wills, curator of the Club Collection explains: "As the war ended, those that returned home often did so with new ambitions and a bonus in their back pocket. Many were introduced to motor vehicles on the battlefield, and some were inspired to put their new-found skills to good use in peacetime.”

Visit The National Motor Museum to see this interesting exhibit and find out more about the Club's history. Why not stay at Black Knowl Club site? It's open until 16 November and is just a 20 minute drive away.