History of the Club 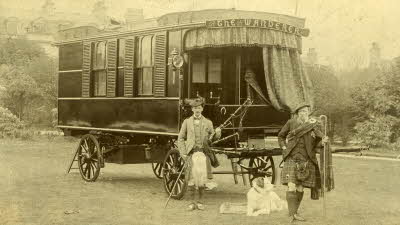 The Wanderer Caravan (around 1885). Dr William Stables (pictured right) was the founding father of leisure caravanning. 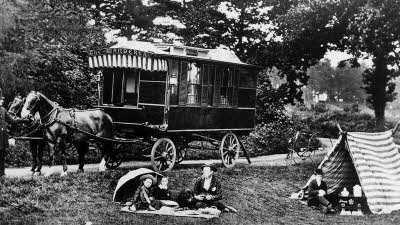 The Wanderer, the first purpose built leisure caravan taking to the road in 1885. It was the inspiration for the Caravan and Motorhome Club. 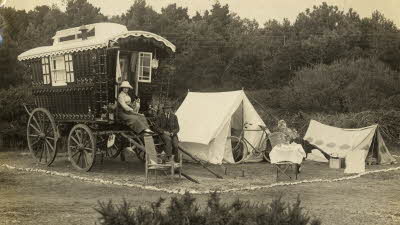 Lepe Beach site near the New Forest, pictured in 1913. 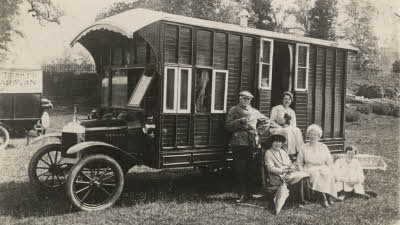 A model T Ford car motor caravan. In the 1920s, petrol tax on the large engines made many revert back to pulling a caravan by car. 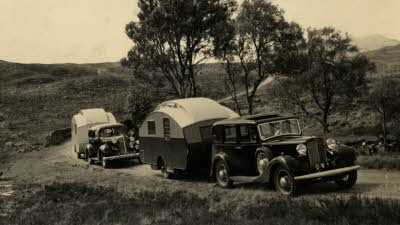 The Hutchings family enjoying a caravan holiday with their Lady Nimble caravan near Lyndhurst in the New Forest (1920s). A motor caravan in the 1950s (a Winchester conversion from an Austin van). 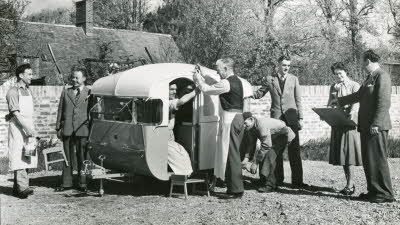 Designers putting the finishing touches to the Royal Rollalong Caravan in the early 1950s. 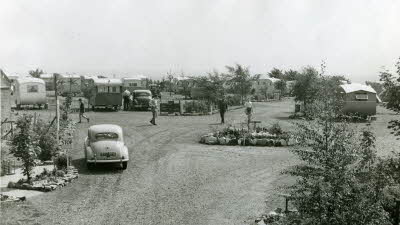 Our Crystal Palace site pictured in 1957, quite soon after it opened. 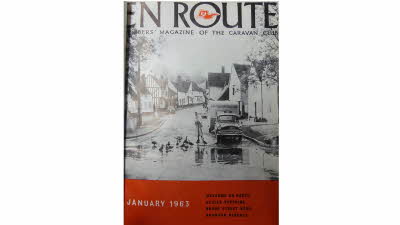 The front cover of the first ever En route magazine (1963) which was the original title of The Club’s own magazine.

Founded in 1907 as the Caravan Club and now known as the Caravan and Motorhome Club, we're Europe’s biggest touring community, helping caravanners, motorhomers and campers access over 3000 stunning locations in the UK and Europe.

We’ve spent over 110 years enjoying the great outdoors and can offer advice and inspiration to enable people to book their perfect touring holiday. The club also provides a series of quality, value for money products and services to enable holidaymakers to make the most out of their leisure time, building lasting memories, experiences and adventures.

Take a look at our timeline…

The first purpose-built touring caravan, The Wanderer, is built to the design of Dr William Gordon Stables, an inspiration behind the founding of The Caravan Club. Two horses tow his caravan on an epic journey of 1,300 miles between Twyford, Buckinghamshire and Inverness.

On 14 June, The Caravan Club of Great Britain and Ireland is founded at 72 Stamford Brook Road, London - the home of barrister, journalist and countryside enthusiast, J Harris Stone.

The Club holds its inaugural Annual General Meeting at the Whitehall Rooms in London on 19 February. In May The Club's first rally is held in a meadow in Ockham, Surrey.

Two further rallies take place – one near Hounslow, West London, and one at Cane Hill near Coulsdon, Surrey, which was featured in the English Illustrated Magazine.

While The Club was founded by 10 men and one woman, within only five years women accounted for nearly one third of The Club's 267 members.

By the time of the Annual Dinner in June, The Club had hosted 13 rallies and 30 Council meetings since inception. A total of 450 pitches had been registered in the UK and Ireland. Sussex led the way with 51.

The success of the Ipswich meet of The Caravan Club makes front-page news in the Daily Mirror.

Wittensford in the New Forest and Mablethorpe on the north Lincolnshire coast become new rally destinations.

The Annual Dinner is cancelled due to the First World War.

At the AGM, the Council reports that Club members have provided caravans to the Red Cross in order to aid the War effort.

In September, Club founder J Harris Stone is owed more than £8 in expenses. The Club's coffers stand at just £3!

Whit Monday rally in May at Abbey Court in Kent is the last big gathering for 15 years.

A meet arranged at Cirencester Park is cancelled after disagreements over dates and only four bookings.

Honorary Secretary, J Harris Stone is the only attendee at a Council meeting in February.

The Club moves to new headquarters, at 140a Shaftesbury Avenue in London’s West End.

Membership of The Club drops to just 80 and Stone is running The Club almost single-handedly.

Owners of The Caravan and Trailer magazine Mit Harris and Bernard Dolman officially take over the running of the reborn Club in September.

The first Centre - Northumberland and Durham - is started, thanks to the efforts of a Colonel H Millican.

The Caravan and Trailer magazine is bought by the Link House Group - an old, established publishing house.

Some 181 outfits attend the National Rally at Warwick Castle - a record attendance for a club meet in Britain.

An autumn National rally in Southport attracts 100 caravans and a great deal of interest from the non-caravanning public and press.

With the outbreak of the Second World War leisure caravanning activity obviously declines but some rallies are still being held (until petrol rationing in 1941).  Sadly Club Chairman, Jack Jewell, is killed in an air raid.

Delamere Forest, Cheshire, and Cheddar in Somerset are the last two rally destinations during the war years.

Club membership stands at 1,729, with over 200 new members since the outbreak of the war. In August the 100th edition of The Caravan magazine is issued.

Membership stands at a very healthy 4,200 with 13 Centres and Divisions. Caravanners and The Club benefit from the Town & Country Planning Act.

The first official site was created for visitors to the Festival of Britain at Crystal Palace, originally called Caravan Harbour.

HRH Prince Philip, the Duke of Edinburgh is appointed Patron.  More than 60 years later, The Club is still proud to enjoy that patronage.

The Club presents the young Prince Charles and Princess Anne with a fully-working miniature caravan at Buckingham Palace.

West Runton (now known as Incleboro Fields) on the Norfolk coast is the first site signed up under the Lease and Service Agreement system, whereby landowners allow The Club to lease their land at a peppercorn rent of £1 a year.

Thanks to the influence of Director General, Donald Chidson, the towing speed limit is raised by 10mph to 40mph in August.

The Caravan Sites and Control of Development Act 1960 allows The Club to grant certificates to landowners to operate Certificated Locations and hold rallies by virtue of its important exemption certificate.

On 1 January the first issue of The Club’s own magazine, En Route, is published.

The Club’s Foreign Touring Service launches providing free information on all aspects of caravan touring on the Continent.

A motion to allow motor caravanners to become members of The Club is carried.

In April Cooperative Woods (now Abbey Wood) in South London is opened – it is the first large-scale,  municipal,  fully-equipped touring caravan and camping site in Britain.

The Club launches its own caravan insurance scheme – 5Cs – for members only, and membership grows to 100,000.

In October The Club moves its main office from Mayfair to its current location at East Grinstead House.

The Club buys Church Cove, at Landewednack in Cornwall, for the nation as part of the National Trust's Enterprise Neptune scheme, at a cost of £5,000.

The first electric hook-up on the sites network is installed at Abbey Wood – 99% of pitches now benefit from this ‘innovation’.

On 1 May Mayday roadside assistance and recovery service is launched thanks to collaboration with National Breakdown (Green Flag).  The first ‘customer’ is Director of Membership Services, Jack Armstrong, who skidded into a ditch only 20 minutes after the service officially commenced.

The Club receives one of the Queen Mother’s 80th birthday awards for its support of the Keep Britain Tidy Group, and its outstanding record of tidiness and environmental responsibility.

Glanusk Park, in Wales, becomes the first venue outside England to host a National Rally.

The Wanderer makes appearances on two BBC programmes as part of the Club’s 75th anniversary celebrations and makes its last long distance journey, being towed 100 miles from its home in the Bristol Industrial Museum to the Royal Windsor Horse Show.

A celebratory anniversary banquet at Guildhall, in the presence of Prince and Princess Michael of Kent, is held.

Director General, Donald Chidson MC OBE, retires after 34 years with The Club during which time membership grew from 7,000 to 250,000.

The Club moves into the digital age with the launch of its first website.

Sees the launch of online bookings for UK Club sites.

The Club’s historical archive, known as the Caravan Club Collection, now under the care of the National Motor Museum Trust at Beaulieu, New Forest, with a dedicated Curator.

The Club celebrates its Centenary on 14 June, with parties on every site and celebrations throughout the year. There is a garden party at Buckingham Palace and the 80th National Rally is held at Blenheim Palace. In October, Bob Black MBE stands down as Chairman and is succeeded by current Club Chairman, Grenville Chamberlain.

Poolsbrook Country Park Caravan Club Site near Chesterfield officially opens as the 'greenest' caravan site development in the UK with a range of energy-saving technologies including:

All technologies are monitored for suitability for future site developments.

With popularity of caravanning at an all-time high, The Club adds nine new sites to the network.

The Caravan Club Collection at the National Motor Museum continues to grow with historical items on display alongside the miniature Royal Caravan (now returned to The Club for safe-keeping by HRH the Princess Royal).

First Wi-Fi on UK Club sites network.  Wi-Fi continues to be rolled out wherever possible across the country.

On 24 January the Club launched ‘Club Together’, its online community. Designed to give registered users the chance to share their thoughts, hints and tips about caravanning, motorhoming and trailer tenting.

The first Club mobile app is launched – the Club Magazine App.  Closely followed by a UK Sites Booking App in 2016.

The Club is renamed to the Caravan and Motorhome Club, to focus more on the experiences and adventures that can be enjoyed by all of our current and future members. Read about our new brand...

Spring saw the launch of our glamping offering. Yurts and glamping pods are set up on selected Club sites and can be booked via our sister website Experience Freedom.

Delve deeper into how The Club works...