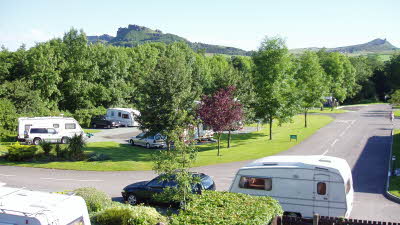 The Caravan Club Site Blackshaw Moor in Leek, Staffordshire will unveil a commemorative plaque honouring the Polish soldiers and refugees that were based at a relocation camp which was located where the Site is today. The plaque will be unveiled on a gatepost from the original camp site entrance on 16 September.

The plaque will honour the lives of the Polish soldiers that fought alongside the British Army in the Second World War, who could not return to their homes with Stalin’s Russia occupying Polish territory. Blackshaw Moor was occupied by refugees until 1964.

Around 18 months ago The Club’s staff at Blackshaw Moor, Anthony and Sheila Kendall, were made aware of the history of the Site. Touched by the news, they wanted to know more, and working with Zosia (Sophie) Biegus and Zbyszek (Tony) Hryciuk, two members of the Polish community in Leek, they found out more about the history of the site.

Anthony said: “This all started last year when Tony (Zbyszek) told us that he and his family had lived here in the 1960s. From The Club’s point of view, I see it as a great opportunity for us to present the site in a different light. This unveiling is a chance for old friends to catch up with each other - in some cases members have some historical connections.”

Some of the accommodation buildings are still at the site, and there are plans to put up photos of the original camp so visitors will be able to see what the camp looked like when it was in use.

The Caravan Club’s Sites’ Committee Chairman, John Lefley, and Regional Manager, Ian Spendlove will be there for the unveiling of the plaque in September.

John Lefley said: “We are pleased to be unveiling this plaque - it’s a chance to pay our respects to the Polish soldiers and refugees that fought bravely alongside the British Forces in the Second World War. It’s an opportunity to bring the community together and appreciate the rich history of Blackshaw Moor.”

The site was first used as an American 565th US anti-Aircraft Battalion transit camp in 1943. After the Americans left in 1946, the camp was used for resettling Polish soldiers returning from war in Europe. The Plaque reads, “This Plaque is in commemoration of the Polish Soldiers who fought alongside the British Army in WWll, and their families who made their home on this site 1946-1964.”

Blackshaw Moor has published a small booklet for those wanting to learn more about the history of the site which is currently on sale at the Site’s reception.

For further information and details on the Caravan Club’s membership visit www.caravanclub.co.uk.

The Caravan Club offers its members over 200 Club Sites and 2,500 privately owned places to stay, and provides all members with expert advice, overseas travel services, financial services and exclusive member offers and discounts.