Braveheart to Bond: Explore some of Scotland’s stunning film locations with the Caravan and Motorhome Club 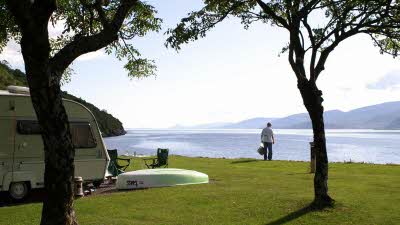 Why not take advantage of the year round benefits of membership and set off on a Scottish adventure?

Here are six of the Club’s idyllic sites with a famous connection to explore in 2018:

Set at the bottom of the rugged slopes of Beinn Eighe and along the shores of Glen Docherty, Kinlochewe Club Site is somewhat famous on the network. The Site played host to the stars of 2007 romantic fantasy film Stardust; including Robert de Niro and Michelle Pfeiffer, when it was used as a base camp for filming in this beautiful region. Kinlochewe offers a slower pace of life and is a great spot to wind down after a busy day outdoors exploring the surrounding mountains. This Site is also popular with bird lovers trying to get a glimpse of the golden Eagle at nearby Beinn Eighe National Nature Reserve.

From £18.70 per standard pitch per night based on two adults sharing

Located in the heart of Scotland, Cairngorm National Park is the real life inspiration behind Disney Pixar’s 2012 movie, Brave. Fans of the fictional Clan Dumbroch and Disney Princess Merida can visit the iconic Braemar Gathering which inspired the competition of suitors in the movie, or take a short drive from Dunnottar Castle which inspired the magical animated castle used in the film. For the ultimate getaway to this striking region, stay at Grantown-on-spey Caravan Park Site in the Cairngorm Mountains. The Site is the perfect base for those that enjoy snow sports in the region during winter but is also very popular with families.

Home to one of the most famous battles between Scottish Clans, Glencoe also played host one of the most recognisable Special Agents in the country. Featuring in the 2012 film Skyfall, the childhood home of James Bond, Skyfall Lodge, was set and filmed in the natural beauty of Glencoe. For 007 fans, combine a visit to this stunning landscape with a stay at the North Ledaig Club Site. This 30-acre Site is located on two miles of sandy beach and has been awarded the David Bellamy Conservation Award. The Site is ideal for those who love watersports and is only a 40 minute drive to Glencoe.

Deemed one of the most iconic film locations in Scotland, Fort William and the surrounding area welcomed the magic of the Harry Potter movie series for over ten years of filming. Muggles will recognise the infamous Rannoch Moor in the area, where the dementors boarded the Hogwarts Express in the first instalment of the final movie. The West Highland Line also runs through Fort William with services from Edinburgh and Glasgow and will be familiar to Potter fans as the route of the Hogwarts Express.  For those looking to be close to all of the enchanted action, Bunree Club Site offers a great pit stop. The Site is only a 20 minute drive from Fort William town centre and is on the water’s edge of Loch Linnhe.

From £17.50 per standard pitch per night based on two adults sharing Mon-Thurs during mid-week discount periods

Situated just north of Edinburgh, Perth plays host to the filming location one of the most iconic Scottish movies of all time, Braveheart. Some of the best known scenes of the 1995 classic starring Mel Gibson, were filmed at Loch Leven in Perth including the famous mountain walk of William Wallace after the killing of Mornay. For the perfect Scottish getaway this year, combine a trip to Loch Leven with a stay at nearby Balbirnie Club Site only a 30 minute drive away. The Site is set within 400 acres of parkland and is a popular stop off point on the network with hikers, cyclists and dog walkers.

From £13.50 per standard pitch per night based on two adults sharing Mon-Thurs during mid-week discount periods

As one of the most iconic takes on the Shakespearean classic, Justin Kurzels’ 2015 adaptation of MacBeth is set on the ruggedly pretty Isle of Skye. The Island’s mysterious landscape provided the moody backdrop for the timeless tragedy and played host to the gruesome murders and scary death scenes that feature in the film. Located just over an hour’s drive away, Morvich Club Site is the closest on the network to this intriguing area. The Site is hidden within the green valley of the Highlands and offers guaranteed beauty to all visitors since the area has been designated a National Scenic Area by the National Trust. In addition to this, the National Trust also organise guided walks from the Site so it is a great choice for those looking to explore the surrounding area on foot.

From £17.80 per standard pitch per night based on two adults sharing

Scotland has some of the most breath-taking scenery in the world, it’s no wonder it provides the backdrop to so many iconic films. Scotland is the ideal location for anyone who wants to experience adventures in the great outdoors and also enjoy City culture.”