With a price tag in excess of £18,500 the Bailey Phoenix 440 is more expensive than most entry-level models. Rob McCabe assesses whether it offers good value.

Not so long ago, most caravan manufacturers would have been perfectly content for their lowest-priced offerings to be described as ‘budget’. Not any more. Most entry-level tourers are very well-appointed beasts now and come with price tags that can hardly claim to fall into the ‘budget’ category.

The Bailey Phoenix 440 is a case in point. The Phoenix range replaced Pursuit
as the lowest-cost offering in the Bristol manufacturer’s portfolio but offers noticeably higher levels of equipment than its predecessor. Having said that, this fixed-bed/ end-washroom model will set you back more than £18,500 on the road, which is still a fair wedge for most of us. 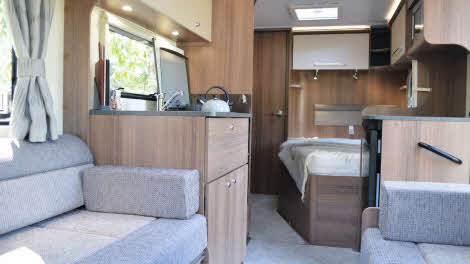 Not many trees were harmed in the making of the Phoenix. Its Alu-Tech construction means the upper body panels are attached to a composite plastic skeleton and held together by a series of extruded joints. Pursuit owners will be among the first to notice the new nose job, topped off by a smart panoramic centre window. Inside, good times lie ahead for Phoenix buyers (there are seven models to choose from) if they’re all put together like this one, with no annoying squeaks, graunches, snags or unsightly panel gaps anywhere on board. The wiring that runs inside the lockers could have been tucked away more tidily, but that’s a minor issue in such a nicely put-together new caravan. 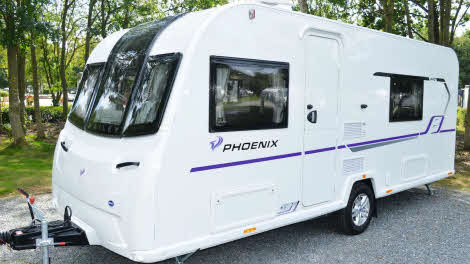 An MTPLM of more than 1,300kg doesn’t qualify the 440 as a featherweight, but it’s a respectable enough figure that brings a wide range of suitable towcars on to its radar. The gas locker is on the offside wall, just ahead of the axle – which helps the quest to keep noseweight in check and achieve a nicely balanced outfit.

You get a built-in hitch stabiliser, of course, but the entry-level status of the Phoenix means the electronic ATC system is a £42 extra. I’d certainly be reaching a bit further into the piggy bank to specify that. 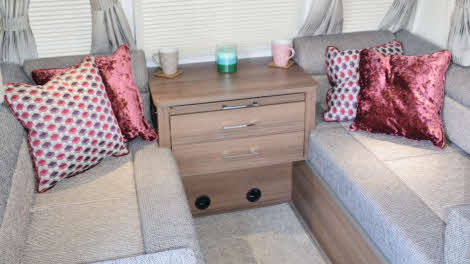 Two things immediately stand out in the front lounge. The first is that it’s tiny. The second is that the nearside sofa has a built-up edge to lean into on the section nearest the door – highly commendable, given that this is neglected by many caravan designers.

Less commendable is the fact you need to shell out an extra £229 for the so-called ‘dressing pack’ to get the two little rectangular bolsters shown in the photographs. This pack also includes four scatter cushions, a pair of wool throws and a carpet section for the rear washroom. Given that the lightweight scatter cushions have little substance and that the washroom is better off without a slab of carpet anyway, you would be better advised to visit the local department store’s home furnishings section and save yourselves a tidy sum in the process.

That said, the lounge is pleasantly comfortable for two; the curved backrest is nice to lean back against. The big panoramic window looks impressive and helps make this area feel light and airy. If you need to use the freestanding table, you have to bring it all the way forward from its dedicated storage recess in the bedroom. This recess is open to view, which certainly makes it easier to access, but it doesn’t do anything for the overall appearance of the bedroom.

As well as having mains sockets in all the important places, the Phoenix also features USB charging slots built into two of the reading lamps – one in the lounge and another in the bedroom. There’s another USB slot in the good-quality stereo, so you can connect your phone or tablet and play your own music through the built-in speakers. Given that the nominally four-berth 440 is more realistically a couple’s caravan, the amount of storage on offer is exceptional – and so too is how you get to it. There are two exterior-access hatches – one leading to the chasm under the double bed and another serving the front seat locker. 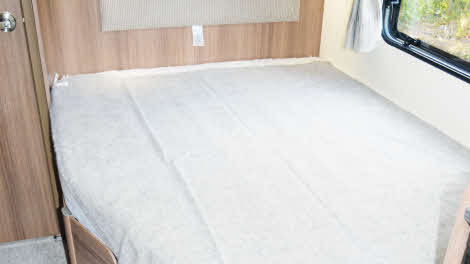 While chatting with dealers about second-hand caravans I’ve discovered that so-called ‘French bed’ layouts can be tricky to shift from the used forecourts. For a long time, this set-up was the one everybody wanted, before the upstart island bed came along and spoiled the party.

Well, Bailey clearly sees life in it yet – and there is indeed much to like about the set-up in the 440. The bed itself is lovely, offering fine support and comfort in equal measure, and it’s a healthy 6ft 3in long. Of course, there’s no getting around the fact that whoever sleeps on the left-hand side has some ungainly clambering to do if he or she wants to get up before the other half.

The sunroof allows you to welcome the morning into the room before you’re ready to open the blinds, there are over-the-shoulder shelves for glasses of water, phones and the like, and there’s a mains socket on the usefully roomy shelf on the offside wall.

Up front, the sofa converts into a compact double. While it may not be the biggest bed ever, you won’t get many complaints from overnighting guests, with the level of comfort aided by cushions that lie nice and flat thanks to the absence of any noticeable kneerolls. 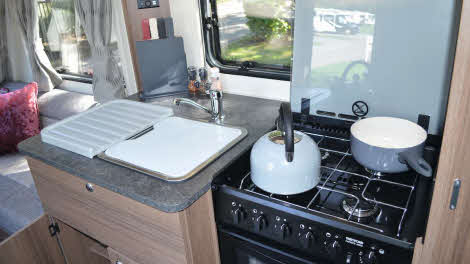 There’s little hint of the Phoenix’s lower-cost credentials on show here. Whereas the Pursuit got by with a three-burner hob and a combined oven/grill, the Phoenix is a four-burner job (no electric hot plate, mind) with separate grill and oven. The hob itself is covered by a hinged panel that matches the worktop, which not only gives you valuable extra preparation space but also looks fantastic too. The good-quality microwave is fitted at mid-level for ease of access and there are lots of storage options at your disposal. 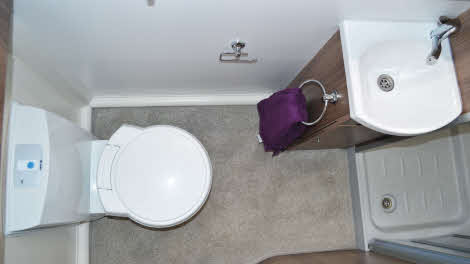 With nothing more than a little skylight, it feels a bit gloomy in here – especially with all that dark-hued wood – so you’ll probably want the lights on, even in daytime. But what it lacks in natural light it certainly makes up for in terms of space. There’s enough room to get changed and a full-sized shower cubicle – although that facility is slightly let down by the fact there is not so much as a soap dish to place things on.

The mirror above the vanity unit is served by an LED strip – a classy touch. But many will feel the horizontally orientated mirror is the wrong shape, given that a fuller-length mirror would be much more useful when dressing.

A line of ambient lighting runs above all the overhead lockers throughout the caravan, which imparts a pleasing glow in the evening. You get only two reading lights in the lounge, although a couple of lamps built into the picture window surround provide some back up. Even so, a little table lamp brought from home would give the finishing touch I think it needs here.

The washroom and bedroom are spacious, but the lounge is cramped – if that set of priorities matches your own, this handsome, well-presented outfit is worth closer scrutiny.

(figures correct when tested in October 2018) 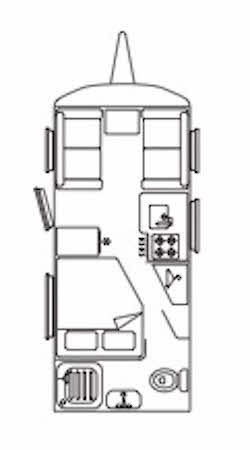