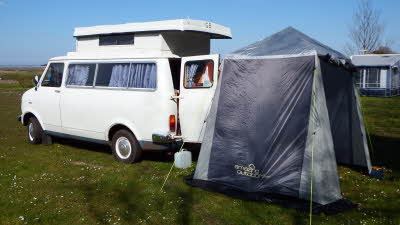 This magnificent stately home is surrounded by stunning scenery of rolling parkland, a national nature reserve and a bea...

Sandringham House, the Norfolk country retreat of Her Majesty the Queen, is set in 60 acres of beautiful gardens and ope...

Northgate Hall Farm
We stayed for a few hours, then left. Our experience; We arrived on site, with a four berth touring caravan, early afternoon on Sat 18th September. We had been told that the CL was fully booked, but alternative pitches, with hook-up, were available. We had been informed, by message, that our pitch was on an area called ‘Stable View’. After negotiating the very uneven and potholed track to the farm, we found that the pitch we thought we were getting was already taken by a motorhome. We were taken aback to find our allocated pitch was next to it, just outside the gateway to the farmhouse, on a small piece of scrubby, uneven land, in a tight corner bordered by the stables wall and the farmhouse garden fence. On examining the pitch, we struggled to find a way of siting the caravan so that it would be level. There was barely any room to manoeuvre the van, and our drawbar impeded the gateway, but there was no other way to site the van. Using some bricks we were able to achieve a satisfactory level, at the expense of the clutch! Hook-up was via an extension lead, partially covered in a box, and shared with the neighbouring camper van. Access to water was via a hose pipe lying, unprotected, on the grass, and a tap concealed in the hedgerow. There were no bins for waste disposal in this area. No one came out to greet us, or to check if we were ok. We went out to visit Wells. On our return, late afternoon we took a stroll around the site. We discovered the official CL. We also realised that there were 5 alternative, unofficial sites, each hosting 2-4 caravans. Our stroll was accompanied by very noisy farm machinery/tractors; to be expected on a working farm, but also four constantly barking farm dogs. No peace and tranquility here. We returned to our caravan and discovered that the garden gate had been left open. Within moments of our return, the farm dogs were out in the garden and in front of our caravan, again constantly barking. The smallest dog stayed there barking for over half an hour, non-stop, until the farmer returned home at about 9pm, and shouted at it to go inside. During the constant dog barking, no one came from the house to quieten them, and in this time, we made the decision to pack up, even though it was now dark, and leave. Our situation had become intolerable. Any semblance of a peaceful time away was in tatters and for all we knew, the dog could have stayed there barking all night. We messaged the site host to tell her we were leaving, and why, but received no reply. Our conclusion is that this host wants to make as much money as possible from hiring out any surplus piece of land, regardless of it’s suitability, with the minimum of effort/input. Worse, they are using the reputation of the Caravan and Motorhome Club, to attract people to the site, and then offering sub-standard accommodation/facilities. North Norfolk has many quality, welcoming CL’s. Our advice is to go elsewhere.

Northgate Hall Farm
Just back from a 3 week stay, lovely dog walks from site and easy to walk to coast path and head to Wells or Stiffkey. Owl visited every night. Pub just down the road which is dog friendly and good food. Will be looking forward to visiting again next year.

Northgate Hall Farm
We booked this site 4 days in advance ( 2 pitches) and owner very friendly and said just turn up and she will accommodate us in field as no space on CL. That was fine, we are self sufficient with no need for EHU. We had a bit of confusion on arrival as not sure where to go but quick chat with owner and we were accommodated in CL alongside 2 others. We left the money as instructed, at the house and did not see the owner, which was fine. The field is approached via a bumpy track so take it slowly! The site is well kept with short grass and has EHU and water / waste disposal. There are big bins on site for both recycling and non recycling. Dog walks are all around directly from site. The site is very quiet at night and the only sounds we heard were the nearby owls! It is not far from the coast road with easy access to beach/ harbour resorts. The site could be improved by maintaining the area for toilet waste disposal. It is not the most pleasant job; it has a manhole cover and area to stand is surrounded by nettles/weeds, which doesn't make it any easier! A regular strim round would be very helpful. This is a nice quiet farm site with lovely rural views Northgate Hall Farm
Another holiday at the farm completed. Peaceful and tranquil. Plenty of dog walking and only a couple of miles from Well next the sea. Owner friendly and helpful but leaves you to get on with your holiday. Nestled in rural Norfolk, you cant get better.

We stayed for a few hours, then left. Our experience; We arrived on site, with a four berth touring caravan, early afternoon on Sat 18th September. We had ...

Just back from a 3 week stay, lovely dog walks from site and easy to walk to coast path and head to Wells or Stiffkey. Owl visited every night. Pub just down ...