We are sorry but electric cars cannot be charged on this CL.

Explore the workshops at your own pace to see how for generations, Inigo Jones has transformed slate into both essential...

The Llangollen Railway is a volunteer-run heritage railway that meanders alongside the picturesque River Dee, through th...

Over 64 acres of beautiful gardens with fantastic views of the Dee, perfect for exploring and inspiration. Motorhome par...

Under the Edge Hill area of Liverpool you will find a mysterious 19th century network of tunnels created by an eccentric...

Does what it says on the tin!

Caerhun Farm
We used this site as a base to tour North Wales from, and found it to be ideal for what we wanted. We didn’t need a site with bells and whistles as we planned to be out and about a lot. It’s easy to get to, and straight off the road. Yes there is traffic on this road, but just within normal commuting hours. It goes quiet at night. Yes, you can hear the occasional dog barking in the distance. Obviously farm dogs, which live outdoors, and are probably barking at nocturnal wildlife. They don’t bark continuously, it’s off in the distance, and only audible because the valley is otherwise so still and quiet during the night. The owners aren’t constantly checking on you, although they do know when you’ve arrived, are available 24/7 by phone, and visit daily to remove rubbish from the bin. Tom, the owner, who owns a second site just up the road, greeted us soon after our arrival, and gave us useful info on the area, in relation to the things we wanted to do. There are no recycling bins because this Council’s recycling is done at the depot. The site is well kept and has views of the surrounding hills above the garden walls. £20 per night seems to be the new normal, post lockdown price for CL’s these days. If you want activities, facilities, or total tranquility, don’t stay here. If you want a practical, accessible, pleasant site, book it!!

Expensive for what it was...

Caerhun Farm
We booked a week here before the previous review was posted, and have to say we agree with many of the sentiments expressed. The site is a former walled garden, completely flat, with five gravel pitches, quite well spaced, but close to the road. Our main issue however was the complete lack of security, with the owners living off-site, and we went straight out and bought additional security measures the following day. One afternoon a woman in a hoodie appeared in the site from the field at the back, walked straight across and out onto the road. She didn't look like your average hiker, and I did warn the other caravan owner to ensure everything was secure, when they went out. I am not a nervous person by any means, quite the opposite, but did feel vulnerable here. I heard the dogs, most nights, around 2am, and again before six, but they seemed to be some way down the valley, so not loud enough to prevent me sleeping. Still annoying however. There was also a dog barking loudly in the adjacent house, which the site owner said belonged to his son, although it quietened down after the second day. There were no recycling facilities, everything went in the one bin. The grass around the waste and water taps was extremely boggy, as the taps on both were dripping constantly. The grass was mowed one day but the clippings not cleared up correctly, leaving it to be walked into the van. I do agree with the previous comment about the apparent lack of interest by the owners, and felt this site was poor value for £20, by far the most expensive of our extensive travels this summer.

Caerhun Farm
We arrived 4th July 2021 for a 5 night stay. Site is pleasant enough with all one needs though a little spartan and owners do not live on site. Owner called the next day and enquired rather belatedly if we had found everything! He was mainly interested in the £90 pitch fee. I had read reviews about nuisance dogs at a neighbouring farm and all seemed OK for the first 2 nights. The 3rd night was a nightmare with dogs howling and barking until 2 am and beyond. The next day I phoned the owner who was very apologetic but could not offer us a pitch on her other site and would not refund us our remaining two nights. We left the next day for a lovely site bear Abergele. Note to self - never again book a site where owners do not live on site and never ignore reviews. This CL is clearly simply a business opportunity for these owners who have little pride or interest in the comfort of their guests. I remain disappointed that they were not prepared to refund our fees especially as the site clearly had vacancies and was not fully booked.

Caerhun Farm
We stayed here from the 18th July 2020 for 5 nights. Very easy to find, and within a walled garden which was very nice. There are lovely views of the local mountains and a 5 min drive to Conwy centre, and Bodnant Gdns 10 mins. The site is near a road and you can hear traffic but it isn't a busy road so after 5pm you hardly hear anything. There is plenty of room for the caravan on hardstanding pitches, you do need a coaxial TV cable otherwise your TV will not work. People mentioned dog noise, you could hear a dog barking but very occasionally. Mr and Mrs Roberts came to the site on a few occasions making sure all was ok, one other caravan owner had mentioned the hand sanitiser was not working, this was fixed straight away. We would recommend this site to both couples and families plenty of room for children to run around.

Caerhun Farm
We arrived Friday evening in the wet but no problems pitching up as hard-standings very spacious, Yes there is road noise (this is a B road so the traffic noise was not constant) & yes we did here dogs very occasionally, but did it put us off - No. The farmer arrived and explained where everything was - apart from the bins - there was none. There is a sign on the wall stating no dogs allowed but when we booked the owner confirmed our dogs where allowed on this site but insisted they where kept on leads as sheep where in the adjacent field - this we have no problem at all with and is a rule of the club anyway. Walking from the site with 2no Labradors wasn't perfect but the lane down the way was very good & the little church at the end was worth a visit with the river below. The owner did see us again (checking we cleaned up after our dogs!) I assured him we always clean up - even if we have to bring it home with our rubbish. All in all this is a lovely site for visiting north wales and was not put off by the minor issues we found, We did feel secure even though there is direct access from the road (The farm house adjacent is occupied & the people use the CL access to there house) would I go back - 100%yes. a well kept & clean site with great views.

Does what it says on the tin!

We used this site as a base to tour North Wales from, and found it to be ideal for what we wanted. We didn’t need a site with bells and whistles as we planned ...

Expensive for what it was...

We booked a week here before the previous review was posted, and have to say we agree with many of the sentiments expressed. The site is a former walled ... 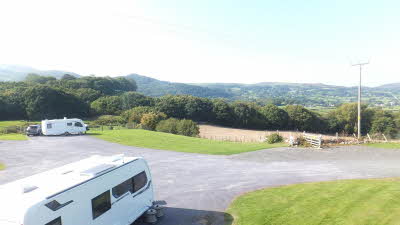 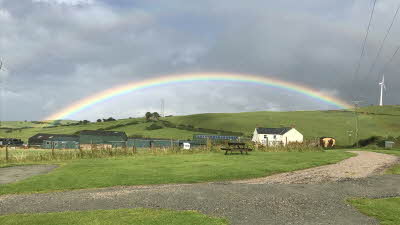 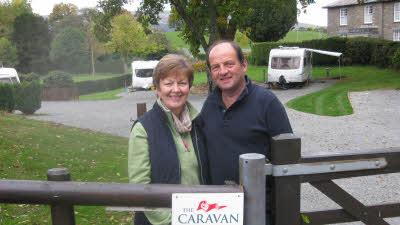