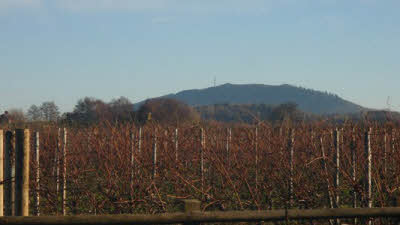 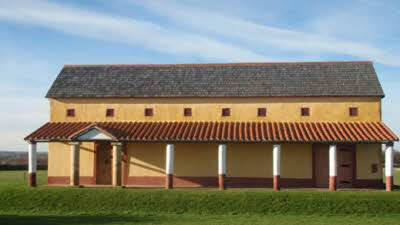 Glebe Farm is set in the idyllic village of Wroxeter, 4 miles East of Shrewsbury on the B4380. In walking distance are the famous Roman Vineyard and the Wroxeter Roman City and also adjacent is Wroxeter Hotel. The site is very tranquil and sheltered, set on a small farm. The pitches are spacious on a large level area of field, which is actually a Roman scheduled monument in our ownership. There are views of the vineyard, the resident alpacas are alongside and views of the Wrekin, a local land mark.

Shrewsbury medieval town is some 4 miles away and is the birthplace of Charles Darwin. It is known as the town of flowers and the Dingle in the Quarry Park in the town centre was created by the famous gardener Percy Thrower. There are many individual shops along with the well known major stores. In August each year the Shrewsbury Flower Show is held in the Quarry Park which is second to Chelsea in size.

Some 4 miles East of Wroxeter is the UNISEF world heritage site of Ironbridge and there are some ten museums to visit in the Ironbridge Gorge.

The Wrekin, set in the Shropshire plain is an ideal walking hill and also the nearby South Shropshire Hills.

Nearby is the Severn Valley railway in Bridgnorth and the town is a lovely place to visit. Also nearby is Much Wenlock, the home of the modern day Olympic Games. It is a stunning town to visit with many quaint shops. Another beautiful town is Church Stretton, often called Little Switzerland because it is surrounded by hills. It has quaint shops very upmarket, also Ludlow a beautiful town and has its famous food festival with many Michelin star restaurants outside of London.

Wroxeter is only some one and a half to two hours from the Welsh coast. A base to stop on the way to the seaside or to stay for a countryside holiday in unique surroundings.

Now, Wroxeter itself also known as Roman Viroconium or Uriconium was the fourth largest Roman city in the United Kingdom. It is owned and managed by English Heritage, apart from the land of the Glebe Farm. Wroxeter was one of the first archaeological visitor attractions in the country. The site museum and audio tour reveal how Wroxeter worked in its heyday. In 2010 a project between English Heritage and Channel 4 saw a Roman town house built. A programme went out on the building called `ROME WAS NOT BUILT IN A DAY`.

The caravan park is close to the River Severn and many tourist attractions. It is on a cycle and walking route. Buses run from by the Museum to Shrewsbury, Ironbridge and Telford.

David and Christine Millington and family welcome you to their caravan park.

Weston Park is a 17th Century stately home on the Shropshire/Staffordshire border. Visitors can explore 1,000 acres of C...

Experience the adrenaline-fuelled thrills of off-road karting as you put your driving skills to the ultimate test on one...

Ludlow Castle is a ruin nestled in the glorious Shropshire Hills at the heart of Ludlow. This has been the home to a num...

Lovely site in a beautiful location

Glebe Farm Caravan Site
We just spent 4 nights at this lovely site, as we were attending a family wedding at Wroxeter Hotel, just around the corner. As others have mentioned, you may hear some noise from weddings, but we did not find this loud or intrusive (there was another wedding over the weekend.). At our wedding, the guitarist was not allowed an amplifier in the teepees. The area is beautiful and we visited the Roman Baths and museum - the audio tour was very interesting and we enjoyed finding out more about the Roman city. We will be watching ‘Rome Wasn’t Built in a Day’ as soon as we get a chance. We also walked to the Vineyard, and whilst enjoyable enough, it could be an absolute gem with a little more development. If visiting again, we would take our bikes so that we could visit further afield. We also walked to The Horseshoes Inn at Uckington, which took about 20-30 mins along country lanes, mostly without traffic. We didn’t eat there but the menu looked good, although not a budget option. The site was easy to find but some of the signage could be clearer. The field is gently undulating but we were able to park our motorhome level, using ramps. There is an honesty box for payment and the charge was £14pn, but this was not displayed anywhere, and like others, we did not see the owner. The pitches were roomy and there is ehu available. The electric did trip out several times, at the main, but was quickly rectified by a regular camper (also an electrician) Apparently, they have had the system upgraded, but no one had reported that there was still an issue. As we left, the owner was arranging another visit from an electrician, so hopefully this issue will be resolved. I will also post this review on Search for Sites, so that I can add some photos. The ones on the CAMC website, just don’t do it justice!

A great location, but lack of information

Glebe Farm Caravan Site
The site was easy to find. It is a field; grass is cut but not very short. It is bumpy, we hit lucky and found ground that was flat! Views of the Wrekin are splendid. The site is generally quiet, but backs onto the hotel, which I guess could be noisy if events go on into the evening. When we were there is was just the afternoon - so no issue. The local church and vineyard are both worth a visit. There is no information about how to pay. There is a post box near the waste area (which could do with some improvement) but no information, no envelopes etc (which we have experienced elsewhere) Others on the site for several days had seen no one. We had to ring to find out about payment (we only stayed one night), and as we didnt have the exact money (£14), send a cheque afterwards. Although it had been dry, and I think the field is fairly well drained, our front wheel drive Ducato PVC was a bit reluctant to move forward on departure. Once moving it was fine, but perhaps not the best site for motorhomes.

Glebe Farm Caravan Site
This is a good location for Shrewsbury, Iron Bridge Museums etc, but the field is very uneven and difficult to get a motorhome level. We stayed but didn't see anyone from the campsite and had to hunt down the owners address to post money through the letter box. This could be a brilliant site with a few level hard standings for motorhomes and a welcome from the site owners.

A lovely rural CL handy for Shrewsbury and Ironbridge

Glebe Farm Caravan Site
Towards the end of September we spent 6 nights at Glebe Farm CL in our caravan. Access was easy and loads of space surrounded by fields containing sheep and alpacas. The grass was close mown, green and free of clippings. The classic CL site has 5 electricity points, the terrain is slightly rolling but well drained and with plenty of flat areas suitable for RVs as well. The main gates are open all the time and we felt a little insecure. This could easily be resolved with a chain or coded padlock. It faces South East so brilliant sunrises over the Wrekin landmark. The back fence butts up against the Wroxeter Hotel garden so you may occassionally hear marriage celebrations. The site forms part of the Wroxeter Roman city and is just a 5 minute walk to the English Heritage excavations and visitor centre. Excellent. The owner lives nearby and is easily contacted by phone. Do try local treats: Fidget Pie, Eley Pork Pie by Ironbridge and the Wrekin Blue cheese!! All in all we had a wonderful stay on this brilliant CL. We cannot wait to return.

A perfect Basic CL in a stunning area ...

Glebe Farm Caravan Site
When we arrived (directions in the book are slightly misleading) but we drove slowly and not a problem. Easy access into the field, and we couldn’t believe there was no one else there. We had been prewarned that the electric was not working, so not a problem, Lots of space to choose a pitch, fantastic views of The Wrekin and the surrounding area. Lots to explore, Wroxeter Roman Site , the Church in the village and the Vineyard are all within walking distance and worth a visit. We also walked up The Wrekin for stunning views and visited Ironbridge. If you are happy with a basic site, as we often are - this fits the bill perfectly! Thanks.

Lovely site in a beautiful location

We just spent 4 nights at this lovely site, as we were attending a family wedding at Wroxeter Hotel, just around the corner. As others have mentioned, you may ...

A great location, but lack of information

The site was easy to find. It is a field; grass is cut but not very short. It is bumpy, we hit lucky and found ground that was flat! Views of the Wrekin are ... 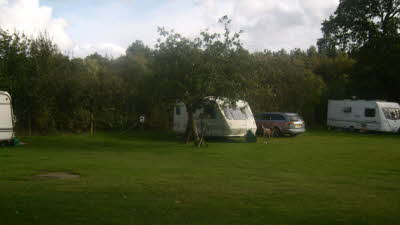