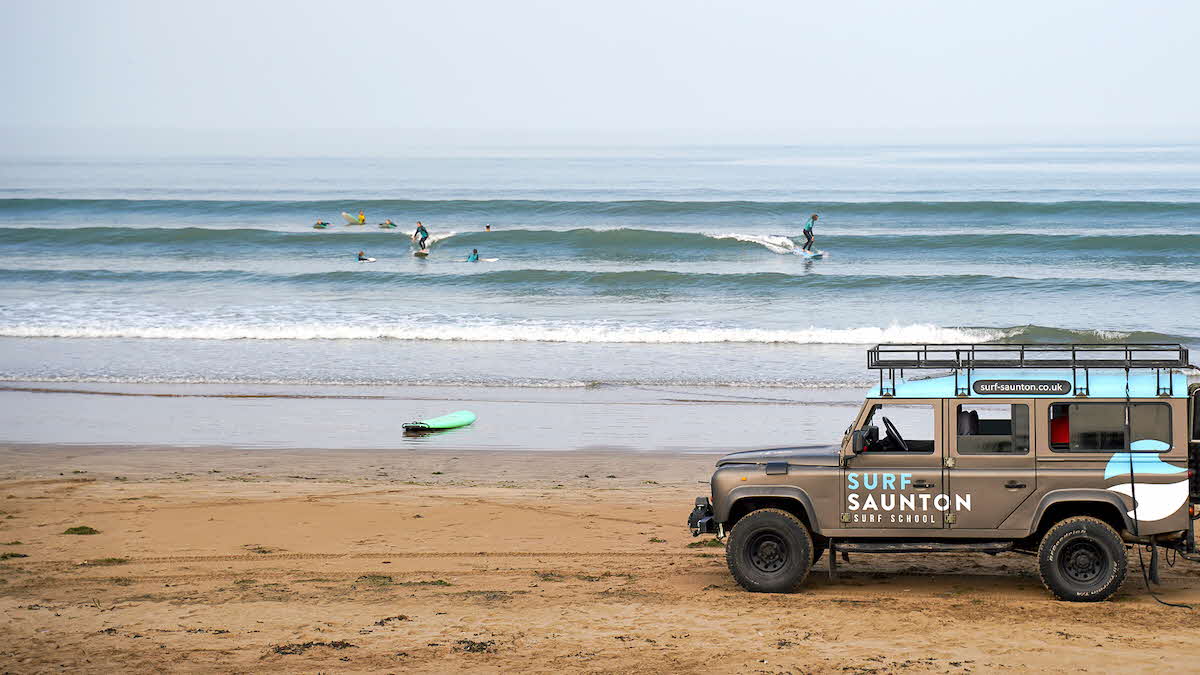 Many people will have secretly fantasised about riding a perfect wave onto an idyllic beach as the sun sets, like a scene from the cult ’90s film Point Break. Surfing is the epitome of cool, and I for one have always fancied being part of the in-crowd. The only – and fairly major – problem is that previous attempts at the sport have ended with me looking like the complete opposite of Patrick Swayze.

There is nothing remotely stylish about scrambling awkwardly onto your board, wobbling around for a few seconds then tumbling into the sea, emerging coughing and spluttering. That pretty much describes my technique when I made a brief but concerted effort to become a surf dude while travelling around Australia 25-plus years ago.

Considering I am now approaching my 50s, I’m not sure why I felt the need to give it another try. As I stride across the beach at the start of my two-hour beginner session with Surf Saunton, my expectations are realistically low. The best I’m hoping for is to emerge with some pride intact.

The fact I have my two daughters with me – Megan, 15, and Beth, 12 – makes things easier as I can pretend that I’m doing it for them. But what if they’re better than me? The shame!

Getting our feet wet 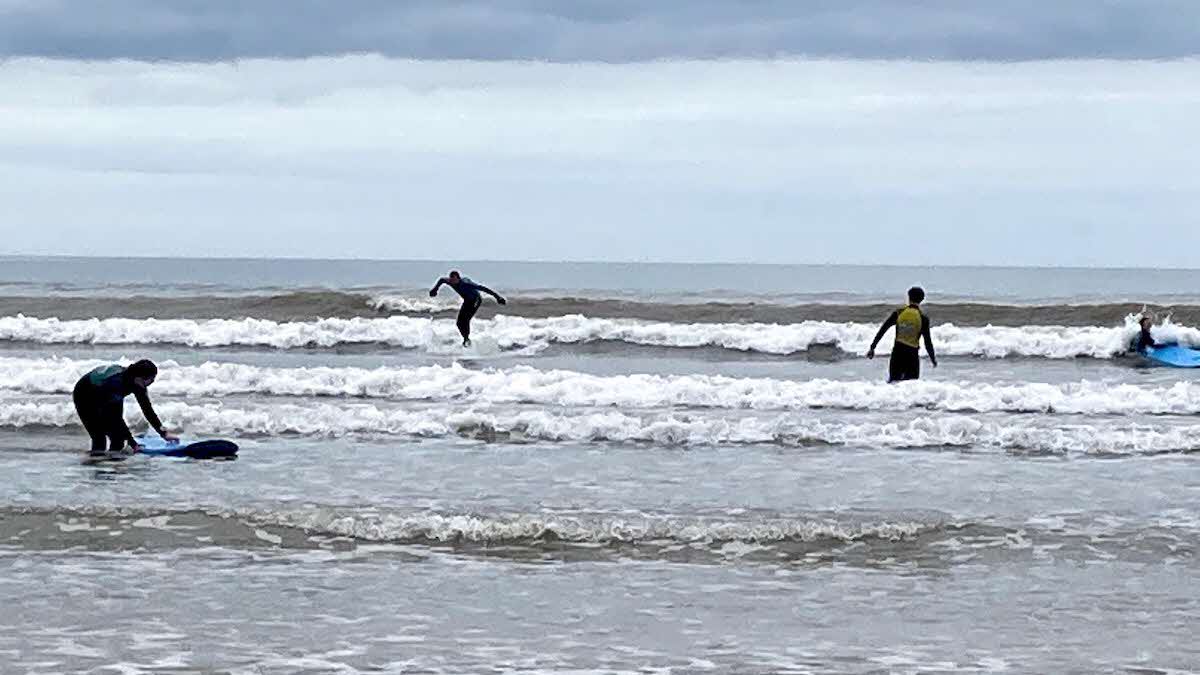 Having driven the short distance from our base at Willingcott Club Campsite, I park the motorhome at Saunton Sands on the North Devon coast with some trepidation. It is early morning, but this stretch of coastline is popular with surfers, so the car park is already half-full with campervans and people pulling on wetsuits or waxing their boards.

Megan and Beth are also slightly anxious about what the next two hours will hold, but we are put at ease as soon as we pop our heads into the Surf Saunton hut. There, we are greeted enthusiastically by our instructor, Jamie, who assures us that we’ve picked the perfect day as the waves are ideal for beginners – not too big, and rolling into the shore in neat lines.

We pull on our wetsuits, boots and gloves – it was mid-April and the water had been pretty chilly when we’d swum the previous day – but decline the rubberised balaclavas. We are striving for cool, after all!

We each pair up with a fellow surf rookie to carry two boards between us towards the sea. As the tide is out this proves quite a vigorous warm-up, but does give me the chance to discover that my surf partner lives just down the road from me. She explains that the pandemic and subsequent lockdowns have motivated her to try new things, and she has enrolled in a week of lessons in a bid to become a bona fide surfer.

The first step to achieving that goal is to go through the basics on the sand. Jamie explains the ideal position to lie on the board – feet dangling slightly off the end – and the best way to paddle to build enough momentum to actually catch the wave. The key to success, though, is learning to spring from lying to standing without losing your balance. As we are beginners, Jamie advises us to do this in stages by first going up on our knees and then jumping to our feet, making sure to position our feet in the right places and at the correct angles. Ominously, my first attempt at this sees me wobble onto the sand, but after a few more tries and some minor adjustments from Jamie – front foot at 45°, back foot at 90° – we are ready to head into the sea.

We wade out through the surf to a spot where we can prepare to catch our first wave. Although there are about a dozen people in our two groups – one ‘beginners’ and one ‘improvers’ – the beach is large at Saunton and there is plenty of room for us to spread out. 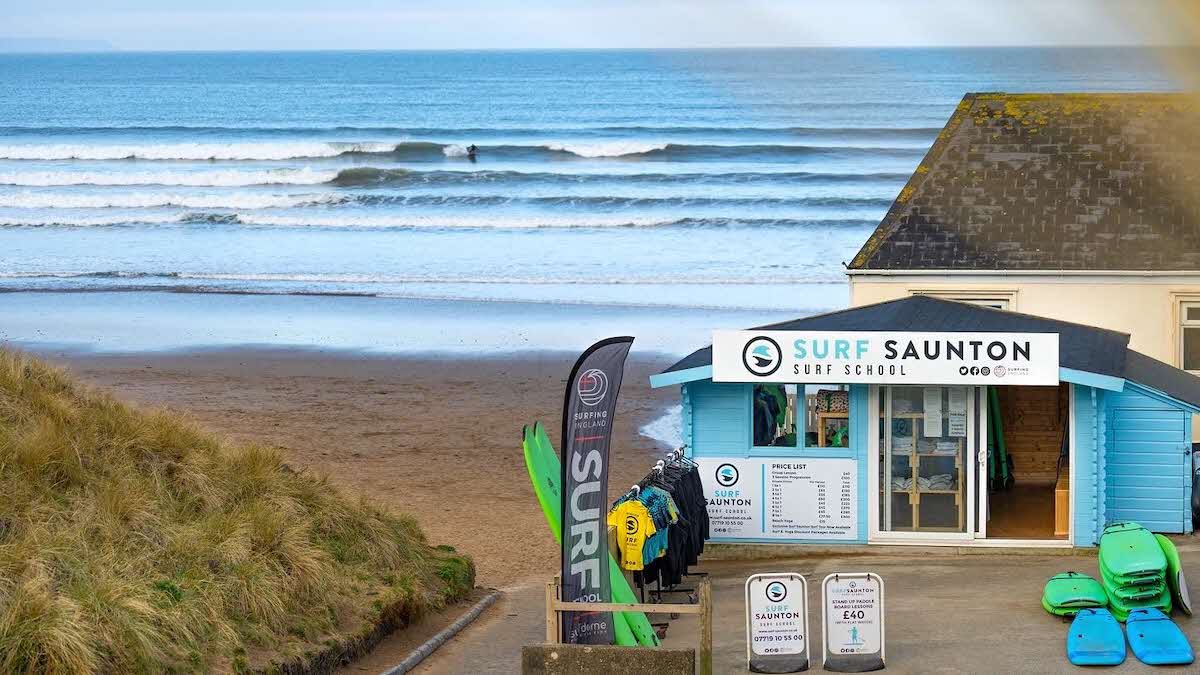 Jamie alerts me to a suitable wave heading our way and urges me to clamber onto my board and begin paddling. It happens so quickly that I don’t have time to think about all the things I might be doing wrong. The next thing I know I’m actually standing on the board and riding the wave for what feels like minutes... but is in reality about 15 seconds.

I hear the whoops from Jamie as I finally lose my balance and plunge into the sea, emerging with a massive smile on my face. I probably didn’t look particularly cool – the photo evidence taken by my wife from the beach later proves this fact – but I have achieved my goal at the very first attempt.

Surfing is definitely addictive, and even this minor taste of success made me rush straight back out to try again. Amazingly, I stood up even longer on my next wave and felt quite proud when Jamie labelled me a natural!

Megan and Beth found it a little trickier, but Jamie was determined to get them standing up. After some minor tweaks to their stances and a helpful push to ensure they catch the wave, they both hit the jackpot.

The two hours fly by, and we are all disappointed when it is time to leave the water. There’s some relief too, though – surfing is pretty tiring and my performance has noticeably started to dip towards the end.

We are buzzing for the rest of the day, scrolling through the photos of us riding waves – the kids obviously posting them on social media – and chatting about how much fun it was.

It can be tricky finding activities that the whole family will enjoy when you have teenagers, but surfing was definitely a winner. And, as I proved, you are never too old to give it a try. 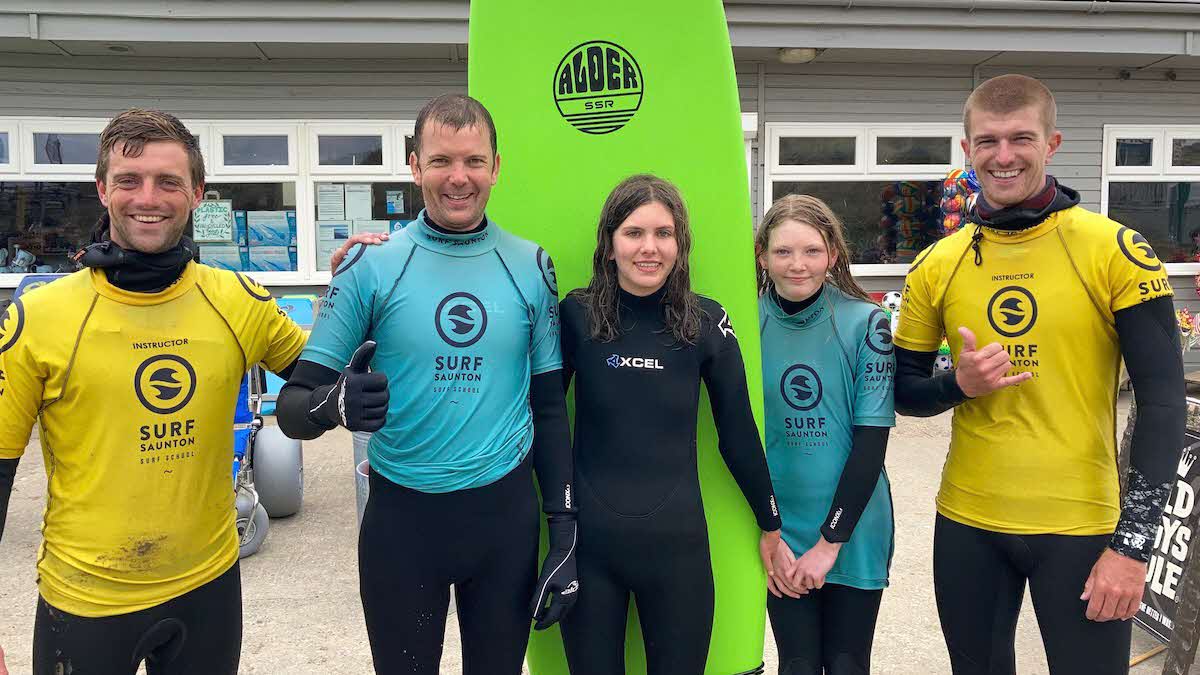 Yoga on the beach

Surf Saunton also offers yoga sessions on the beach at Saunton Sands. Run by experienced yoga teacher MJ Robertson, the aim is to help surfers improve core strength, flexibility and focus, but are open to anyone keen to take part in a beautiful and unusual outdoor setting.

Sessions during the remainder of 2022 take place at 9am every day in July and August, and at  9am on Saturdays and Sundays in September and October. They include meditation, breath work and a blend of traditional yogic techniques for all ages and abilities, with a special focus on poses that will enhance surf skills. (I attended with my yoga-obsessed daughter Megan and was able to do most of the exercises.)

There is something magical about practising yoga tucked between the sand dunes on a picturesque beach with the sound of waves hitting the shore in the background.