What type of outfit is best for you?

Finding it hard to choose between a caravan or a motorhome – or even thinking of trying out a folding camper? Helen Stockton has toured in them all and gives a lowdown of their pros and cons to help you decide.

I’ve been holidaying in recreational vehicles for most of my life. As a child we had a second-hand caravan in which the height of luxury was an indoor loo, gas lights and running water powered by a foot pump. Fast forward a few years and, with a young family of our own, we bought a folding camper, which gave us many years’ great service.

When the children were grown we switched to a small couple’s caravan, eventually trading it in for the two-berth motorhome that we use today. We’ve enjoyed every one of our investments, but all options have their pros and cons, some of which may not be immediately obvious. So, if you are starting out, considering a change or just curious, here’s my take on whether to fold, tow or motor. 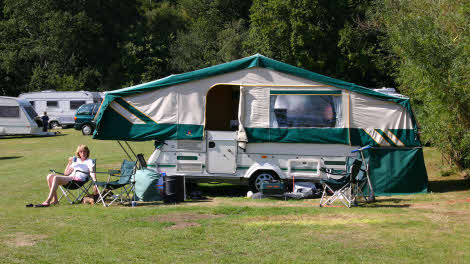 A folding camper comprises the bottom half of a rigid caravan and a canvas upper that folds out to create a larger space. Unlike a trailer tent, the accommodation is completely off the ground (unless you choose to erect an awning, which fastens onto the side). The base contains the same equipment as a caravan (fridge, cooker, heating system, loo, under-seat lockers), while the above-base furniture (wardrobe, shelves and hand basin) folds out. We needed something comfortable for a family of four plus a small dog, and this ticked all the boxes.

There is no compromise on quality in a modern folding camper. The specification for our Pennine Pathfinder Deluxe, owned from new, equalled many caravans, plus it had the advantage of fixed beds for all. It also boasted generous internal space, and had a large under-bed storage tent, accessible from outside, which was perfect for outdoor gear and the dog, even without the huge awning.

It was relatively cost-effective to buy and, as it fitted in our garage, we didn’t have to pay for storage. It was easier to tow than a caravan, thanks to its smaller size and the clear rear view behind the tow car, and it offered less wind resistance, making fuel economy better too. 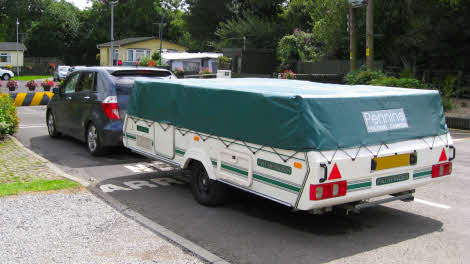 We towed it happily with our regular family car and, once on site, there were no concerns about vehicle theft as would-be crooks would have had to pack it up first! One of the most common queries from others was whether it leaked. It didn’t – ever – and the canvas was very durable. After eight years of family use, we sold it to new owners, who were delighted with its condition.

The main disadvantages for us were the limited number of manufacturers, models and dealers from which to choose, as well as the time and energy needed for setting up. While it only took 10 minutes or so to unfold and secure the canvas, about another hour was needed to set out the furniture, liner, inner tents, under- bed tent and curtains – and then there was the awning. Packing was tricky (because there was no wardrobe in which to store clothes before we were set up on site), while if the camper was packed away wet at the end of the holiday, it had to be unfolded and dried off at home.

The canvas upper meant that there wasn’t a shower or overhead lockers, although the loo and handbasin were standard caravan quality. Security could be an issue because, although the door locked, the canvas upper was obviously less secure. And, finally, it wasn’t really an all-year option as, even with heating, it could be a bit chilly at either end of the season. It was, however, great fun, and we loved it! 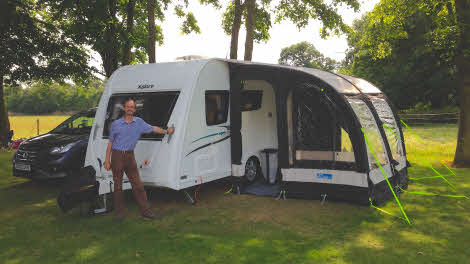 Our next purchase was a small caravan – an Elddis Xplore 304 – which we had from new. It offered more inside storage space thanks to overhead lockers, and also had a shower. It was easy to pack before we went away, more secure on site and it allowed us to extend our holiday season. As with the folding camper, if we wanted to go out for day trips while pitched on site, we just took our car.

The main drawback was towing, which was trickier and less economical than with the folding camper. I didn’t feel confident towing, and my husband found it relatively stressful on busy roads. It also required a bigger car than we would ideally have chosen for just the two of us.

If you are not prepared to pay for storage, keeping a caravan at home can be difficult as it takes up a lot of space on a driveway (additionally, its sudden absence from outside your house rather signals to the world that you are away). While it was quicker to set up than a folding camper, it still took longer than we’d imagined. 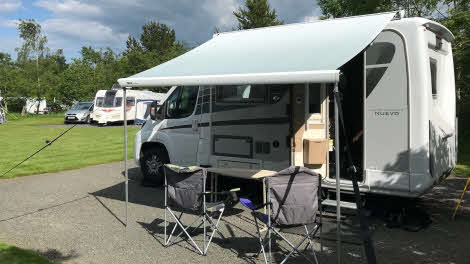 Which brings us neatly to our current vehicle – a two-berth Auto-Sleeper Nuevo EK motorhome. Again, we bought this as new, which immediately presents the most obvious drawback – price. Motorhomes are the most expensive option of the three presented here, even if you consider the cost of running a larger car for towing.

A motorhome is more expensive to purchase and run, requiring tax, insurance and MOT, as well as habitation and vehicle servicing. Due to its weight, we are reluctant to pitch on grass unless it is the height of summer – we got stuck once and it’s not an experience we are keen to repeat! Every time you go out, you have to pack it up and drive it off site (although this only takes 10 minutes) and, even when you have a small motorhome like ours, you need to be sure that where you are heading has suitable parking. 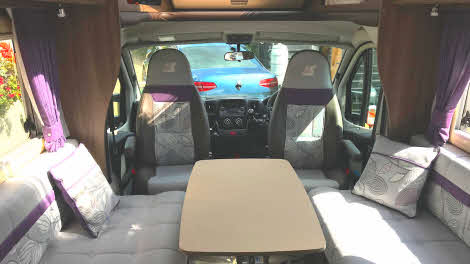 However, it is the easiest vehicle to set up and the water and waste water are held in tanks so there is no wheeling of containers backwards and forwards. On our inaugural trip, we drove on to the pitch, connected to the electrical hook-up, and then looked at each other – there was very little else to do! We also both feel confident driving it, so we can share the burden on longer trips. It is great all year around, and we have used it right through the winter. While expensive at the outset, motorhomes tend to hold their value well and the second-hand market is fairly buoyant.

So which is the best? There really isn’t a simple answer. It depends on many things: budget, your fitness and energy, preferred type of holiday and how the vehicle will be stored. We have enjoyed all three options, although I think we both have a sneaking fondness for our folding camper days, when the children were young.