A glorious tour of the West Midlands The 17th Century Chesterton Windmill, near Lemington Spa, is one of many striking landmarks to be enjoyed on this tour                      Karl Redshaw/Alamy

The cross hair of this tour focus unerringly on the heart of England. The pulse of the country beats in this central region, with its castle-building history, industrial might and countryside charm. From the splendour of Warwick Castle to the honey-stone villages of the Cotswolds and the dynamism of Birmingham, this Midlands triangle encapsulates the past, present and future.

Our journey starts on a farm close to Leamington Spa, where immaculately kept pitches at Harbury Fields Affiliated Site serve up relaxing rural views. A quick glance at the road atlas reveals attractions in every direction, from Oxford and its dreaming spires to the screaming engines of Silverstone, via mighty Birmingham, theatrical Stratford-upon-Avon and magnificent Blenheim Palace.

The Shakespeare Inn, a two-minute drive up the road in Harbury and with a helpfully large car park to accommodate motorhomes, serves up a fine decision-making pint. Warwick Castle is an easy choice for a first port of call.

Cinematic in scale and atmosphere, the castle is pure Hollywood, from the bowman firing arrows across the dry moat, to the imposing towers and crenellated walls. A narrow, claustrophobic staircase leads up to the battlements, from where spectacular views open across Warwick and the surrounding countryside. Armoured knights, people in medieval dress and raucous peacocks vie for attention in the grounds, while the state rooms have fast-forwarded a few centuries to focus on a high society ball, hosted by Daisy, 5th Countess of Warwick, in 1895.

It’s difficult to think of another attraction that offers so much to such a wide age range of visitors, from a ‘Zog’ dragon trail for toddlers and ‘Horrible Histories’ maze for older children, to the gardens, parkland and castle for everyone. All generations converge at the stunning falconry display, a show with its own fictional narrative and music, set against the backdrop of the River Avon. Warwick Castle is an easy drive from the next site on this tour, Chapel Lane Club site, which sits just minutes from the M42 at the southern gateway to Birmingham. It’s hard to imagine that England’s second city is five miles to the north; deer and foxes roamed the site during lockdown. Situated right in the middle of the country, the site is a popular stopover point for Club members heading in any direction, but to treat it as a transit location seems a travesty.

Chapel Lane has attractions on its doorstep, including the Transport Museum right next door and Beckett’s Farm Shop (10% discount for Club members) a 10-minute stroll away, plus the countless attractions of Birmingham within a short bus or train ride. The huge NEC arena is home to events such as Crufts and the Motorhome & Caravan Show, while next year the city will host the Commonwealth Games. Other permanent attractions include the retail heaven of the Bullring and Cadbury World.

The famous Morgan sports car factory being is located a few minutes away from my next stop at Malvern Hills Club site. Guided factory tours show off the traditional craftsmanship that goes into each of the hand-built cars, while a fleet of Plus Four models are available to hire for a full day’s adventure (£235). It’s a golden chance for caravanners to forget MTPLM, kerbweights and jockey wheels, and surrender to the timeless elegance of these beautiful cars.

Malvern Hills Club site delivers exactly what it says on the tin, with the famous hills that inspired the likes of composer Edward Elgar providing a backdrop. From the highest point, at Worcestershire Beacon, there’s nowhere closer to the sky due east until the Urals in Russia. In terms of bang for your buck, the panoramas from the tops of the Malverns massively over-deliver on the effort required to scale the slopes. 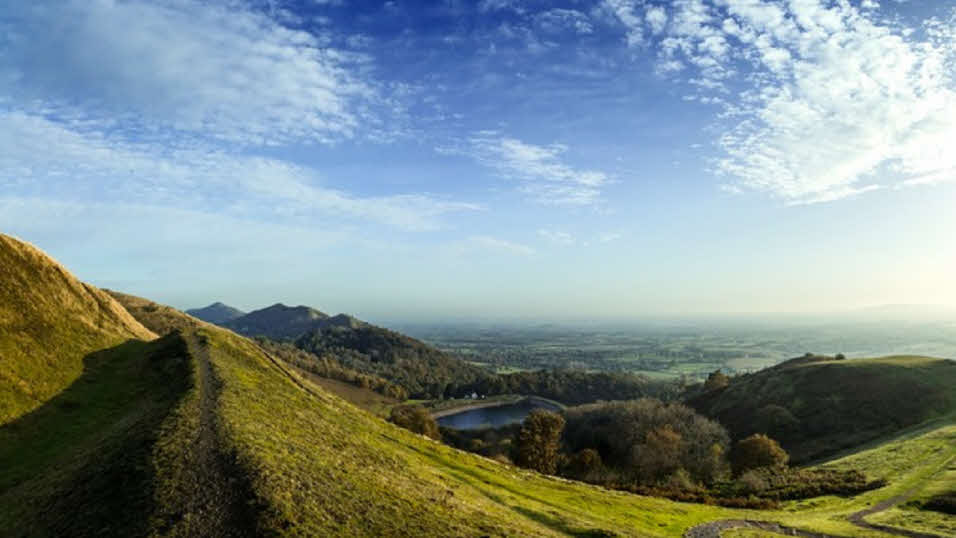 From the Club site it’s a fair old trek to the hills themselves, but there are also exceptionally fine walks on your doorstep. There’s also a handy bus service, about 400 yards away, that heads to the cathedral city of Worcester in one direction and to Upton-upon-Severn, home of Britain’s biggest free blues festival (scheduled for July 2022), in the other.

Jackie Locke, owner of Rails End Nursery CL, could be excused for singing the blues after deer devoured the trees and rabbits nibbled the flowers that she planted on a site that wins rave reviews for its tranquillity, huge pitches and friendly welcome. The large, grassy paddock lies beyond a terrace of glasshouses, with one particularly good pitch tucked behind a hedge on a large plot of its own. The information shed deserves a mention, too, with hook-up cables, camp chairs, games and books all freely available to borrow.

Barely 20 miles to the east, Suakin CL is perfectly placed for visiting Stratford-upon-Avon. Campers need to be self-sufficient as there are no electric hook-ups on site. Suakin is only about a mile from Anne Hathaway’s Cottage, the thatched Tudor house where Shakespeare wooed his bride, and it’s an easy walk or bike ride across the racecourse into town (or just a seven-minute bus ride). 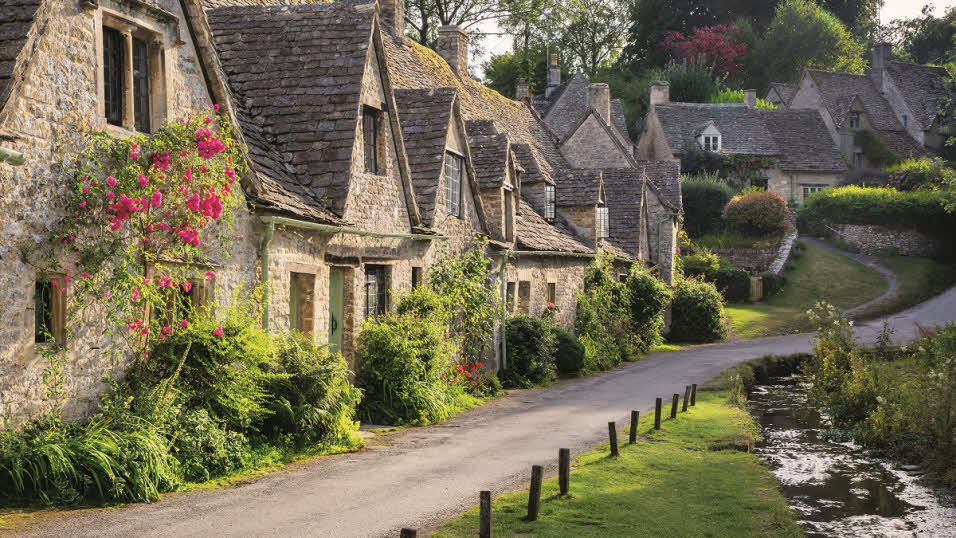 Shakespeare-related sites dominate Stratford, but there are plenty of other attractions to enjoy. Stratford Butterfly Farm provides a tropical escape from poor weather while the MAD Museum (Mechanical Art and Design) exhibits unusual contraptions that cleverly combine engineering with artistic flair – think Wallace and Gromit-esque inventions. The two green gremlins, one suspended Mission Impossible-style, defacing a portrait of Shakespeare with white paint will delight visitors with unhappy memories of double English classes.

The border between Shakespeare Country and the Cotswolds is blurred but an easy drive south sees the architecture swiftly transform into the honeyed limestone for which the area is famous. My destination is the Club site at Moreton-in-Marsh, one of the loveliest towns in the area, with a broad high street and attractive shops (Club members enjoy a discount at Moreton Wine Merchants – just saying!). The site has something for everyone – glamping pods, safari tents and yurts, as well as a parade of A-boards advertising the food businesses that visit: a barbecue truck; a wood-fired pizza wagon; fish ’n’ chips; and a street food van.

A gate at the back of the site opens directly onto the Monarch’s Way long-distance path. Turn right and it’s a 10-minute saunter into the heart of Moreton-in-Marsh; turn left and it’s a mile to the fabulous Batsford Arboretum. This century-old park features around 1,300 different species of tree, with almost 3,000 specimens labelled to help identification. The kaleidoscopic variety of leaf colour and shape is mesmerising, and I instantly regret missing the spring blossoms of the Japanese flowering cherries (designated the ‘National Collection’) and make a note to revisit later in the year for the riot of autumn hues. A flat, easy track through the heart of the arboretum makes access easy for all, with steeper trails diving off left and right to explore the woodland.

There are further far-flung influences on the other side of the A44, where Sezincote brings a surprising slice of Indian architecture to the area in the form of a 200-year-old Mogul palace, complete with a green, oxidised-copper onion dome. Signposts along the A429 south to Cirencester (the full stop of this tour) point to the achingly pretty villages that give the Cotswolds its distinct character – the Slaughters, Bourton-on-the-Water, Bibury – and all are worthy of a diversion. Cirencester itself deserves exploration, too, the colourfully rendered buildings of its high street giving way to a twist of medieval back streets. The town is located at the junction of the Fosse Way and Ermin Street, two of the most important arterial roads of Roman Britain, and in its heyday was the second largest walled town in the country behind London.

The newly re-opened and revamped Corinium Museum celebrates this Roman past, while on the outskirts of the town centre are the huge (and free-to-visit) earthworks of the second-century amphitheatre, capable of holding 8,000 spectators.

Cirencester Park is a popular Club site, but with its 211 pitches scattered over a spacious 35 acres it feels calm and quiet. The site is tucked into the corner of the eponymous Cirencester Park, part of the Bathurst Estate, where paths and rides radiate in all directions.

Three miles to the south-west, the Thames Head Inn stands close to the source of the mighty river and not far from here you can pick up the start of the Thames Path national trail, which eventually meets the sea on the far side of London. For now, though, there’s a glimmer of blue sky, a table in the Inn’s garden and a pint of local ale to toast a fascinating tour through the heart of England.