A tour packed with eastern promise

Jonathan Manning visits country houses, feasts on sumptuous pork pies and experiences the bright lights of Skegness on a seven-site tour through the East Midlands to the Lincolnshire coast. 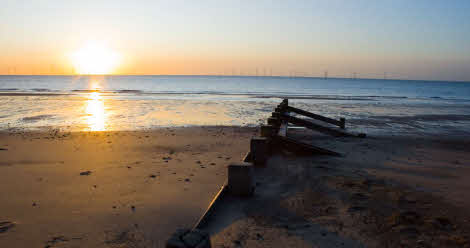 Even on market days the bustling streets of Melton Mowbray seem an unlikely origin for the phrase ‘paint the town red’. But this Leicestershire jewel hit the headlines in 1837 when the Marquess of Waterford and a handful of his aristocratic friends spent a day at the races and got so drunk that the local toll keeper refused them entry to the centre. Incensed, the revellers boarded up the toll keeper in the toll house, stole pots of red paint and proceeded to redecorate the town’s doors and windows. Justice eventually prevailed as each of the merrymakers was fined £100.

Touring never fails to unearth such nuggets of ‘pub ammo’, and the Melton Carnegie Museum is full of them, like the story of Johnnie Johnson, a Melton man denied entry to the Auxiliary Air Force when his interviewer discovered that Johnson didn’t hunt. He was finally called up in 1939, trained to fly a Spitfire and subsequently shot down more enemy planes than any other pilot.

The town has forged an enviable reputation as a foodie capital, famous for its pork pies – made with chopped (not minced) pork and hot water crust pastry – and its Stilton cheese. Dickinson & Morris’s Ye Olde Pork Pie Shoppe is the place to go for a pie (there’s even a Stilton-topped version), and I devour it by the lake in Melton Country Park as I plan out a touring itinerary that resembles Nike’s iconic swoosh: a short downtick from Leicestershire to Northamptonshire followed by a long upward arrow to Lincolnshire’s sandy coastline. 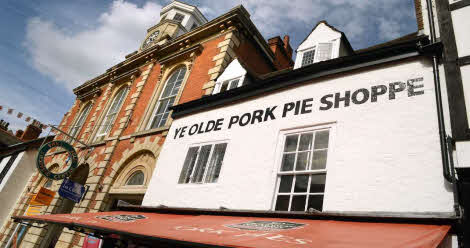 There are more mouthwatering products on sale at Hill Top Farm Shop Certificated Location (CL), a mile walk north of Melton. Opened last year, the five-pitch grass site has since been joined by a lavishly-stocked and licensed farm shop as well as  a café, alongside a well-equipped play area.  With views over grazing sheep, pet donkeys and goats in the neighbouring field, it would be easy to lower the steadies and stay on site for a little longer.

It’s a wrench to leave, but with supplies of local delicacies safely stowed on board, I head south. I make a short diversion to visit Foxton Locks, a staggering piece of Victorian engineering on the Grand Union Canal, where 10 back-to-back locks create a staircase for boats to climb or descend. A volunteer lock keeper tells me it takes about 45 minutes for a boat to pass from top to bottom and vice versa. The towpath offers the perfect vantage point for this mechanical masterpiece, while two pubs, a café, shop and large car park provide the ingredients for a leisurely afternoon watching people mess about in boats. 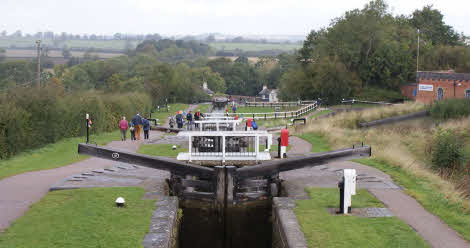 Foxton Locks is a fascinating example of Victorian engineering

I push on to Bunkers Hill Farm CL, which sits close to the highest point in Northamptonshire; on clear days the views can stretch 35 miles to the north. Set on a 200-acre pedigree Suffolk sheep farm, the CL of the Year winner is also a convenient stop-over site, although it would be a shame to rush through: there’s a golf course on the doorstep, Northamptonshire’s reigning community pub of the year is only a mile away in Thornby, and Coton Manor Garden, the Nation’s Favourite Garden (as voted by The English Garden magazine and National Garden Scheme) is just a little farther on.

Heading east, it’s not long before the road passes Kirby Hall, a striking 17th-century stately home run by English Heritage. The house has perfectly preserved walls, but is missing most of its windows and roof, giving it a spooky appearance. In normal times the house and its formal gardens would be irresistible, but Covid-19 precautions mean tickets have to be pre-booked, so my impromptu visit means I can do no more than gaze over the garden walls. 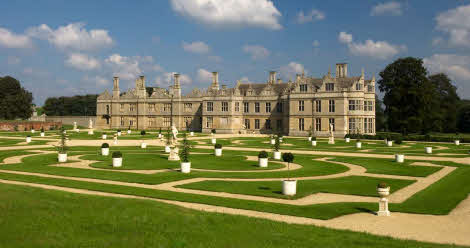 Twenty minutes down the road I arrive at Stamford Club site, the third hill-top campsite of this tour so far. Set within Fineshade Wood’s dense curtain of broadleaf trees, the site has no shower or toilet facilities, providing the ideal, tranquil hangout for self-sufficient campers.

There are mountain bike trails in neighbouring Wakerley Woods, plus easy walking and cycling for everyone at Rutland Water. Just north of the giant reservoir is Barnsdale Gardens, forever connected with Geoff Hamilton (of BBC Gardeners’ World fame), where 38 different gardens cater for every taste. And, of course, there is Burghley House. This magnificent Elizabethan mansion, built in 1598 by  Sir William Cecil, Elizabeth I’s Principal Secretary and Lord Treasurer, generously opens its sweeping parkland for free, making it the perfect place for  a walk and picnic while the house itself is worth of half a day’s exploration. 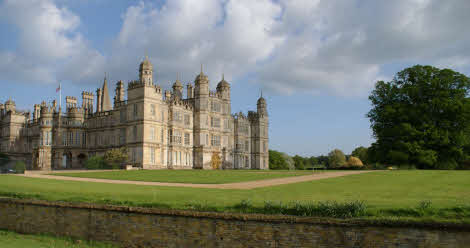 It’s a lengthy walk through parkland from Burghley House to the town of Stamford, but definitely worth the effort for the shopping opportunities, river meadows and the gorgeous Georgian architecture, much of it in honeyed limestone.

With Stamford built on the old Great North Road, it seems appropriate to  follow the A1 north to Grantham, where the Affiliated Site of Wagtail Country Park sits just to the north of former  Prime Minister Margaret Thatcher’s home town. The site’s list of visitor information and attractions is almost as long as its single-track driveway. The National Trust’s Belton House is very close by, and boasts a fantastic adventure playground, while the café in Belton Garden Centre shoots straight to number one in the charts for the best ever selection of cakes.

The site is blissfully calm, although when the peace is broken it’s shattered in dramatic fashion – the Red Arrows are stationed nearby at RAF Scampton (and due to move even closer to RAF Waddington), while Typhoons fly out of RAF Coningsby, home of the Battle of Britain Memorial Flight. Lucky campers may see the Spitfire, Hurricane and Lancaster bomber fly over. 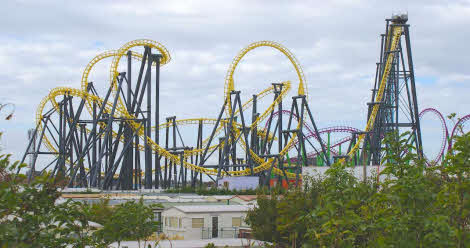 The rollercoasters at Fantasy Island theme park in Skegness

I next roll into Skegness where, even on a wet afternoon, the beach looks fantastic – miles of sand stretching northwards, with abundant space for walkers and families, and toddlers oblivious to the rain as they dig. The piped pop music and neon lights of seafront attractions do their best to spark life into the lacklustre day, but darkness is required for them to truly transform Skegness into ‘Skeg Vegas’.

Skegness Sands Affiliated Site sits a couple of miles to the north, far enough away to find peace amid the sound of waves and gulls, but close enough to offer an easy walk along the promenade into town (there is also a shuttle bus) or north to Ingoldmells. A gate leads directly to the beach, and the plumb pitches in summer are surely those on the grass paddock that look straight out to sea. In autumn, campers retreat to the hardstanding pitches.

Bidding farewell to the resort I drive north, past fleets of static caravans and the huge Fantasy Island theme park, dominated by its roller coaster, a towering tangle of scream-inducing ironmongery. The road skirts a succession of seaside resorts – Skegness, Ingoldmells, Chapel St Leonards, Sandilands, Sutton-on-Sea and Mablethorpe, each with their own character and appeal. 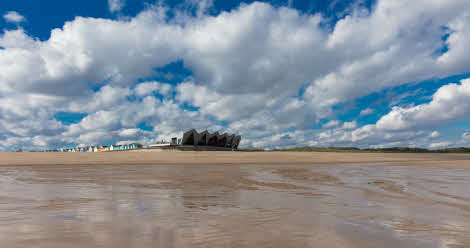 Promoting itself as a base for people who want a more peaceful holiday, Sutton-on-Sea, with its rows of beach huts and colourful flowerbeds has a slight sense of being a place that time forgot. The beach is vast, a carpet of soft sand stretching as far as the eye can see. About a mile inland, the Club site avoids even the low-key bustle of town, facing west to deliver spectacular sunsets over the flat hinterland.

The final stop on this East Midlands tour has me turning inland to The Stables CL at Maltby-le-Marsh. The tree-lined grassy paddock with a nature-rich pond is very well equipped for a small site, with men’s and women’s toilet and shower facilities as well as electric hook-ups.

Go to The Stables CL

Owner Philip Grimshaw moved here from Stoke-on-Trent four years ago, and discovered the caravan and motorhome community for the first time. “It’s changed my life, I absolutely love it, it’s such a social world,” he says.