From hedgehog rolling to the World Toe Wrestling Championships, Elizabeth Fowler discovers the quirky customs of the Peak District and surrounding area during a seven-site tour of the East Midlands. 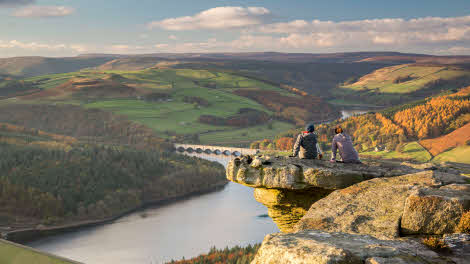 Now that sites are fully open again you’ll probably be planning your touring breaks. How about a few days exploring a part of the country that is packed with hidden treasures? Kicking off in Derbyshire, this suggested itinerary takes in the beautiful Peak District before veering south to Nottinghamshire, Lincolnshire and Rutland.

At a time when the great outdoors has assumed a whole new level of importance, this expedition across the East Midlands will be just the ticket. Whether you favour gentle strolls, energetic hikes or lengthy bike rides, there is so much to savour.This is also a region with the richest of cultural heritages, a living landscape whose inhabitants have kept alive a wealth of local customs – and invented some interesting new ones!

One of the UK’s best-known traditions is the annual ‘dressing’ of hundreds of wells in communities across the Peak District. It is thought that the decorations originally acted as a religious offering in the hope of receiving a pure and reliable water supply. The town of Buxton holds a spectacular Well Dressing Festival in July, which organisers hope will go ahead in 2021. This pretty spa town is our first ‘stop’. The Club’s site nestles within a picturesque valley with a stunning escarpment as its backdrop – a fortuitous by-product of the region’s historic limestone quarrying industry.

Buxton Club site is within walking distance of the town and you should make a beeline for the centre to see the fabulous, Grade I-listed Georgian Crescent, built in the 1780s for the 5th Duke of Devonshire as a centrepiece for the fashionable spa resort. Directly opposite the Crescent is the recently restored Victorian Pump Room and next to this you will find St Anne’s Well – a free source of the natural spring water. Why not fortify yourself with a hearty breakfast accompanied by traditional Derbyshire oatcakes (from Buxton’s wonderful Pig and Pepper bakery) and head for the hill fort-capped Mam Tor? It’s a three-mile circular walk from the National Trust car park to the summit. From here there is a superb view of Kinder Scout, the Peak District’s high moorland plateau and setting for the annual Great Kinder Beer Barrel Challenge, which sees barrel-bearing teams racing three miles over testing slopes and through notorious bogs!

Our next destination, Newhaven Lodge Farm Certificated Location, is a mere 30-minute drive away. It’s a quiet CL offering a mix of hardstanding and spacious lawned pitches in a gorgeous location beside the High Peak Trail. You may well be treated to the sight of swifts soaring above. You can walk from the CL to the Neolithic henge at Arbor Low; the circle of some 50 limestone slabs is the most important prehistoric site in the East Midlands.

It’s a short hop to the delightful village of Hartington, positioned at the northern end of the Dovedale valley. There are some splendid buildings around its square, and a pretty common with a much-photographed duck pond. From there it’s worth heading south to the sleepy village of Wetton, where the first World Toe Wrestling Championship took place in 1974.

From Wetton you can walk up to Thor’s Cave, an incredible limestone cavern that dominates this section of the Manifold Valley, and then on to the rustic moorland village of Grindon, once a staging post on the packhorse route from the copper mines on Ecton Hill to the north. If  you are there in mid-July you can usually watch the Grindon Hedgehog Rolling. While this did originally feature hedgehogs trained to race, today competitors push decorated giant fir cones using traditional besoms. Carsington Water, another short drive away, is an attractive Club site with pitches in small clearings separated by pine trees. It lies at the southern tip of the reservoir which you can walk around in about three hours (cycle hire is available too) while even on a shorter walk you’ll probably see quite a range of waterbirds.

Next on our itinerary is the estate village of Tissington, with its fabulous Jacobean hall. Tissington is said to be the first village to have dressed its wells, doing so each Ascension Day for more than 650 years. From here we head for the handsome market town of Ashbourne, which boasts cobbled streets and impressive Tudor and Georgian architecture. Ashbourne is home to the annual Royal Shrovetide Football Match – a dramatic game involving thousands of players and spectators with goals three miles apart!

You could indulge in a quad bike trek at Wild Park near Brailsford Green. With 200 acres of land boasting mature woodland, brooks, swamps, mounds and open fields, there are options for every level of rider. The ‘standard trek’ will give you an hour and a half of exciting and messy fun!

The midpoint of this tour is The Firs, a peaceful Club site with excellent facilities and beautiful views of the Derwent Valley thanks to its hilltop position. Just six miles north-west lies Cromford Mill, the world’s first water-powered cotton spinning mill. It is part of the Derwent Valley Mills UNESCO World Heritage Site, and is also home to a visitor centre, shops, galleries and eateries. You can also pay for a most interesting tour. Go to The Firs Club site

Less than two miles beyond the mill lies the picturesque village of Matlock Bath, set in a beautiful, steep-sided gorge on the River Derwent. It has been a popular resort since Victorian times, the poet Lord Byron dubbing it ‘Little Switzerland’.

From Matlock Bath you can access the Heights of Abraham – a hilltop park reached via a steep zig-zagging path or cable car. The latter offers a spectacular ride with phenomenal views. At the top there are exhibition areas, adventure playgrounds, woodland walks, 60 acres of landscaped grounds and two impressive show caverns, which you can tour with knowledgeable guides.

Heading east from The Firs, it’s certainly worth a stop to admire the distinctive Heage Windmill, which sits high on a grassy ridge providing spectacular vistas. Lovingly restored in 2002, it is the only working six-sailed stone tower mill in England. Time it right and you’ll be able to buy some of their wonderful stoneground bread flour (see heagewindmill.org.uk for details).

A small detour takes you to Greasley in Nottinghamshire, where, traditionally at the end of July, you can follow the commemorative Brinsley Coffin Walk, a recreation of the journey pallbearers would have made from the village to the medieval church nearly three miles away. These walks – often raucous affairs – were common before the 19th century when many remote communities had no church of their own.

We recommend a stay at Tophouse Farm CL which is surrounded by farmland and bordered by paddocks. If you’re here in early October, a prime attraction is the Nottingham Goose Fair, still going strong after 700 years and now one of the largest funfairs in the UK. Its name comes from the thousands of geese that were driven from the Lincolnshire Fens to be sold in Nottingham at this time of year (wearing tiny leather boots to protect their feet!). 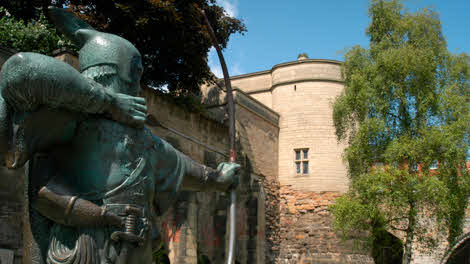 For most the city of Nottingham will evoke tales of Robin Hood. If you want to find out more about this legendary figure, Nottingham Castle is a great place to start. Reopening in 2021 following a £30-million renovation, it offers visitors the opportunity to experience an epic retelling of the Robin Hood story, learn about the city’s rebellious past and explore its amazing underground cave network.

Travelling east from Nottingham towards Grantham, our next site, Wagtail Country Park AS is ideal for keen fishermen as it boasts two well-stocked fishing lakes. It is also surrounded by good walking opportunities. You can work up an appetite on a nine-mile circular hike that follows the Viking Way for the first few miles, before passing through the village of Foston with its beautiful 11th-century church, and eventually picking up another part of the Viking Way to return to the site.

The 400-year-old Walled Gardens at Easton, south of Grantham, are a delight. Here you will find a wonderful collection of distinctive, very English gardens in the grounds of a former manor house. President Franklin Roosevelt described it as “a dream of Nirvana... almost too good to be true”.

You could finish your day with a stroll from the site to the newly refurbished Thorold at Marston, a mile and a half away. It’s a delightful pub owned by the villagers themselves. Faced with the prospect of their local watering hole being sold to developers in 2019, they got together and bought it to run as a community project incorporating a pub and a village store.

Our last suggested stop is at Rutland AS, in the smallest county in England. Offering an on-site indoor heated swimming pool, nearby Rutland Water is also a great spot for sailing, fishing and cycling.

Rutland, too, has its fair share of curious customs. Each May, in nearby Stretton, there is a Nurdling World Championship, which involves throwing old pennies into a hole in a wooden seat, while the Grainstore Brewery in Oakham holds the National Leg Wrestling Championships. If you do venture to Oakham, and happen to be a peer of the realm, bear in mind that you must give a horseshoe to the Lord of the Manor. This custom started 500 years ago and over 200 horseshoes are displayed in Oakham Castle, England’s oldest complete Norman Great Hall. 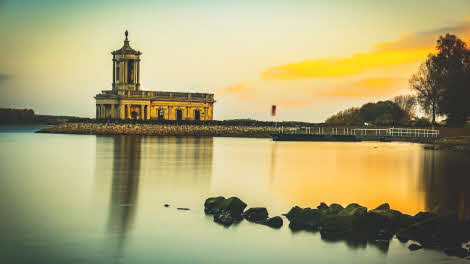 From the site it is just four miles south via the lovely tree-lined Barnsdale Avenue to a picnic spot by the horseshoe-shaped Rutland Water. Footpaths and cycle tracks link the nature reserves around the reservoir – or why not treat yourself to a fascinating guided cruise with Leicestershire and Rutland Wildlife Trust to see the breeding ospreys and other abundant wildlife?

The lake is also the setting for the fairytale Normanton Church which, during high water levels, almost appears to float. A public campaign in 1970 saved the church from destruction when the reservoir was built, and it became a tiny island with a causeway connecting it to the shore.

As we hopefully begin to get back to normality, this is a good time to properly explore the wonders of our own country. The East Midlands is not only a great place to enjoy the incontestable benefits of being outside, it’s also the perfect region in which to experience some of the UK’s many quirky and extraordinary traditions.