Step back in time in East Anglia

Jonathan Manning unearths a variety of treasures on a seven-site tour of historic East Anglia. 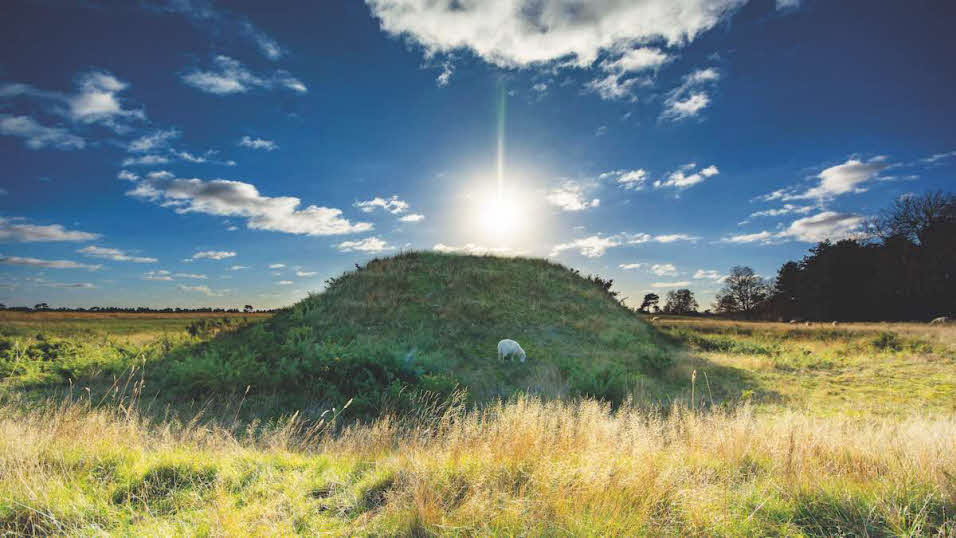 It feels inappropriate, even rude, to laugh in the middle of an ancient burial ground. But standing at a viewpoint overlooking Sutton Hoo, it’s impossible to stop a grin spreading across my face. The grassy mounds below form one of the most important archaeological sites in the UK: in 1939 a dig unearthed the treasures of an Anglo-Saxon king, dated to about AD 625 and most likely belonging to King Rædwald of East Anglia.

His body was placed in a ship, along with gold, garnets, swords and shields – passports to the afterlife, perhaps – and dragged a mile or so uphill from the River Deben. A remarkable armoured face mask that was uncovered – now on display in the British Museum, London – has become the dominant image of Anglo-Saxon Britain.

This fascinating history prompts me to wonder what a modern-day equivalent would be. Could a caravan or motorhome, filled with 21st-century treasures, serve as a fibreglass casket for one final tour? The thought makes me smile. The hilly heathland of Sutton Hoo’s 255-acre estate offers a choice of attractive waymarked trails, and later in the evening I’ll snuggle into a deckchair with a blanket to watch the recent film, The Dig, at a temporary outdoor cinema in the grounds of the site. The movie, starring Ralph Fiennes and Carey Mulligan, brings the excavations to life in a story of curiosity and social class, set against the rumble of the impending Second World War.

As King of the Angles, Rædwald would have ruled a region that corresponded loosely to today’s Norfolk, Suffolk, Cambridgeshire and Essex, the first three of which form the backdrop to this East Anglian tour.

It starts in the heart of the Fens at Fields End Water, an Affiliated Site with neat pitches and three well-stocked fishing lakes, as well as four funky glamping pods each with stove, underfloor heating and toilet – ideal for tourers wanting to bring friends and family.

By 10am, the small outdoor café by the top lake is serving tea, coffee and breakfast baps to fishermen, their gazes fixed on floats and rod tips in the morning light, while dragonflies dance in the reeds.

Campers and brothers-in-law Darren Ward and Douglas Battersby offer a quick ‘quality or quantity’ guide to the two more established lakes: The Pool offers all-day action, while The Pit holds the prospect of bigger fish but less frequent catches.

“The main lake has carp up to 27lbs and plenty of 20-pounders, and we’ve also got barbel, chub, roach and perch,” says Charlie Boughton, owner of Fields End Water. He estimates that about 60% of campers use the fishing lakes, although few are waterside from dawn to dusk; others appreciate the opportunity to relax in this peaceful setting or explore the local area. “We encourage people to go to Ely, with its lovely cathedral, river, nice parks, cafés and restaurants,” says Charlie.

Finding Ely is easy in this flat landscape, the giant cathedral rising above the surrounding Fens. Dykes and drainage ditches divide the landscape into geometric shapes, the water changing from dull pewter to shimmering silver whenever the sun breaks through. It’s an epic skyscape with only the occasional tree or wind turbine interrupting the horizon. It’s wise, though, to pay attention to the roads, which have in places been deeply rippled by subsidence, and can be a challenge when towing.

From Fields End Water we venture farther into East Anglia and towards the Suffolk coast. White House Beach, at Kessingland, is a site of two halves: 24 pitches look directly onto the vast shingle beach, while the others hunker down on the opposite side of the road, sheltered from the blast of the North Sea winds. 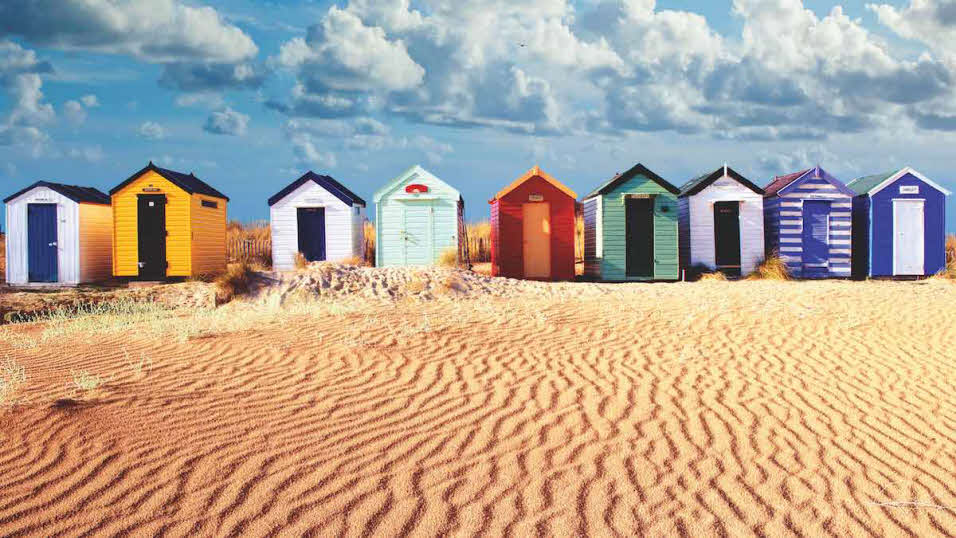 There’s a fish and chip shop, café-restaurant and pub within a couple of hundred yards of the site, while local buses head north to Lowestoft and down the coast to Southwold, enabling motorhomers to park and stay put throughout their holiday. Assistant Site Manager Simon Green jokes that walkers could turn right from the site along the England Coast Path and come back from the left, having circumnavigated the country, “although perhaps not within a maximum three-week stay!”.

Feeling culturally virtuous after visiting Sutton Hoo, I decide to treat myself with a tour at the Adnams Tours & Experiences Centre, the brewer dominating Southwold like Shakespeare in Stratford-upon-Avon. Covid-19 has limited access to the full alchemy of the brewing process, but a generous beer-tasting session guides our small party through the hops, malts and International Bitterness Units (enthusiasts apparently love discussing IBU scores) of Adnams ales.

Sampled one after the other, the range of flavours is so wide it’s hard to believe they are all beers. While a couple can stay in their casks as far as my tastebuds are concerned, the Kobold lager and Ghost Ship pale ale make me rue the fact that I’m driving. Happily, the 0.5% version of Ghost Ship is also particularly good.

Pointing north, I leave Suffolk behind and head into the waterscape of the Norfolk section of the Broads. With no hills, it’s hard to gain any type of perspective on this national park of lakes and rivers. Amazingly, the shallow lakes are man-made, originally dug as pits for peat before they were claimed by a rising water table, creating a natural world that is a haven for a quarter of Britain’s rarest species, including the crane, bittern and marsh harrier.

Lyn Robson, Site Manager at Norfolk Broads Club Campsite, says the best way to explore is by boat, adding that many Club members bring their own canoes and kayaks, which they launch at Ludham Bridge, a short stroll from the site. “The quietest place to go to hire a boat is Potter Heigham on the River Thurne, which leads to Hickling Broad; bigger boats can’t get under the bridge,” say Lyn. 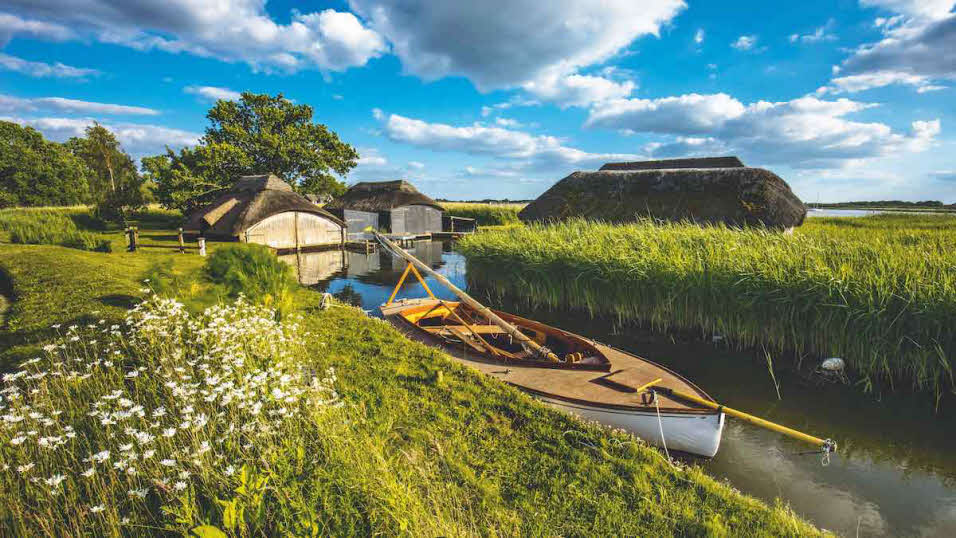 Boat houses at Hickling Broad, the largest of the broads

Hickling is the largest of the broads and, from its shore, appears endless. I’m eager to see the cranes that started nesting here in the late 1970s, but even though the birds grow to well over a metre in height, they remain elusive. Upon further research, I make a mental note to visit the Stubb Mill viewing platform in the winter to watch them fly into the reeds at dusk each evening.

For landlubbers, there are three different walks direct from the Club site, including a circular trail to the ruins of St Benet’s Abbey, a remote former monastery on the River Bure, where free guided tours take place on Wednesdays, Saturdays and Sundays during the summer.

A few miles to the east, a climb to the top of Horsey Windpump delivers one of the few far-reaching panoramas in the area. The original windpump, employed to drain the land, played its part in taming an area which was so desolate and lawless in the late 18th century that it was known locally as Devil’s Country. Legislation eventually allowed for the land to be drained, and farming replaced flooding. A sign on the tearoom wall marks the former height of the sea; today, it reads ‘tea level’, not ‘sea level’.

Horsey means ‘Horse Island’, a throwback to the time when these fields provided a stud or grazing area for horses. These days, seals defy the elements, congregating in large groups at nearby Horsey Gap, where a viewing platform provides good odds for nature watchers.

Only a few miles in from the coast, Bush House Farm Certificated Location (CL) offers a blissfully quiet basecamp for exploring the area, with only owls and the whinnying of ponies to break the peace, plus the promise of The Harnser pub just a mile’s walk away. No wonder there’s a huge number of repeat bookings.

Life is a lot busier along the North Norfolk coast, where two summers of staycations have turbo-charged Cromer’s renaissance. The childhood quote from a holidaying Winston Churchill, embedded in the promenade, that reads, “I am not enjoying myself very much”, looks increasingly out of place. Cocktail bars and cafés have opened, the rejuvenated end-of-pier show is winning rave reviews, Banksy has recently painted a mural, and there’s a thrilling air of optimism in the town. Even the ice creams are homemade at No1 Cromer on the sea front, where salted peanut butter and rhubarb and custard sit alongside traditional favourites.

Just a couple of miles west along the sandy beach sits Incleboro Fields Club Campsite, where the highest pitches enjoy arguably the finest views of any on the Club network. Set on a hillside and backed by woodland, the pitches gaze out to sea and the whirling blades of an off-shore windfarm. It’s a popular site with 241 pitches, but its wooded layout and multiple terraces across 21 acres mask its busy nature and amplify its tranquillity. 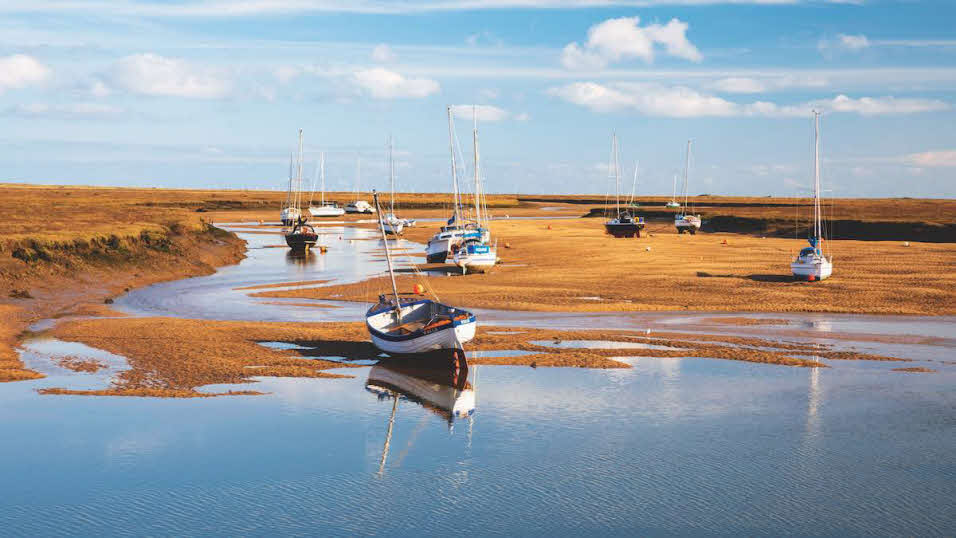 Its size does bring advantages when it comes to facilities, and not just in the four toilet blocks. Visited by fish and chip and Belgian waffle vans, and with a golf course, café, hotel, Thai takeaway and the superb Rocky Bottoms seafood bar within walking distance, Incleboro Fields has the feel of an all-inclusive site.

Family tradition dictates a visit to the neighbouring Hillside Shire Horse Sanctuary, where the gentle giants graze serenely in the pastures alongside rescued horses, ponies, donkeys, sheep and goats. It’s rewarding to see hundreds of contented-looking animals whose former lives were full of neglect and cruelty.

Griffon Barn Paddock View CL, a working farm in the heart of the Norfolk countryside, is home to two rescued horses from the Redwings Horse Sanctuary. But it’s three pedigree Ryeland sheep that steal the show, woollier and cuddlier than teddy bears. This new CL is soon to have a dash of luxury, the owners having plans to install a wood-fired sauna.

Pointing the bonnet west, I head to the final stop of my tour, The Sandringham Estate Club site. Nestled in woodland, it’s a very attractive campsite with a good playground for children and a forest walk to the royal residence of Sandringham. The estate is the area’s dominant tourist attraction, hosting open-air concerts, Shakespeare plays, food fairs and game and country shows, so – as Site Managers Mark Robertson and Steve Varney point out – even regular visitors have reasons to return.

Buses from outside the gate make it easy for visitors to access Hunstanton and King’s Lynn, while pizza and fish and chip vans offer the prospect of a break from cooking four nights per week.

Of course the main attraction is Sandringham House, where a headset-guided tour highlights the green baize table at which the Queen likes to do her jigsaws, the table mats that feature her winning racehorses and the ballroom that converts into the family’s Christmas cinema. 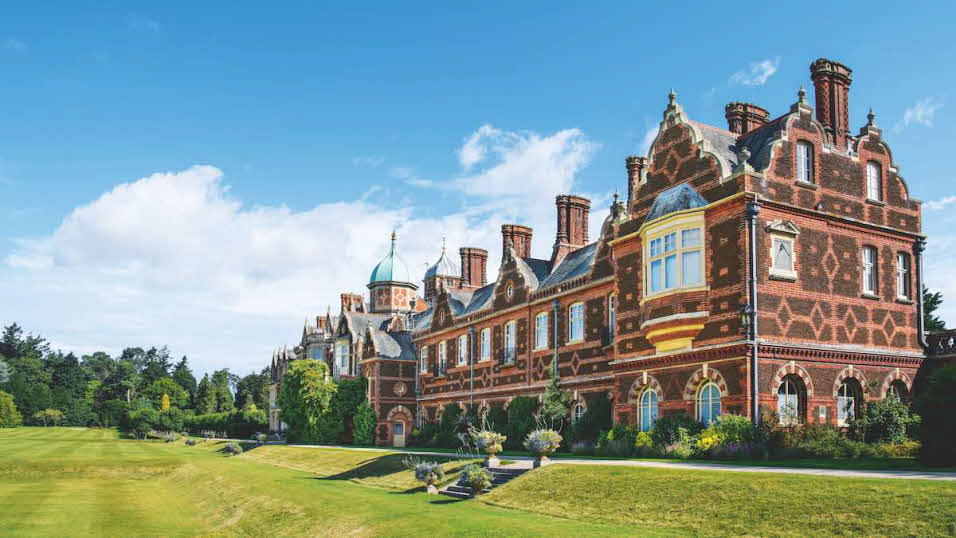 Visitors are only allowed access to 10 rooms, but they’re packed with treasures – some priceless, others poignant – including Union Flags carried by both Ernest Shackleton and Captain Scott to Antarctica, only one of whom survived their expedition.

I find a bench in the 60 acres of formal gardens and gaze out over the giant trees and immaculate lawns. It’s the perfect vantage point to reflect on East Anglia, with its extraordinary landscapes, waterscapes and ancient history – no wonder King Rædwald wanted to be buried here with all his treasures.