Fear of Missing Out

With the prospect of exploring coast, moors and everything in between, Jonathan Manning needs to make some tough decisions in south-west Devon

With two dramatic coastlines, a pair of national parks and a seemingly endless variety of attractions, Devon demands a spot of pre-tour planning. Try to do too much, and there’s a danger you’ll spend most of your time amid a blur of narrow roads and tall hedges, palms sweating at the wheel. Do too little, however, and there’s an acute risk of suffering from what teenagers call ‘FOMO’ – fear of missing out. There are so many things to see, do and enjoy in this corner of south-west England that tough choices are required.

Trying to find the sweet spot between these two approaches, this itinerary annexes a small corridor of the county to the south and east of Dartmoor, an area large enough to be packed with attractions but compact enough to navigate without spending hours on the road. Even so, the options seem boundless. Rugged granite tors or Exeter’s urban chic? Sandy beaches or plunging cliffs? Theme parks or historic houses? Traditional resorts or fishing harbours?

After a long drive, the first of these decisions can wait until tomorrow; for now, it’s a relief to find the entrance to Stover Club campsite just a few hundred metres from a dual carriageway, offering blissfully easy access to pitches cocooned by a ring of mature trees. 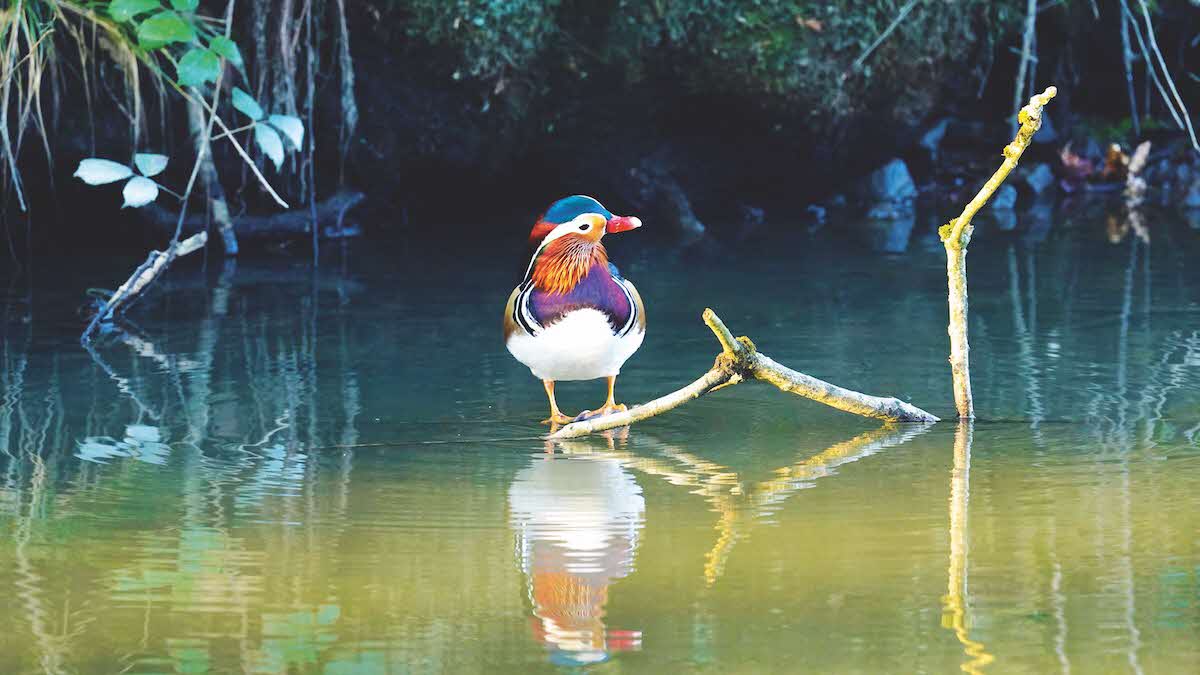 This is a ‘no facilities’ site, meaning no toilet block or playground, giving it a generally peaceful ambience. Stover Country Park is on the doorstep, and a late afternoon stroll around the park’s lake and ponds delivers the relaxing effects of a double G&T. Site managers Kath and Pete Bartholomew are keen to recommend even better walks within a few minutes’ drive, and point me towards the extraordinary outcrop of Haytor Rocks, barely five miles away and one of Dartmoor’s star features. The wedge-shaped tor is easy to climb and, standing proud above the moorland, its summit offers a breathtaking panorama of Teign Estuary down to the sea.

Walks radiate in all directions from Haytor, including an easy Miles Without Stiles trail along the old railway line that used to carry stone from the moorland quarry to Teignmouth. A couple of miles’ hike to the north stand the rocks of Hound Tor, fabled to be a pack of dogs turned to stone by a Medusa-like witch, and said to have inspired Sir Arthur Conan Doyle’s The Hound of the Baskervilles.

An attraction of a totally different kind is Trago Mills, just a mile away from the Stover site. Think of it as a garden centre with a difference – a small village and a regional institution. Whether you’re looking for plants, building supplies, vegetables, double-glazing or mobility scooters, this is the place to go. Not to mention the free-to-enter animal park containing ponies, pigs, goats and rabbits – handy for parents who need an end-of-visit bribe to encourage good behaviour! Add a go-kart track, crazy golf, boating lake and steam railway into the mix, and it’s no exaggeration to say that it would be easy to spend a day here.

Where Stover offers a stripped-back version of self-sufficient camping, East Dunley CL sits at the other end of the spectrum. It’s a vast, grass paddock, with the option of hardstanding pitches if the ground gets soggy, plus showers, a laundry room and free Wi-Fi, all for a maximum of five caravans.

Manager Dominic Collett raves about the stargazing opportunities on clear nights, and highlights the wildlife that visits during the day and at dusk, including woodpeckers, owls and a friendly pheasant.

Bustling Bovey Tracey, gateway to Dartmoor, is only a couple of miles away, and home to a fortnightly farmer’s market on Saturday mornings. Local art and crafts are on display at MAKE Southwest (formerly Devon Guild of Craftsmen) inside a handsome former mill down by the River Bovey. 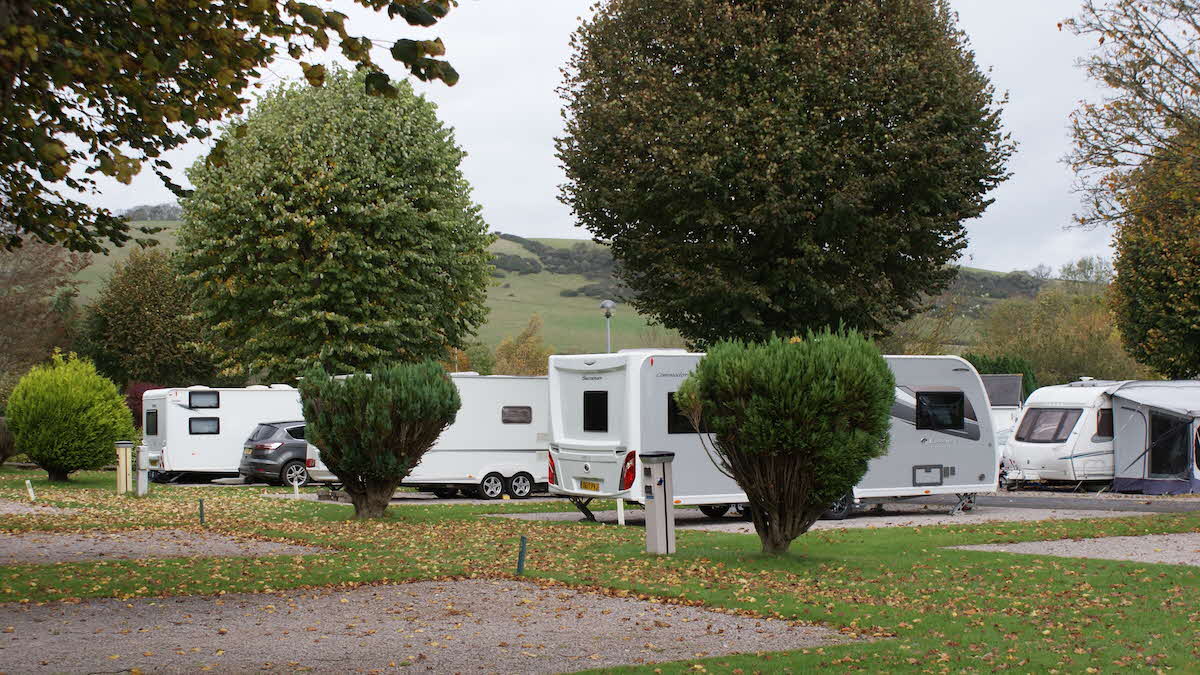 Totnes takes Bovey Tracey’s independent spirit to the next level, with arguably the finest and most beguiling high street in the country. In one small cluster alone there’s a harp shop next to a hardware store opposite an organic, zero-waste grocer (take your own tubs for pasta, pulses and rice, and bottles for olive oil).

Cafés, pubs and galleries punctuate this unique parade of shops, and chain stores are kept to a minimum, lending Totnes the feel of a place out of time. This free-spiritedness makes me feel uneasy as I stock up on supplies in the big supermarket, so I assuage my guilt by supporting the local economy at The Totnes Brewing Co, a craft microbrewery on the High Street.

Totnes Castle is a simple Norman fortress featuring a later, circular, stone-walled keep atop a steep, grassy mound. Its chief attraction is the 360º view from the top across the town’s rooftops. Berry Pomeroy Castle, three miles out of town, is far more impressive – a towering ruined castle-cum-stately-home hidden in a wooded valley. Keen walkers can follow the John Musgrave Heritage Trail north from Totnes to Berry Pomeroy; a lovely walk met by a café at the foot of the castle walls, where visitors can enjoy a cuppa without having to pay the entrance fee.

Back in Totnes, Steamer Quay Club campsite rests by the River Dart. The predominantly grass-pitch site is open from March to September in 2022, and it was busy all last year, says manager Kevin Hould. No wonder – it’s only a five-minute saunter to the middle of Totnes, and even closer to the start of a relaxing round-robin tour to Dartmouth via river boat and steam train.

Far less relaxing is the short drive to Ramslade Club campsite after I follow an ill-advised route on my sat-nav and endure a nerve-shredding experience along one of Devon’s ‘breathe-in’ roads, where any encounter with a vehicle coming the other way leads to a stand-off over who is going to reverse. Even the passing places are tight enough to bring on cold sweats. [We would advise visitors to follow the directions to site found in the Sites Directory & Handbook and on the Ramslade page on our website.]

Brow mopped and van safely ensconced at Ramslade, views of the surrounding hills slow my pulse, while the site manager’s description of the River Shack café at nearby Stoke Gabriel whets my appetite. The waterside eatery also serves up crabbing opportunities and is the place to ask about hiring a kayak from Totnes Kayaks for fun on the Dart. 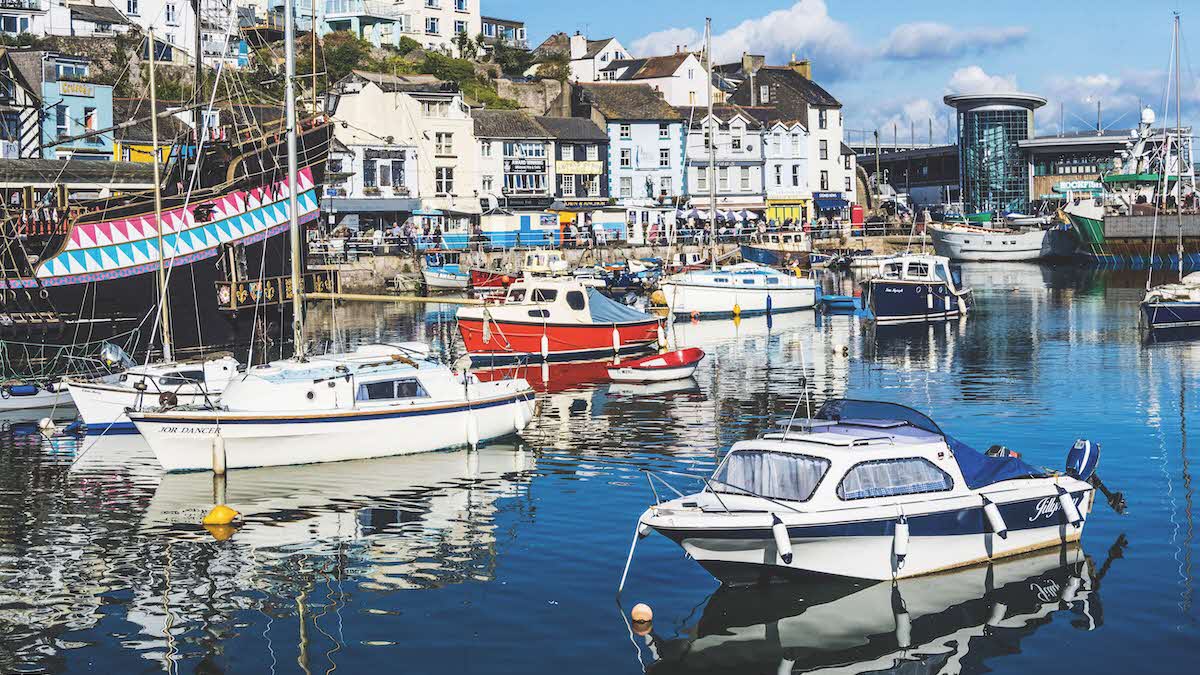 Plotting a full day out, I drive from Ramslade to Greenway, the former holiday home of Agatha Christie. The scaffolding and gauze of a restoration project shroud the outside of the whitewashed home, but inside provides a fascinating insight into the thriller writer’s life, including her expertise as an archaeologist. I was also impressed by her collection of silver – she and her husband owned a piece for nearly every year from 1648 to 1836. Christie only wrote one story while holidaying here, Dead Man’s Folly, which uses Greenway’s house, garden and boathouse as the settings for a Poirot murder mystery.

The most compelling means of departure from Greenway is a river cruise from the boathouse quay to Dartmouth, but I stick to the north banks of the Dart and head to Brixham, where the streets teem with tourists and trawlers bob in the harbour.

There are so many fish and chip shops in this part of the world that it’s a marvel there’s any catch left to sell farther afield. For a different taste of the sea, I head to Shoalstone Pool, a spectacular 53-metre lido at the northern limits of Brixham, carved from rock and filled with seawater. But a chill wind has me zipping up, not stripping off, as I climb the contours of the South West Coast Path from the town to Berry Head, where a café serves knockout bacon sandwiches, eclipsed only by the mouth-watering views over the sea and rock stacks. 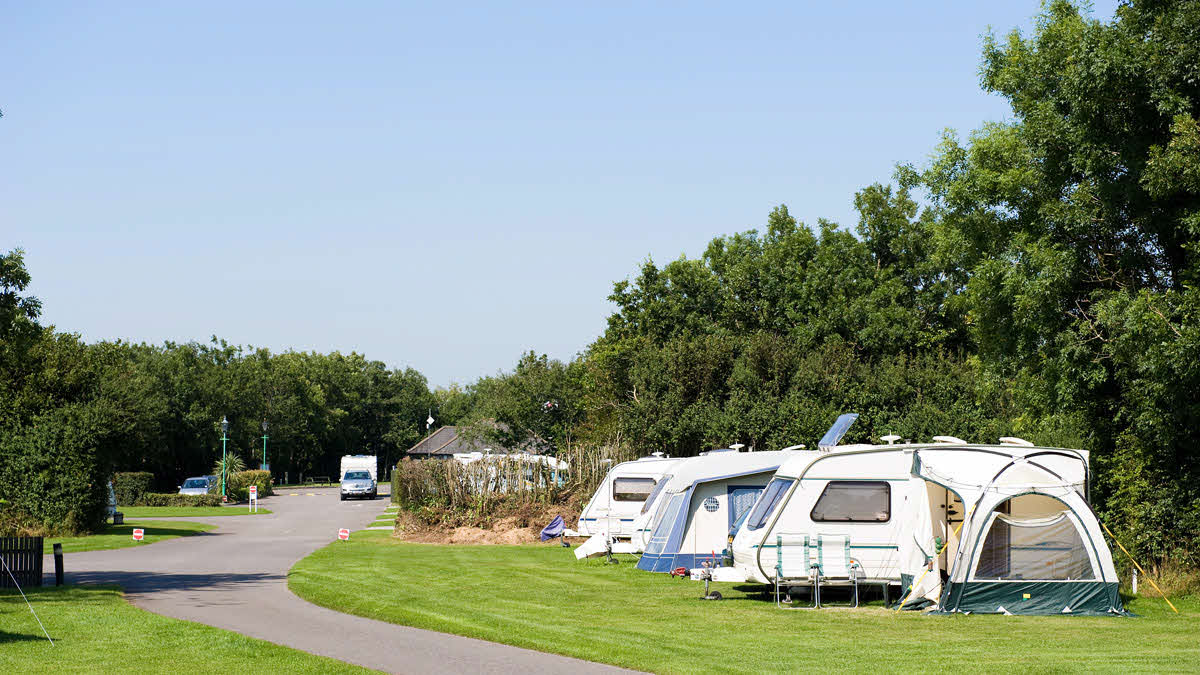 In 1944, American servicemen staged a full rehearsal for the D-Day landings, called Operation Tiger. It was a huge endeavour, and German intelligence spotted the build-up of ships, vehicles and troops. The Kriegsmarine sent S-boats to intervene, and their torpedoes sunk Allied vessels, leading to the deaths of over 700 troops in barely an hour – more than would die in the actual landings at Utah Beach some five weeks later. Today, a black, wreath-decorated Sherman tank commemorates the fallen.

On the other side of the road, the thatched Start Bay Inn gazes out over a pebble beach to the sea. It’s less than a mile’s walk from here to Start Bay Club campsite, which has a farm shop, brewery and café on the doorstep. As such, it’s tempting to lower the steadies and stay put, but the pull of Start Point Lighthouse proves irresistible.

Perched on a rugged peninsula that juts almost a mile into the sea, the all-white lighthouse flashes warnings on a treacherous stretch of coastline; on one stormy day alone, back in 1892, 52 seamen from four different boats perished in waves at the foot of these cliffs.

The clifftop walk via the lighthouse serves as a reminder of the roller coaster nature of the South West Coast Path. I enjoy an intoxicating hike that promises a better view every few yards, and entices me farther and farther along the trail. My initial plan of a short stroll to admire the plunging coastline develops into a four-hour walk and one of the highlights of this tour.

My final destination turns out to be something of a hidden gem, sufficiently off the beaten track to avoid the crowds that flock to south-west England in peak season, but within easy hopping distance of both the coast and Dartmoor.

A narrow road leads to Modbury Club campsite, but once parked it’s only about a mile and a half’s country walk to the pretty market town of Modbury, where a handful of independent shops cover all the essentials as well as the little luxuries – such as the cakes at The Old Bakery – that turn a camping trip into a holiday.

The sandy beaches of Bigbury-on-Sea lie to the south, the historic naval city of Plymouth is just 12 miles away, and the South Devon Railway steam line trundles north from Buckfastleigh to Totnes.

It’s hard to know where to visit first. The good news is that there’s no wrong answer: all will provide great days out. The bad news is that Storm Aurore is about to dump a fortnight’s rain in just a few hours, so I sit tight, FOMO dissipating, and take the chance to review a tour that has taken in tors and trails, castles and, of course, a magnificent coastline.