A two-site trip to Luxembourg

It may cover less than a thousand square miles, but there are countless reasons to visit the Grand Duchy of Luxembourg. 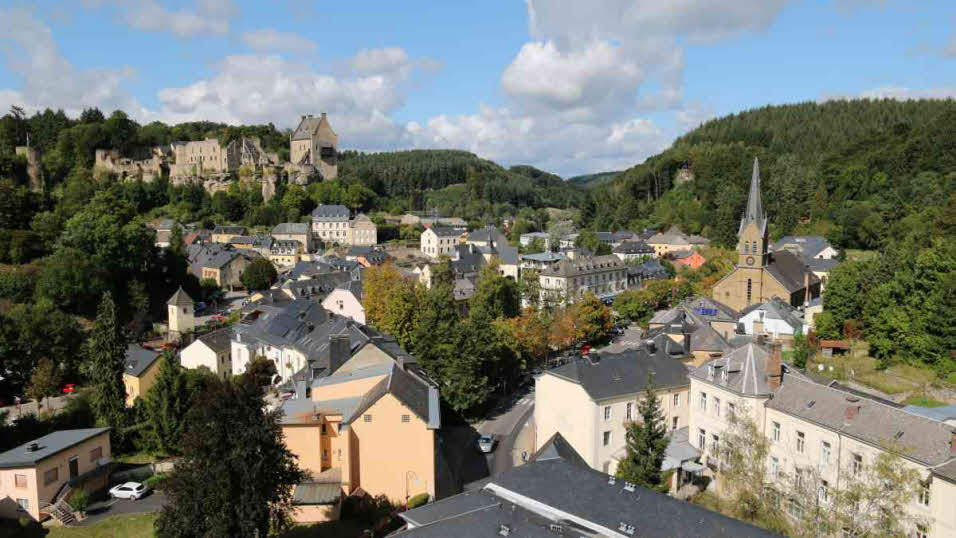 The town of Larochette, overlooked by its partly-ruined castle

Landlocked, bordered by the perennially popular holiday destinations of Belgium, France and Germany, and measuring just 60 miles from north to south, it would be easy to overlook Luxembourg in your plans. But there are numerous reasons why this country (officially the Grand Duchy of Luxembourg) is worthy of your attention – not least its intriguing history and beautiful countryside.

Following a relatively easy drive from Zeebrugge in Belgium, we arrived at our first site in the Grand Duchy – Nommerlayen, near the village of Nommern in the canton of Mersch. Despite the temptation to unwind on site, we decided to go for a walk, following one of the trails, (appropriately named the Well Being Trail), through the adjacent forest. Although it involved a couple of steep climbs, it was just what we needed and set the tone for a memorable break.

The following day we were ready to explore further afield. Just a handful of miles from the site we discovered picturesque Larochette, where a ruined castle – parts of which date from the 12th century – perches high on a rock overlooking the small town. Our destination, though, was the wonderfully named ‘Schiessentümpel’ waterfall near Mullerthal, which you can walk to easily from a car park on the CR121. Here the Black Ernz river cascades over rocks below a striking sandstone bridge. The crossing, which dates from 1879, has come to symbolise the region known as ‘Little Switzerland’ – apparently it’s the most photographed attraction in the area. 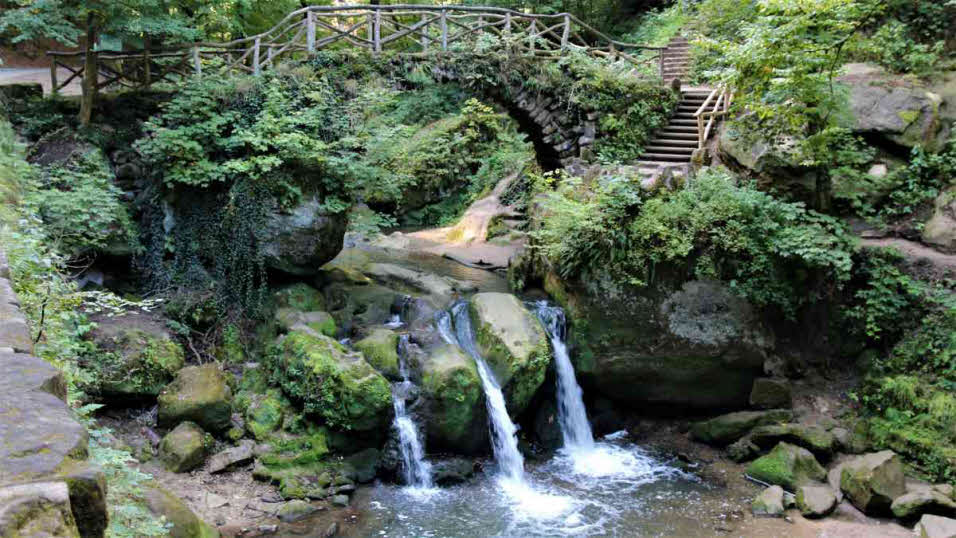 Lunchtime brought us to Echternach – Luxembourg’s oldest town and the cultural centre of Little Switzerland. An abbey was founded here in 698 by St Willibrord (a monk who hailed from Ripon in Yorkshire), and today the town is dominated by the Romanesque Revival-style Basilica that sits on its site. On the hour, the carillon of bells played Beethoven’s Ode to Joy – and what a joy it was to hear.

From Echternach we followed the River Sûre (which forms part of the border with Germany) to Wasserbillig where it joins the Moselle. Attractions here include the aquarium, which holds an incredible 90,000 litres of water and is home to a diverse range of native and exotic fish – from pretty neon tetras to vicious piranhas.

We then skirted the Moselle for a while, passing through countless vineyards, before returning to our base at Nommerlayen. As you drive along the country’s wonderfully smooth roads the vistas are wonderful – it seems that each bend of the road reveals another spectacular view, sometimes with a castle thrown in for good measure.

The next day we visited the ruins of Le Château de Beaufort before heading northwards towards Bourscheid. As we drove along the CR348 from Burden we came across a wonderfully located (and – as always in Luxembourg – spotlessly clean) lay-by with picnic tables and a fantastic view of Château de Bourscheid over the fields. 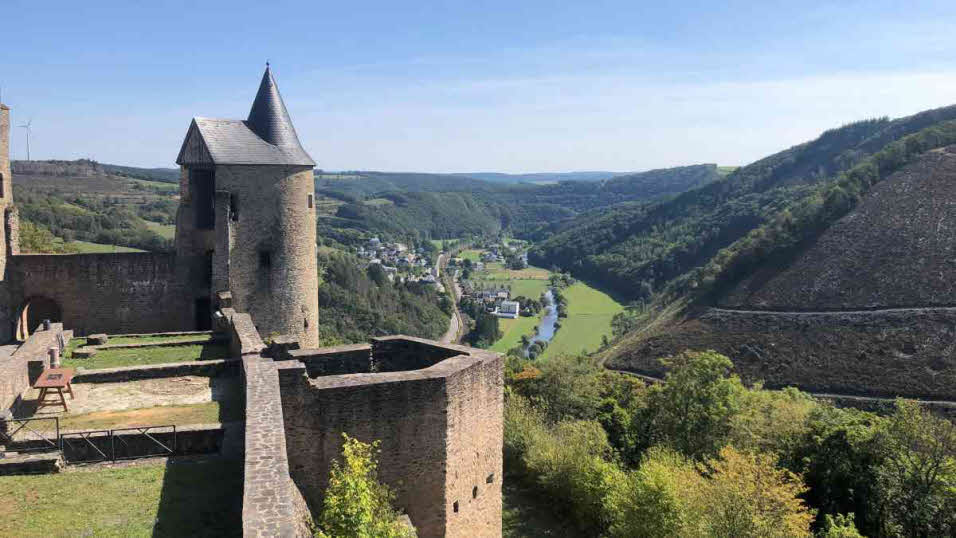 The castle at Bourscheid offers great views of the surrounding countryside

The castle (the country’s largest) is well worth a visit. Constructed between the 10th and 15th centuries, and boasting a series of cylindrical, cone-topped towers, it has a fairytale feel about it – and the views of the surrounding valley are incredible.

An eight-mile drive southwards then took us to our second stopover site – Camping Gritt at Ingeldorf. On the banks of the aforementioned Sûre, it enjoys an attractive location bordered by farmland. Well-paved footpaths/cycle tracks lead directly from the site into the town of Diekirch two miles away.

Diekirch was heavily involved in the ‘Battle of the Bulge’ – Germany's last major offensive on the Western Front during the Second World War – and you can learn more about this and the role of Luxembourg’s resistance fighters at the National Museum of Military History. We also stopped at the fascinating Motor Museum (and attached brewery museum).

Luxembourg’s capital city is easily accessible from both campsites, but the journey from Ingeldorf was incredibly straightforward. Just across the river from the site is a bus stop from which you can catch a direct service to Ettelbrück railway station. From there you can be in the city in under an hour.

If you can, sit on the right-hand side of the train as you’ll be rewarded with fine views of the city as you approach. It’s about a mile’s walk from the station to the old city, with its majestic Grand Ducal Palace, 17th-century Cathédrale Notre-Dame and lovely views down to the River Alzette. 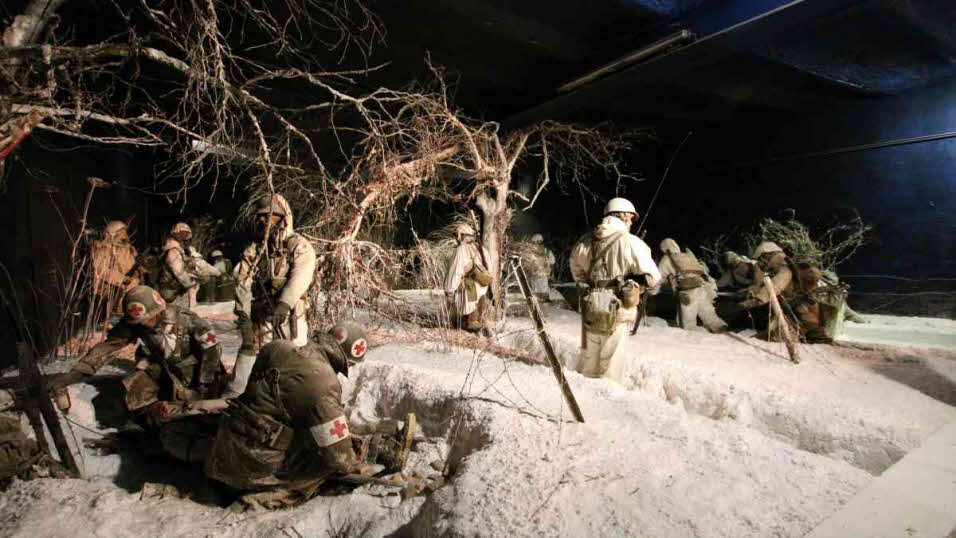 Display at the Museum of Military History, Diekirch

There is so much to see and do here, but high on your list should be the 'Bock Casemates' – an underground defence system comprising miles of tunnels and galleries set into a rocky cliff-face. Capable of sheltering thousands of defenders and housing kitchens, workshops and livestock, parts of the complex date to the mid-17th century when the town was under Spanish rule.

Sadly we didn’t get to see everything we had hoped to – but the beauty of this wonderful country is that everything comes in one easily accessible package; we can’t wait to return.