“We’d definitely go on a rally again, possibly for a longer stay” Read one couple’s story of their first venture into long stay winter sun holidays.

Mike and Jane Townsend - like many who start out in the touring lifestyle - were looking to maximise their newfound free time after retirement. Initially, their plan was to explore more of the UK, saving venturing further afield for a few years down the line when they had found their feet in the world of caravanning and motorhoming. 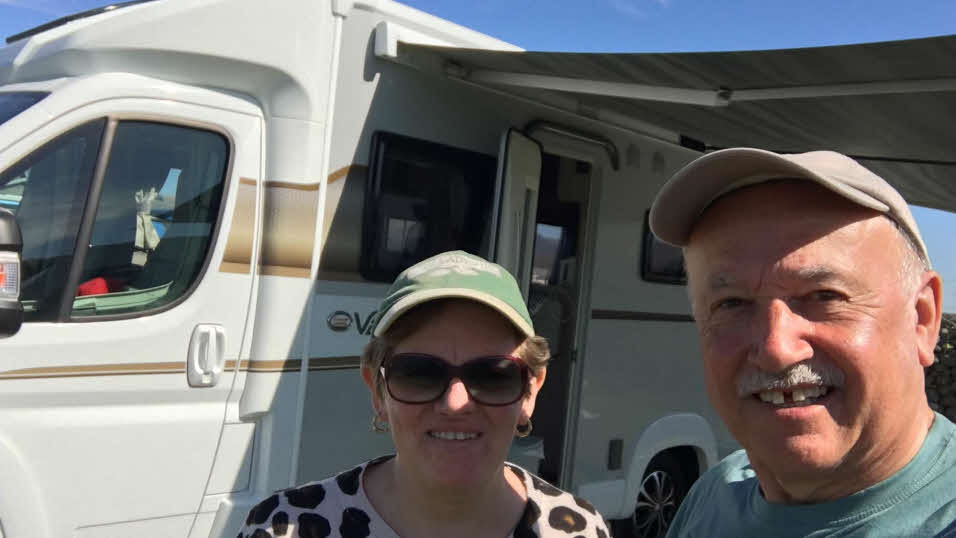 That plan soon turned to making their first trip to Europe less than a year later! New to the pastime, Mike and Jane began the process of purchasing a motorhome:

"We thought about a VW campervan – nostalgia kicking in. However, at our age and the need to run straight to the loo as soon as we wake up had to take part in the decision, so on second thoughts, we decided it had to be a Motorhome.

We were advised to rent one, (very good advice!) to make sure we would really enjoy it, so this we did. We hired from a local company - I did some batch cooking to freeze so that we wouldn’t have to eat out all the time or cook too much - I wanted to enjoy the holiday. When we picked up the hire van, I was disappointed to find that there was no freezer or microwave. All the batch cooking went back into the kitchen freezer. Having watched Susan Calman’s programme in her campervan, this only confirmed that we should definitely buy a motorhome. We need some space, and not be crammed in.

Having tried the rental campervan, we decided to buy a motorhome, and we then had a list of must-haves, don’t-needs, and would-likes. Needless to say, we started looking for our ideal second-hand motorhome. Armed with our list we quickly eliminated certain ones on the market. Do you realise how many different models there are? It’s a nightmare.

We eventually came to the conclusion that a brand new motorhome was the answer. Whilst looking around the local caravan and motorhome suppliers, we eventually decided on an Eldiss Autoquest 150. Which has an island bed, (no climbing over each other to get to the bathroom) the dining area can also be made into a bed, (just in case we decide to take the grandchildren on a short holiday) large fridge-freezer, oven, grill and microwave, three gas rings and one electric ring on the hob. So, we have an option, electric if we’re hooked up, gas if we’re wild camping. The bathroom has a loo, sink and shower. There are plenty of storage cupboards, and two pop-up seats with seatbelts under the lounge seating area. The whole thing is very well laid out, very compact, and has loads of storage space.

We placed an order in October 2020 but said we’d like delivery in March 2021 to take advantage of the new registration and a spring getaway. We were told that the dealer had a lot on order, so we should be ok, at this time. Because of the pandemic, motorhomes were in short supply. Fingers crossed, we’d get what we wanted when we wanted it. The registration then determined the name we gave our new home – MAX. When we first started visiting sites, realising it was brand new I think we made a few people jealous as a lot of people stood pointing and admiring MAX.

We made a conscious decision that for the first two years we’d try and see places in the UK only, there are many places we’ve never been to.”

After a test night on their driveway, Mike and Jane booked a campsite near Keswick and met up with some friends for their first stay away. They showed them the ropes, from grey water through to levelling up. Mike and Jane continued their touring adventures around Scotland and Wales, soaking up the scenery and gaining experience along the way. 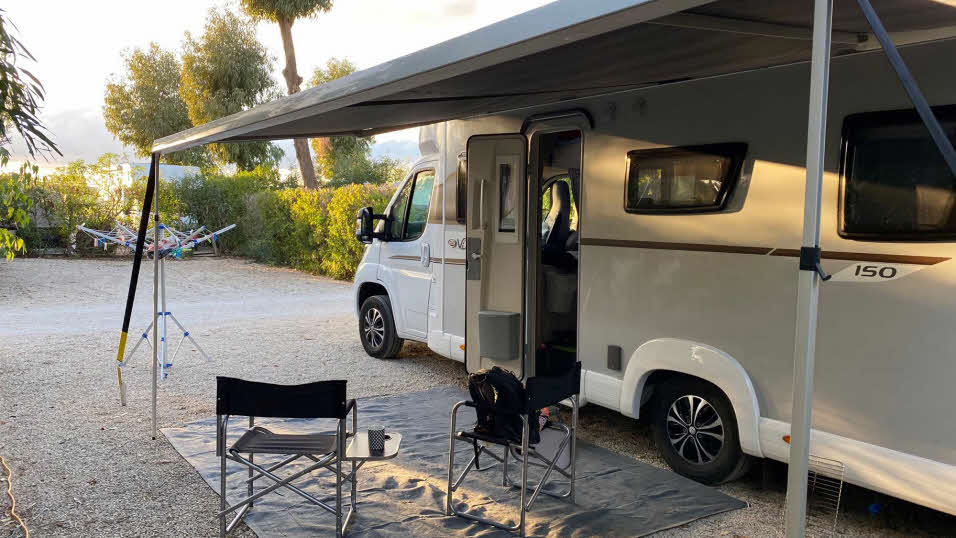 At last, it was time to venture further abroad, less than a year later than their first journey out in their new motorhome. Mike and Jane booked to go to Spain with friends at the end of January, testing the waters with a long stay winter sun holiday:

“Do you remember what I said earlier – ‘we’ll just travel around the UK for the first two years.’ Well, that went out of the window. Our friends decided to go to Spain at the end of January for a month and asked if we wanted to go with them. It didn’t take much thinking about, why not get away from the cold, and move to a warmer climate.

We had a few evenings with our friends to discuss what to do. The maps came out, we looked at sites that were open during the winter. It’s a long way to drive through France and Spain, so we decided to catch a ferry from Portsmouth to Santander, and just drive through Spain. The cost was comparable. Spend more on fuel, or spend more on a ferry crossing. The Covid pandemic came into it, so we thought travelling through one country, was preferable to travelling through two.

We booked the ferry, and a couple of stop-off sites, De Haro was an interesting place and was probably worth a two-night stop. We arranged to meet family in a small village called Benidoleg and stayed with them for two nights. The friends we travelled with went to a site in Valencia. We arranged to meet on the way to La Manga. Mike had found the driving quite easy, even on the wrong side of the road, and when we arrived at the Caravan and Motorhome Club campsite in La Manga, we found that we’d joined a ‘rally’. This was great because the hosts, Judith and Sam had arranged some activities. We weren’t pushed into joining these. We had some great meals, at very reasonable prices, Sam organised some walks and a visit to a local village, for a tapas trail. All the restaurants did different tapas, and you could pick and choose which restaurants you went to. 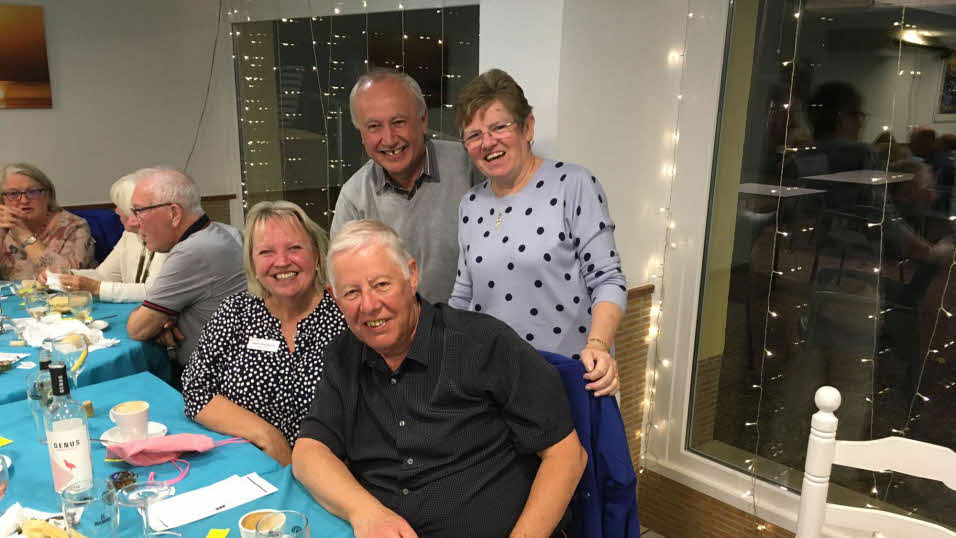 Mike and Jane with the group at the restaurant

Judith organised some craft activities, which were great, and we had some film nights. Sam organised a boule competition, we met a few different people, who were also on the rally, which made our two weeks very pleasant. We’d definitely go on a rally again, possibly for a longer stay.

Our return journey to the UK was via Despeñaperros and Camping Osuna, on the outskirts of Madrid, and we caught the underground into the city. We also stopped for one night at Burgos to break the journey, and not have such a long journey to the ferry.

We boarded the ferry at 14:30 Spanish time and waited for our friends in the bar. After a couple of hours, we phoned them to see where they were, as they were behind us in the line for boarding. They still hadn’t boarded. They explained when we finally met up with them, apparently, they had been put into a holding area and were one of the last vehicles to board. Just as were waiting to disembark from the ferry, our friends phoned to say a final goodbye and said they were on the motorway - I think we got the short end of the stick this time, it was an hour later when we disembarked!

We finally arrived home at 1:30 am after a wonderful holiday.”

Long stay winter sun holidays are a great way to escape the cold and wet British winters for the sunny skies of Spain and Portugal. Whether it's your first winter trip in the 'van or you're an experienced winter sun seeker, many members enjoy the company of others on a hosted winter sun holiday. 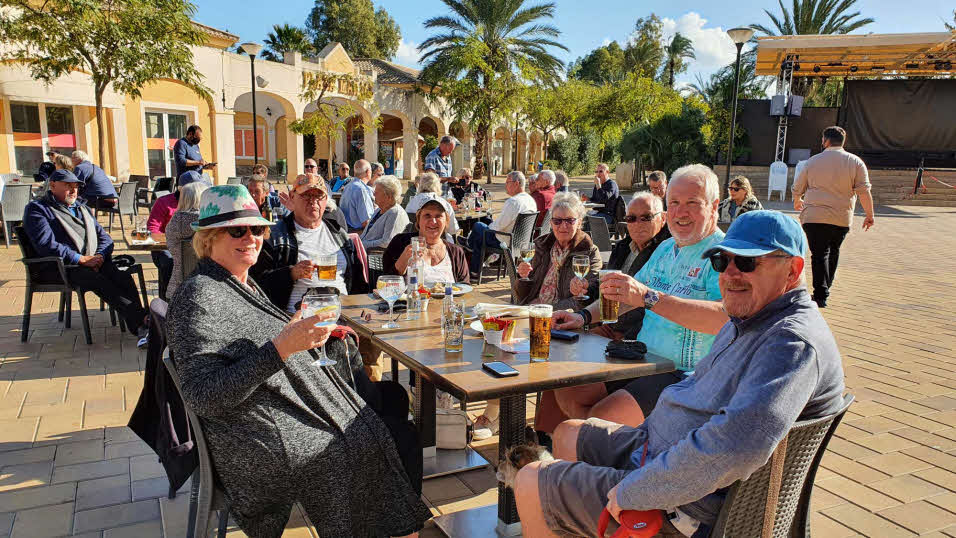 Our hosted holiday campsites run from 14 January to 1 April 2023, and you can choose to spend time at one site or take a leisurely tour of all three!

Our knowledgeable Club hosts will welcome everyone on site and make sure you know about all the activities and social events taking place each week - you're free to join in as much or as little as you wish. We rely on members to volunteer to run activities for the group or lead walking or cycling trips so this is a great opportunity to make new friends while learning something new or simply getting out in the sunshine.