Heidi Fuller-Love takes a deep dive into Croatia's Adriatic coastline, exploring the sights and tasting the local cuisine from the Istria region of Croatia 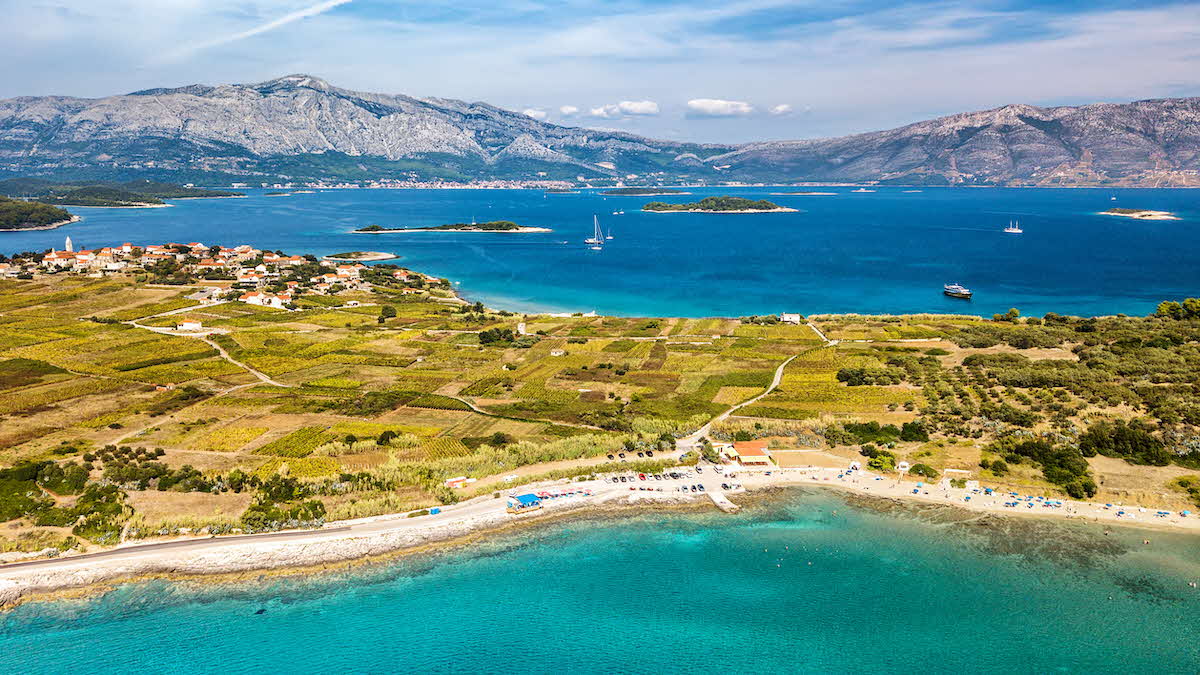 After a week of messing about on the water in Venice, one sunny Sunday morning in late spring we hopped over the border near Trieste, rolled along Slovenia’s coastline for half an hour and entered Croatian Istria, the country’s westernmost peninsula.

It was also going to be a trip down memory lane for us: in 1989 we travelled through Croatia – which was then part of Yugoslavia – in an old Citröen 2CV, spending nights in damp guesthouses and surviving on spam, jam and ersatz coffee.

Now, however, as we avoided tolls and traffic on a meandering road to our first site in Umag, we were bowled over by the changes: once grim, grey houses were bright and inviting; shops that showcased woollen socks and clumpy shoes now sold stylish dresses and elegant suits; and restaurants offered far more inviting fare.

Driving through rolling hills planted with vines and olives, we reached the walled town of Buje, with its striking medieval tower and ancient stone houses. Here we stopped off for lunch at Konoba Malo Selo, a cosy restaurant owned by the same family for several generations (enjoying a succulent platter of homemade ravioli sprinkled with musky, garlicky slivers of white truffle), before making our way to Camping Park Umag. 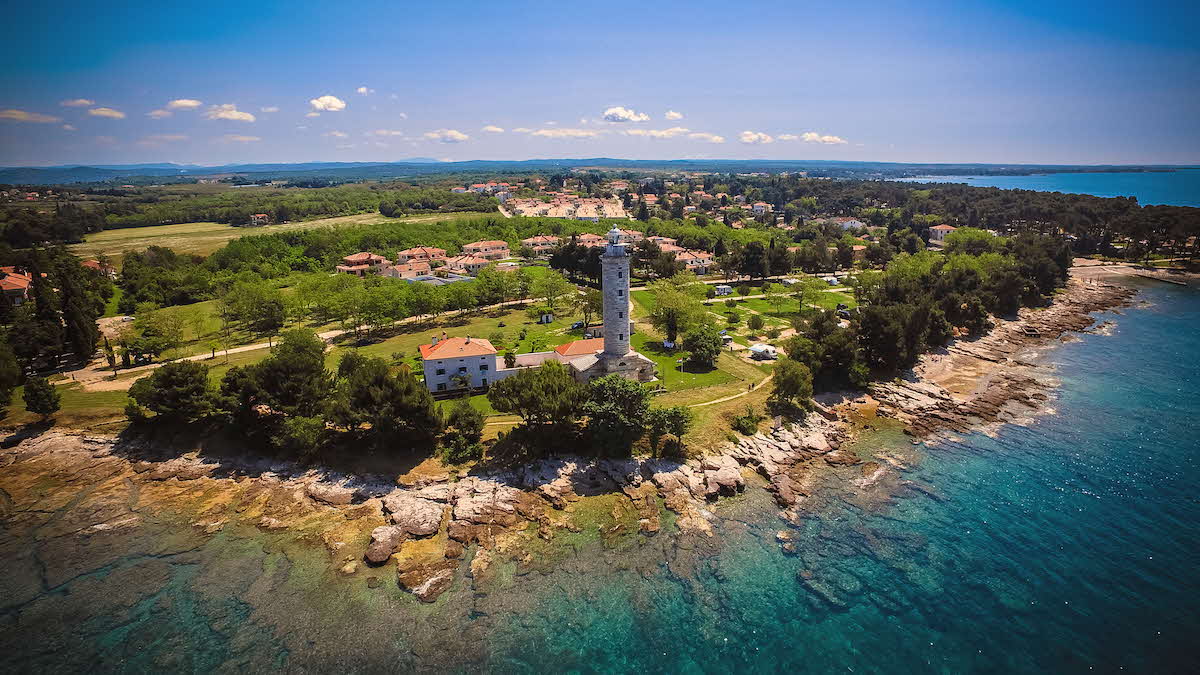 With its swimming pools, seafront bar and tree-shaded pitches, this large and lovely site overlooking the sparkling Adriatic Sea was a perfect base for exploring the area.

Early the next morning we followed a coastal pathway to the town of Umag itself, known to racket sport fans as the site of the annual Croatia Open Umag, the country’s oldest and most famous tennis tournament. Working up an appetite by wandering the old town’s cobbled streets (stopping to view the beautiful frescoes on the ceiling of the glorious 16th-century St Roche’s church), we headed to the Lido, a lovely restaurant on the seafront where we dined on local specialty hobotnica ispod pekom – deliciously tender octopus slow-cooked in a stone oven. After lunch we hopped on Umag’s little tourist train for a breezy ride along the coast to Katoro, where we splashed around in the (chilly) water and lazed on the pretty, pebble-strewn beach until sunset.

On another afternoon we hired bikes in Umag and cycled along sandy paths to Savudrija, site of the Adriatic’s oldest working lighthouse. The ride along partly unpaved roads, pedalling through pretty hamlets framed by brilliant blue seascapes, was glorious. Sadly, it’s no longer possible to climb to the top of the 95ft lighthouse, but this striking tower was the perfect backdrop for another sight that is unique to Savudrija. Due to harsh winds known as lebić, locals suspend their small fishing boats on a framework of wooden poles when not in use, and from afar these suspended vessels look like washing hung out to dry.

After lunch in Porto Salvore, an excellent fish restaurant, we cycled back along the coast to Bašanija for a tasting session at Degrassi, one of Croatia’s leading wine producers.

Before leaving Umag we took a boat trip to visit the breathtaking Brijuni archipelago, which consists of 14 islands. We spent a fascinating day exploring Veliki Brijun, which was the summer home of the Yugoslavian leader, Josip Broz Tito, after the Second World War. Part of the Brijuni National Park, the island also boasts a safari park packed with exotic animals. 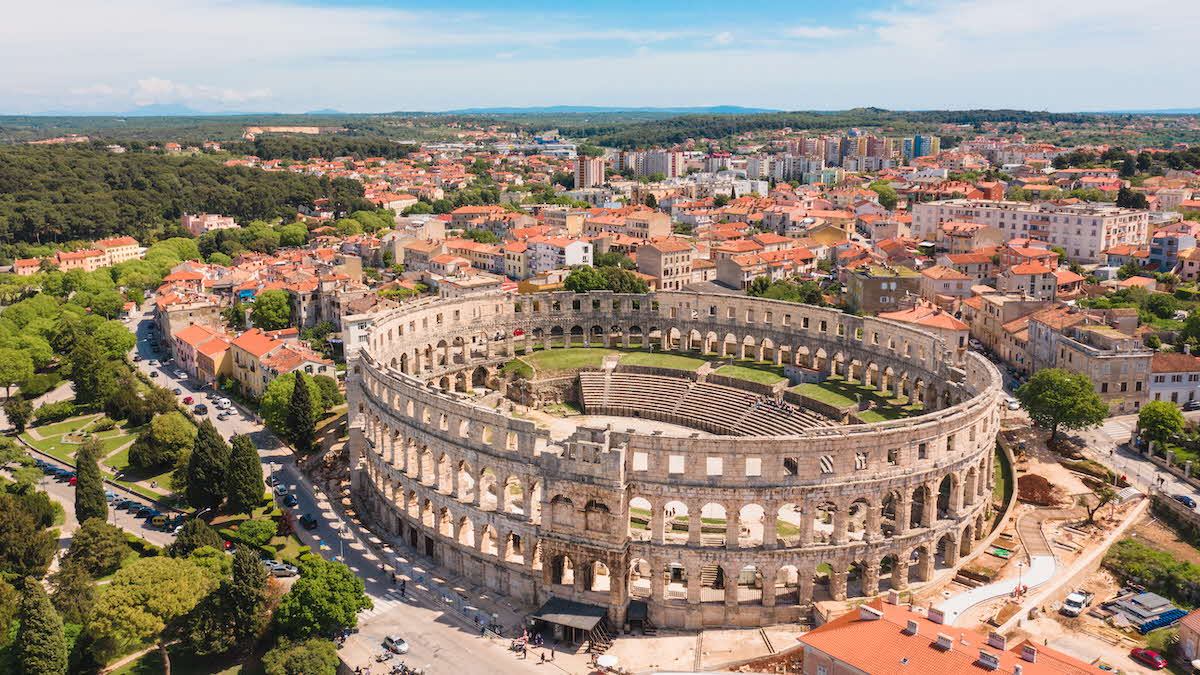 The following morning, we wiggled down the coast towards Pula, stopping en route to visit pretty Poreč with its cobblestone streets and charming little cafés clustered around a UNESCO World Heritage-classed sixth-century basilica, and then detouring to visit Rovinj’s breathtaking Heritage Museum, which houses Italian art dating back to the 1400s.

With its near-intact Roman architectural remains – including a 2,000-year-old amphitheatre where gladiators once battled – Pula, Istria’s largest city, oozes charm, and we weren’t surprised to learn that writer James Joyce lived here at the start of the 20th century.

Leaving Pula in late afternoon sunshine, we followed the busy E751 to Rijeka, Croatia’s third city. There, we made a beeline for Konoba Tarsa, a backstreet café renowned for its local specialities, including dark pie, a pastry Pandora’s box packed with squid, cuttlefish and octopus.

After a peaceful night rocked by waves aboard the quirky Botel Marina, a floating hotel moored in Rijeka’s picturesque port, we followed the Kvarner Gulf, catching hazy glimpses of Krk, Cres and other islands, and then climbed inland via Jezerane and Modruš to our final destination, Plitvice Holiday Resort. 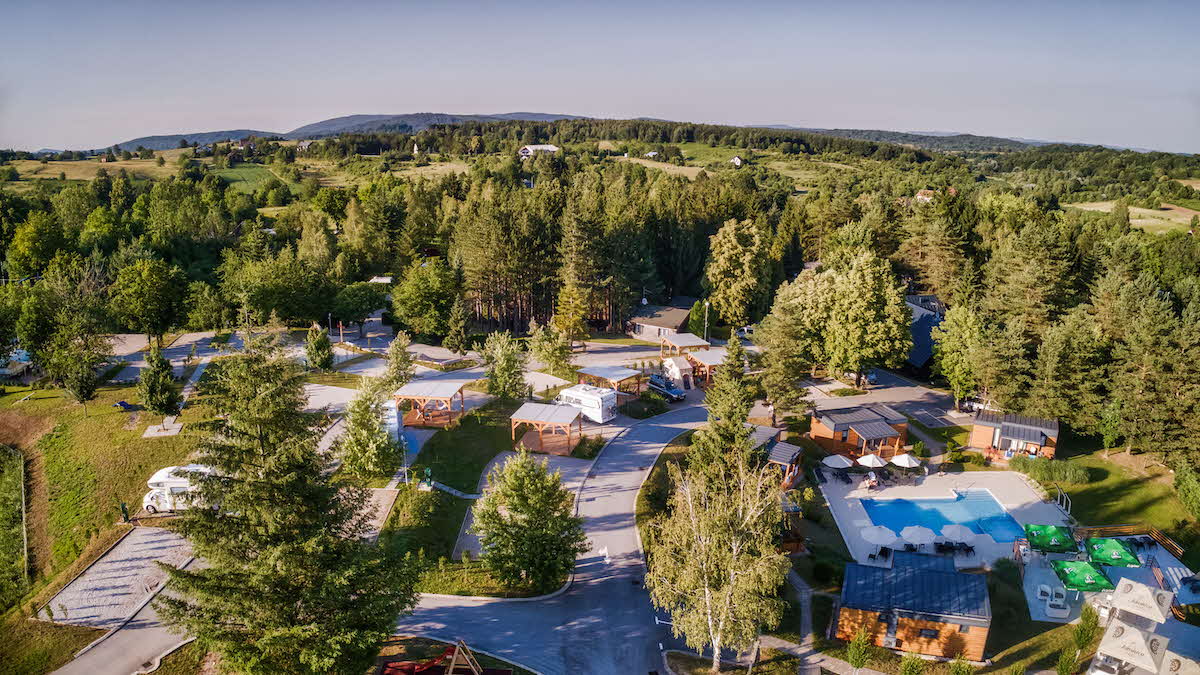 Over the next few days we picnicked on slices of punjena paprika (meat-stuffed pepper) and cešnjovka (spicy sausage) alongside Plitvice National Park’s glittering lakes; we dived deep to see the stalagmites at Barać Caves; and we visited Rastoke, a pretty hamlet of traditional wood-shingled houses surrounded by gushing waterfalls and a magical tangle of hiking trails.

We agreed that Plitvice Holiday Resort, a green oasis at the heart of Croatia – and a world away from the busy beach resorts – was the perfect place to end our stay.

If Heidi has inspired you, visit camc.com/overseas to book these campsites or to view our 24-night Slovenia and Croatia escorted tour departing in September.