A wonderful tour of west Wales

While I have visited Wales in the past to enjoy the rugged splendour of Snowdon and its surrounding Victorian seaside towns, this tour marked my first foray into west Wales. With sunshine forecast across the board, and the peak-season crowds having headed home, I couldn’t have chosen a better moment to explore its cultural heritage and limitless white sands.

My journey begins in New Quay in the west. Not to be confused with Newquay in Cornwall, this village resort boasts a stunning coastline, clear waters and secluded coves. Once a hive of shipbuilding activity, today it offers the perfect setting for a great getaway. The pretty harbour rests below a raft of colourful houses, gift shops and cafes etched into the hillside. Sandy beaches form an arc around the bay, and you could easily while away a day here, taking an occasional dip into the welcoming water or heading to one of the cosy cafes from which, if you are lucky, you can watch dolphins splashing out at sea.

New Quay village itself is thought by many to be Llareggub (read it backwards!), the fictional setting for Dylan Thomas’s seminal play, Under Milk Wood. Thomas lived in New Quay from 1944 to 1945, and in honour of Wales’s literary great, a Dylan Thomas Trail takes you around some of his favourite spots. It’s a lovely walk, but part of the route is only accessible at low tide. Cardigan County Council has produced a free map to help you navigate (cardigan-bay.com/pdf/ DylanThomasTrail.pdf). 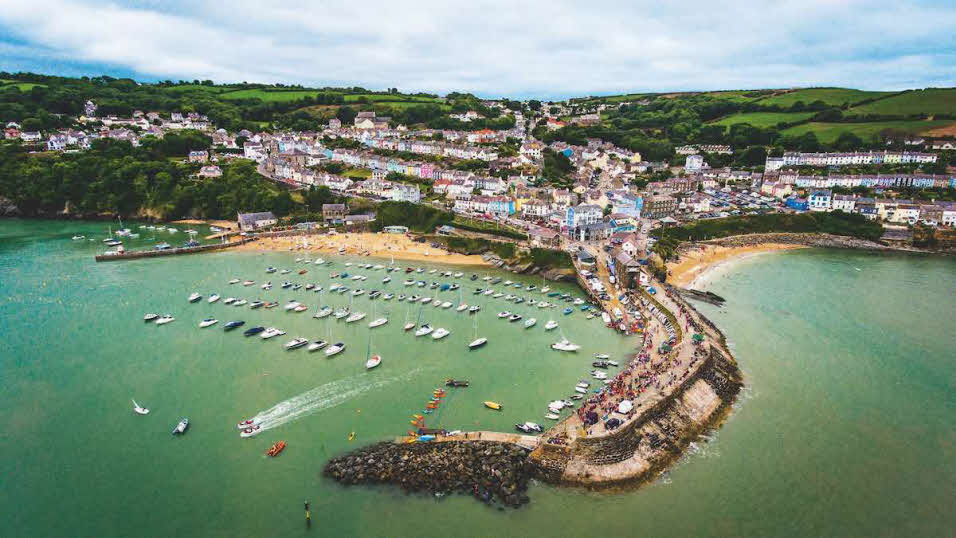 The nearest Club site is Shawsmead, a compact, peaceful haven tucked away in Llanarth, just 15 minutes’ drive from the coast. If you are looking for a truly tranquil experience, Shawsmead is for you: there is no playground or dog walking area on site, meaning those members who enjoy a quieter holiday will feel right at home here.

There is plenty to explore in the area, including the harbour town of Aberaeron, which is under 10 minutes’ drive away. Here you will find a nice mix of gift shops and eateries. I opted for a hearty steak pie lunch at The Cellar, an award-winning café/bar/restaurant with plenty of indoor and outdoor seating, as well as harbour views.

The Ceredigion Coast Path (which runs for 60 miles between the Teifi and Dyfi estuaries) boats a wonderful stretch between New Quay and Aberaeron that has both low- and high-tide options. Taking in woodland and some truly stunning views, this 6.5-mile walk is worth undertaking whatever the time of year. To get back to site, the 405 Poppit Rocket bus runs regularly to New Quay from Aberaeron high street.

From Shawsmead my next planned stop was St David’s Lleithyr Meadow Club site, but should you fancy breaking up the 56-mile journey or simply decide to sample a little more of west Wales’s hospitality, then why not plan a stay at Bryncelyn CL, which rests on the edge of the Preseli Mountains? A small gate opens directly onto acre upon acre of moorland and the awe-inspiring splendour of the Pembrokeshire Coast National Park.

For anyone who hasn’t visited before, it is a revelation – the park offers 615km of paths and bridleways, beaches and woodland, and there are opportunities to sail, kitesurf and canoe, as well as horse-ride, hike and climb. It may be the smallest of the national parks, but it fills every last inch with natural delights.

On to the St David’s site , where you will receive an exceptionally warm welcome. Accessed via some particularly narrow lanes, the tricky approach opens onto a spacious site that has some splendid views of the well- known hill, Carn Llidi. This is a great base from which to explore the area and you can leave the car (or motorhome) behind and walk to nearby Whitesands Bay or into St David’s. There is also a regular bus that runs from the site into the city.

The beach – as it name suggests – consists of miles of shimmering sands and boasts some of the best surfing in the UK. A couple of hire companies operate from the car park at the entrance to the bay (£5 per day; very busy in high season), offering body boards, surfing lessons and deck chairs. As with most places these days, stand-up paddle boarding (SUP) is a popular pastime – or you can just sit back and enjoy the spectacle of surfers catching waves.

St David’s – Britain’s smallest city – is simply lovely. It has been attracting visitors for centuries, first as a place of pilgrimage and latterly as a tourist hotspot thanks to its proximity to the glorious coastline and its magnificent 12th-century cathedral – also named St David’s – which sits beside the River Alun. There are plenty of cafes, pubs, gift shops, galleries and ice-cream shops to explore among the historic streets.

I opted to head to nearby St Justinian’s for a boat trip to Ramsey Island, run by Thousand Island Expeditions. The tour – which took around 75 minutes – cannot be recommended highly enough. We saw plenty of seals and their cubs (and a glimpse of the slightly smelly ‘Batchelors Bay’, where all the unmated males hang out!) as well as puffins, gannets and gulls.

The well-informed skipper provided expert commentary on the history and geology of the area, all the while navigating some of the strongest currents in the UK. The tour was incredibly well organised and I would advise following to the letter all guidance regarding parking, clothing and directions. Club members get a 15% discount, thanks to the Great Savings Guide. Visit camc.com/greatsavingsguide for details.

Edging south, my next stop was Freshwater East Club site, which also offers access to an array of majestic beaches – Broad Haven and the beautifully named Barafundle Bay are breathtaking, as is the popular seaside resort of Tenby, with its colourful harbour. 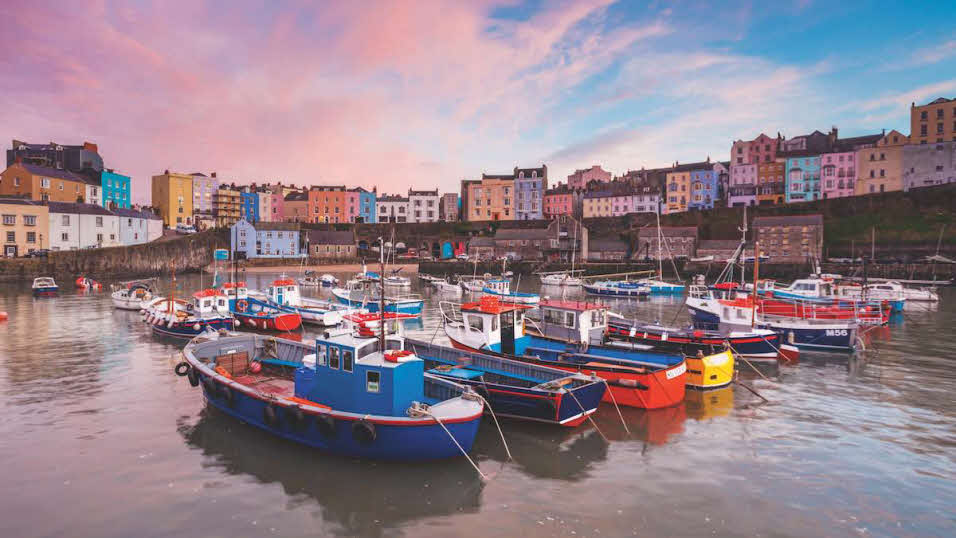 Once again there are plenty of walks and watersports to enjoy but, should you fancy soaking up more of this area’s rich heritage, visits to Pembroke Castle and Carew Castle (with its Tidal Mill) are musts.

The latter is a partially ruined fortress that has stood guard over a 23-acre millpond for centuries, while the Tidal Mill is the only one of its kind in Wales. A buggy- and wheelchair- spacious site boasts a sizable, brand-new play friendly circular walk takes in a medieval bridge and an 11th-century Celtic cross, as well as providing stunning views over the water.

Next stop: Burry Port and the Pembrey Country Park Club site. If you are looking for a area and direct access to the Country Park itself, which is brimming with activity options such as mini-golf, cycling, skiing and tobogganing, an adventure playground, miniature train and more than eight miles of golden sands at Cefn Sidan. The first beach in Wales to receive the coveted Blue Flag award, this long stretch of Carmarthen Bay coastline has been compared to that of California. Visiting in early September, there was hardly a soul to be seen – it was the perfect place to make the most of a final burst of warm weather.

With a heavy heart I bade farewell to the magnificence of Cefn Sidan and set out to my final location – Gowerton, a Club site that bills itself as the ‘Gateway to the Gower’. Passing through pleasant villages on the way, I arrived at an inviting and open site that offers an ideal base for those looking to explore the Gower Peninsula in all its glory.

Designated an Area of Outstanding Natural Beauty in 1956, the Gower does not disappoint. Rhossili Bay (a 38-minute drive from the site) has become incredibly popular over the past decade, winning Wales’ Best Beach in 2018 and landing a Top 10 spot in a 2014 TripAdvisor review of the World’s Best Beaches. It is stunning, and again, at this time of year when the sunseekers, kite surfers and paddleboarders have dispersed, it is as peaceful as it is picturesque. 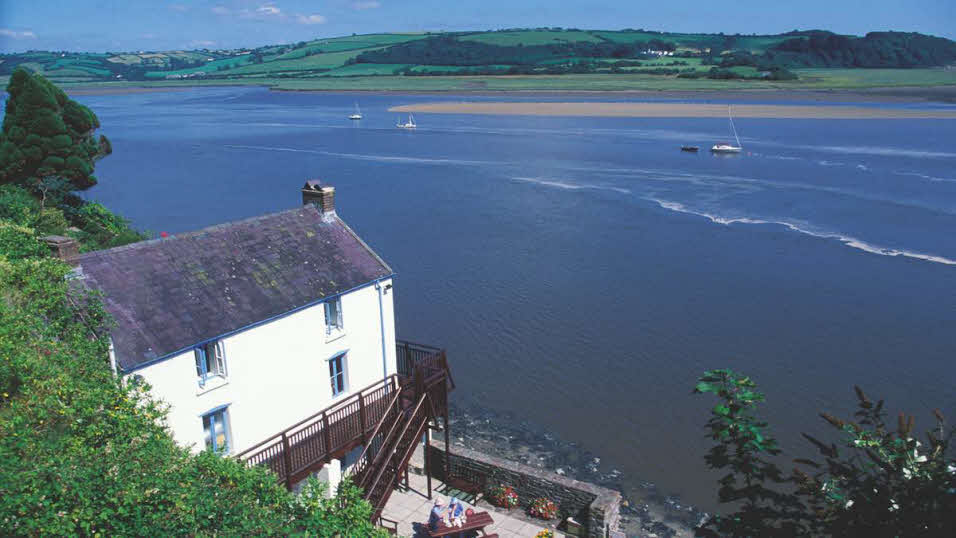 Watersports, walks and trails abound for cyclists in this area and the Millennium Coastal Park (accessible from both Pembrey Country Park and Gowerton) makes for a great day out. The park is dotted with lookout points offering incredible views over Carmarthen Bay and the Gower Peninsula, and boasts a range of attractions, including a wetlands centre and an adventure playground – not to mention a café and ice-cream kiosk.

A stay at Springfield CL in Cilibion is highly recommended, offering visitors the opportunity to really soak up the rural surroundings, and enjoy an outstanding vista across the Loughor Estuary.

As well as being ideal bases from which to explore the Gower, both Gowerton and Springfield CL are perfect for visits to Swansea and its environs, where we once again find ourselves in Dylan Thomas territory. Swansea offers numerous spots where you can seek him out – his school sports ground, several of the pubs he frequented – and you can even stay at his meticulously restored birthplace, area.

The wonderful Worm’s Head promontory was another of the poet’s favourite places and he even considered moving there until it was pointed out to him that there wasn’t a pub nearby! Only accessible at low tide, it is yet another must-see that promises unbelievable views. As an introduction to west Wales, this whistle-stop tour was a revelation. Thomas once described the ‘long and splendid- curving shore’ as his ‘world’, and after enjoying a wonderful few days in this Welsh idyll, it is easy to see why.