Dales, Moors and much more in Yorkshire

Jonathan Mannings revels in the glorious scenery of the Yorkshire Dales and North York Moors on his way to the coastal towns of Whitby, Scarborough and Bridlington. 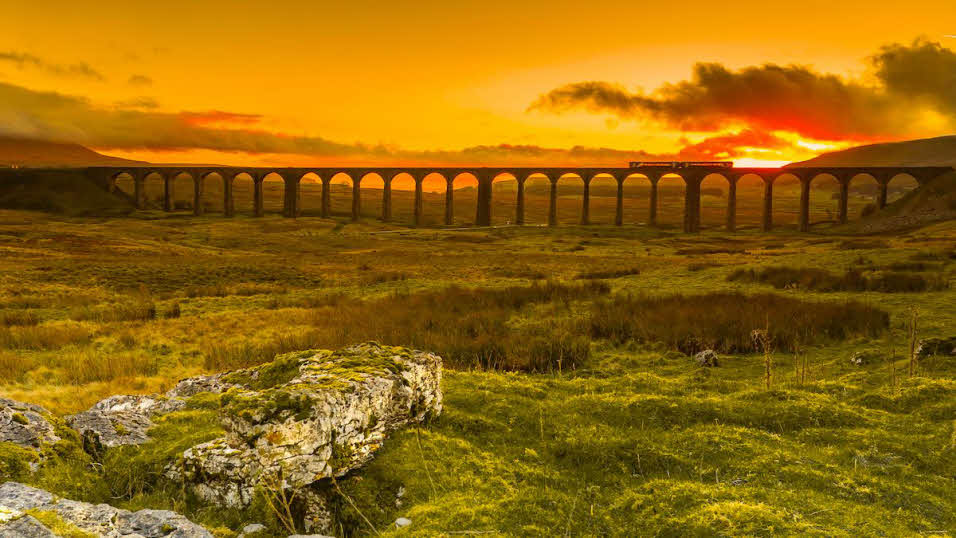 It’s only at the end of the cheese-making demonstration at Wensleydale Creamery in the glorious Yorkshire Dales that our guide briefly mentions ‘Wallace and Gromit’, the Oscar-winning stop-motion pair famous for their association with the crumbly, white cheese.

Why, the guide asks, did the writers choose Wensleydale as Wallace’s favourite? Was it something to do with its northern roots I wondered? Apparently it was actually due to the comedic value of a modelling-clay mouth stretched into a super-wide smile as it says “Wensleydale”, coupled of course with Peter Sallis’ glorious accent. Cheddar,
on the other hand, requires more pursed lips to pronounce.

Campers staying at Hawes Club site are well placed for a visit to the creamery. But they also benefit from spectacular views to Wether Fell in the south and the limestone scar of Stag Fell to the north, and it’s no surprise to hear that walking is hugely popular among the members who visit.

“You can do a short walk to the waterfall at Hardraw or climb Wether Fell and walk along the ridge to Burtersett and be up in the fells for six hours,” says Site Manager Roger Schofield. “There are so many walks straight from the site.”

Campers Mike and Sue Powell are using the site as a base camp to join their daughters, who are hiking the Coast-to-Coast path. In the meantime, they have been exploring Wensleydale by bike, pedalling to the waterfalls at Aysgarth and to pretty Semerwater. Committed road cyclists can test their climbing legs on the punishing ascent of the Buttertubs Pass, which featured in both the Tour de France and Tour de Yorkshire. Be warned, it’s a fearsome climb. 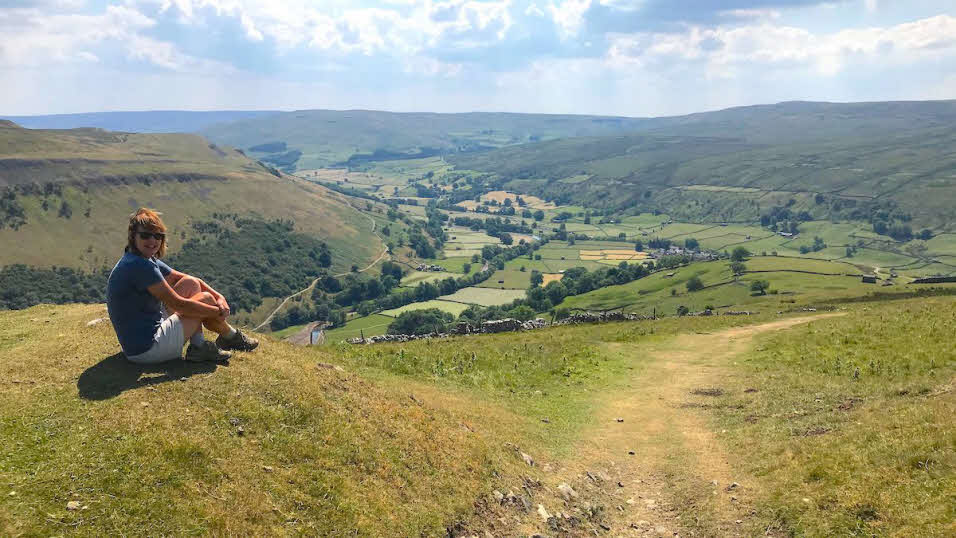 The five-minute stroll from the site into Hawes is much less taxing. The bustling little market town has a first class selection of quirky shops as well as a wide choice of cafes and pubs. In normal times, crowds mingle to watch the River Are crash below a stone bridge in the centre – it’s one of the most photographed sights in the Yorkshire Dales – but a lengthy drought has reduced the river to a trickle. It has also taken the sting out of Hardraw Force, the tallest single fall in England, which is barely a mile from the Club site.

More impressive waterfalls on the River Ure thunder through Aysgarth, a short drive east, but my plan takes me north through Askrigg, where key scenes from the original James Herriot series All Creatures Great And Small were filmed. Truth be told, ‘plan’ is an exaggeration, given that I had failed to spot the Yorkshire Dales Brewery’s beer garden on the way into Askrigg during my research, and the steep contours as the narrow road twists its way from Wensleydale to Swaledale. This is a dramatically beautiful route, but a challenging drive for a caravan or motorhome.

It’s a relief to arrive at Richmond Hargill House Club site, which could not be more conveniently located, close to the A66 dual carriageway that sits between the A1 and Cumbria. On the pitches closest to the road there’s no avoiding the rumble of traffic, but a little lower down this steeply tiered site it’s the far-reaching views south to High Moor and Marske Moor that seize the attention.

A bus stop just outside the gates offers an easy ride to Darlington or Richmond, a fine-looking stone town with handsome castle ruins perched above the broad River Swale. Site Manager Janet hands me a walking leaflet for the Richmond Drummer Boy Walk, a three-mile stroll which runs along the Swale. Gleeful squeals bounce along the river from bathers taking advantage of the unusually calm, shallow waters to splash in the sunshine. 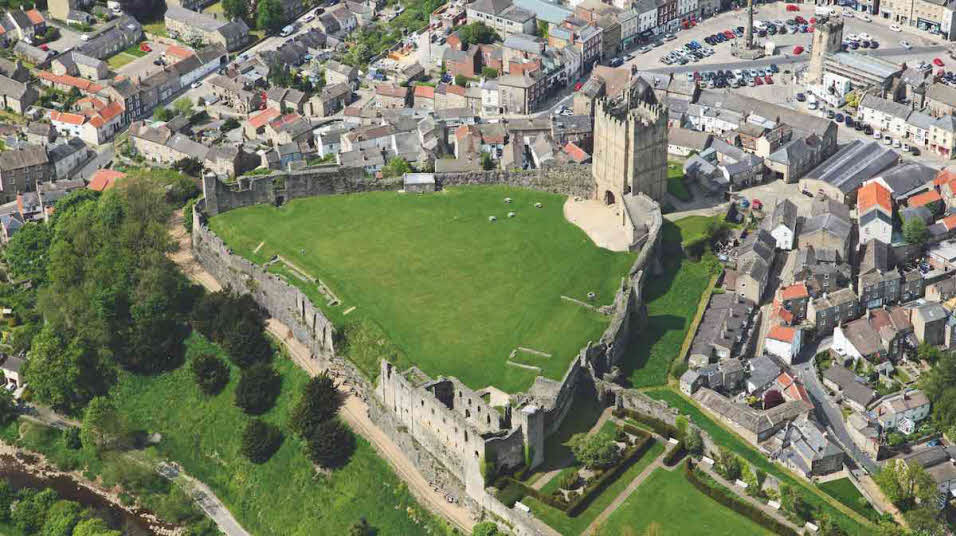 Picturesque Barnard Castle is just a short hop up the road from Richmond Hargill House but on this occasion I point the bonnet east and make brisk progress to my next stop, Bank Head Farm Certificated Location (CL), just outside Northallerton. The grass site gazes over a valley with a beck at its foot and a magnificent bank of woodland on the far side – it’s hard to think of a more perfect setting for a small site than this short-mowed paddock.

Northallerton is another example of those irresistible market towns that North Yorkshire does so well, hosting busy markets every Wednesday and Saturday. Just outside of town, Mount Grace Priory (free to English Heritage and National Trust members) offers a dreamy way to spend an afternoon. The ruins of the Carthusian priory are in remarkable shape, and there’s an intriguing reconstruction of a monk’s cell. The priory also has 13 acres of gardens, bursting with flowers and water features, and a large house containing décor from the Arts and Crafts movement.

Mount Grace sits at the foot of the Cleveland Hills, the ‘bouncers’ that guard the entrance to the North York Moors. Beyond, the moors offer a markedly different landscape from the dales, but create the same sense of thrilling escape. 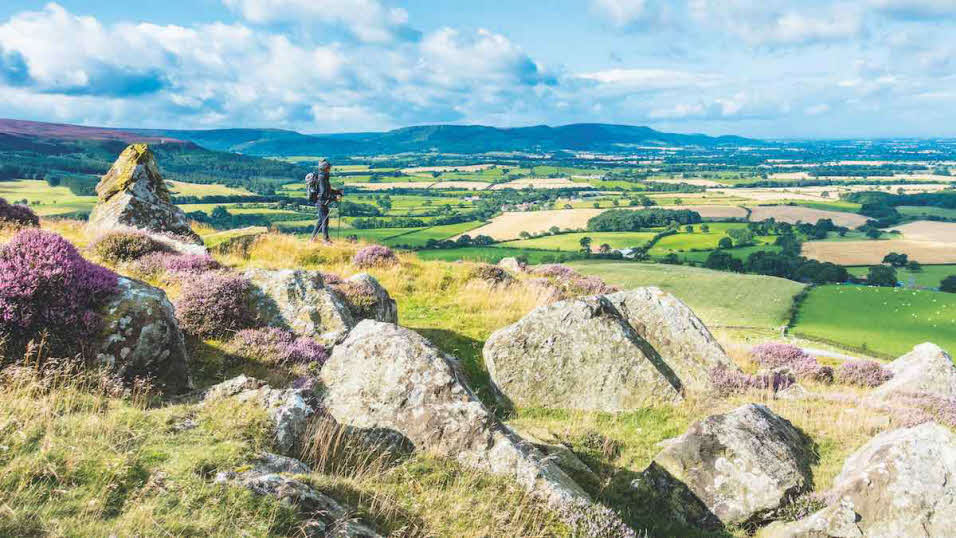 In the midst of this wilderness, North Yorkshire Moors Club site emerges like a mirage. It’s a stunning spot, sheltered by trees, with a boules pitch and crazy golf course for campers who want to stay on site, alongside the owls, woodpeckers, deer and hares that call this place home. The site has two very good dog walks, and managers Karen and Kevin Greenwood recommend a circular, three-mile ramble from the gate to Falling Foss waterfall, where a lovely tea room provides the energy to climb back up the valley to the site. The contours cancel out cake calories!

The remoteness and tranquillity of the site are at odds with the lively streets of Whitby, a striking seaside town that seemed to be thriving in a summer of staycations. The Gothic remains of Whitby Abbey – particularly spooky in the gloom of late evening – peer down on the town, but after Richmond Castle and Mount Grace Priory I’ve had enough of ruins, a decision that’s all the easier to make given the 199-step climb to get there. 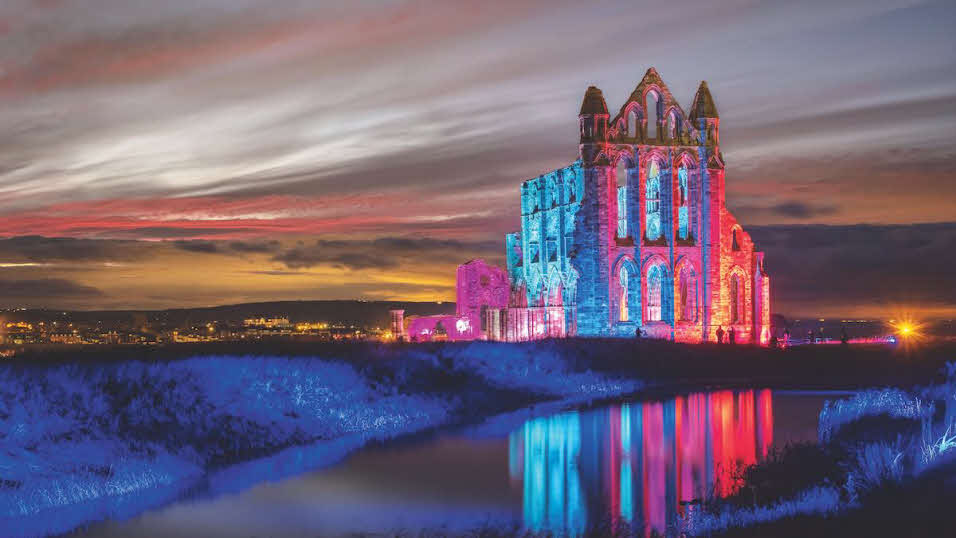 Instead, I stick to the narrow lanes that twist through town, past jet, amber and jewellery shops, before enjoying a cool drink on board HM Bark Endeavour, a full-size replica of Captain James Cook’s ship that sailed to the Pacific and Australia. It’s the perfect aperitif before a takeaway cod and chips from the legendary Magpie Café.

The coast road south is a pleasant drive through moorland to the Club’s Cayton Village site, close to Scarborough, where major refurbishment has included the installation of eye-catching facilities such as luxurious glamping pods and yurts, a football/basketball cage, and two superb washrooms. The site’s USP is its walking distance to Cayton Bay, although it’s a fair step for young children. Even on a sunny July day there’s space galore on the bay’s beach for sandcastles and games.

Scarborough ups the ante on Whitby, with an extensive coastline and abundant attractions. Peasholm Park is a surprise, a municipal park of lawns and lake with oriental-themed lanterns, bridges and even a pagoda on the island in its middle. Late into the evening families are still enjoying picnics and strolling through the park. 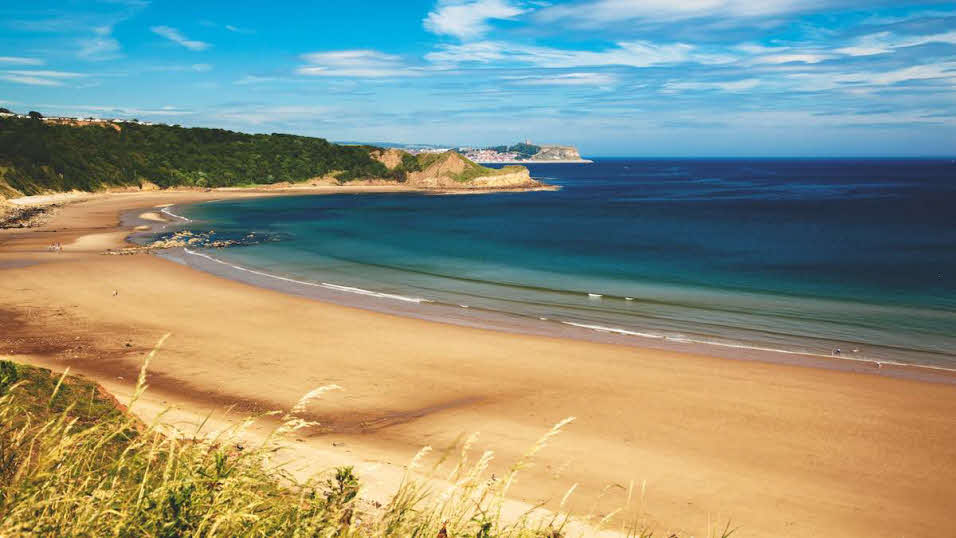 About six miles inland, Sawdon Heights CL offers the perfect counterpoint to Scarborough’s buzzing streets, for those who prefer a quieter pace of life. Set at the end of a long drive, this grass paddock boasts a shower and toilet. Walks radiate from its gate, and it’s cycling distance from world-class mountain biking at Dalby Forest, where a bike hire centre and graded trails make it easy for riders of all levels to explore the vast plantation.

Continuing southwards, the coastline from Scarborough via Filey to Bridlington attracts a fabulous array of seabirds, especially at Bempton Cliffs, where an RSPB reserve keeps a watchful eye on the half a million puffins, gannets and guillemots that nest precariously on the chalk rock face. The cliffs continue to Flamborough Head, dominated by its whitewashed lighthouse, and for those with the time there’s a hugely enjoyable coastal walk around the point.

It’s only a couple of miles farther to Bridlington Club site, nestled in a peaceful spot a short bus ride from the town. For those who prefer to cook, Assistant Site Manager Michael Cozens recommends the harbourside fishmongers for seafood fresh from the port’s trawlers and crabbing boats. 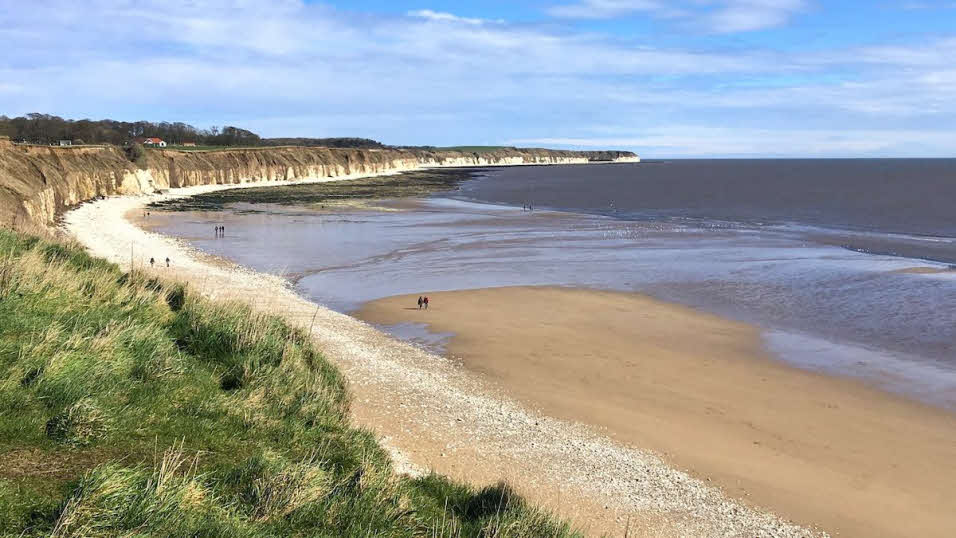 Bridlington – ‘Brid’ to its friends – has everything a resort needs, including the horizon-to-horizon North Beach and South Beach, amusements, and the Lilliputian Bondville Model Village, with its 200-plus miniature buildings. While the sea-facing resort side of Brid is its primary draw, it’s definitely worth a detour inland to the Old Town, where the characterful High Street is sufficiently unspoiled to have served as the backdrop to 2016’s Dad’s Army film.

Even closer to the site is Sewerby Hall and Gardens, whose 50 acres cover every base for holidaymakers; a single ticket secures access to the Edwardian country house, formal gardens, parkland and a zoo. A more cultured visitor might leave with their camera’s memory card filled with photos of furniture (from the Victoria and Albert Museum), or the kaleidoscope of colours in the Walled Garden, but I can’t resist the Humboldt penguins as they dive for fish at feeding time.

As they waddle and comically cock their heads, they look like extras from those Wallace and Gromit films, and as I wind up the steadies one last time I picture them saying, in a broad Yorkshire Peter Sallis accent, “Cracking tour, Gromit.”