The wonder of the West Country

From idyllic villages to quiet beaches and fascinating history, Lee Davey discovers an abundance of reasons to holiday in Somerset 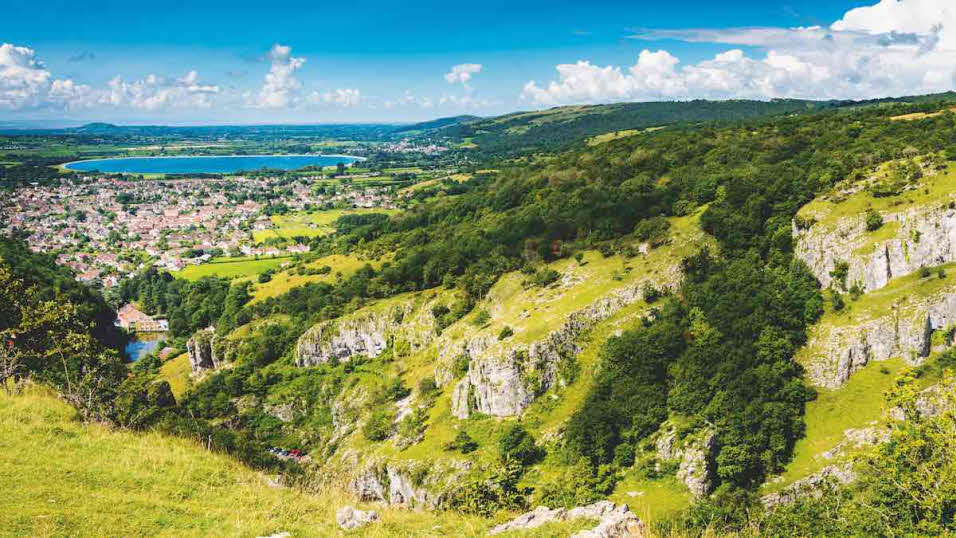 It is all too easy to overlook Somerset when touring the south-west, with arterial routes such as the M5 and A30 fast-tracking many a holidaymaker to Devon and Cornwall. However, Somerset’s geography turns it into a paradise of sorts, with the Quantocks, Mendips, Blackdown Hills and Exmoor National Park attracting folks across millennia.

Lush rolling hills offer striking views across the county and beyond, while ice age meltwater created subterranean dwellings for the earliest visitors, with ‘Cheddar Man’ settling in Gough’s Cave over 9,000 years ago! So, there’s an abundance of Areas of Outstanding Natural Beauty (AONBs), a National Park and a UNESCO World Heritage Site, which made choosing a base from which to begin our travels a very tall order indeed.

As the name suggests, our most northerly destination – the adults-only Bath Chew Valley Caravan Park – sits within the Chew Valley, although its surroundings looked incredibly different just 65 years ago. To cope with increasing demand on the water network, Chew Valley Lake was created by Bristol Water and serves as an impressive landmark to this day. With landscaped picnic spots and a tea shop that’s favoured by local cyclists, the footpaths and cycle routes here are understandably popular, as is the caravan site, which sits to the east of the lake.

An Affiliated site, Bath Chew Valley is independently run, and as such the site staff like to do things a little differently. Upon arrival, your caravan is pitched and levelled as part of the service. Newly erected information boards detailing local attractions enable you to plan your stay. With such a scenic backdrop, walks are understandably popular, and suggested routes include a lakeside ramble (with a recommended lunch stop at the midway point) as well as a circular hike at Burledge Hill. Both are practically on the doorstep, but a short car journey north can take you to the countless attractions of Bristol, or west to coastal towns, including Weston-super-Mare, home to the world-famous motorsport beach race every October.

Heading south-west, we made our way towards Cheddar. Famous for its gorge, caves and, of course, cheese, the name has evolved from an Old English word meaning ‘dark cavity’, a suitably apt geological reference. Heading for Cheddar Caravan and Motorhome Club site, our route (taken carefully) passed through the world-famous gorge, where impossibly steep sides guide both car and caravan towards the town (note: if approaching on the M5, exit at junction 22 and follow the directions in your Sites Directory and Handbook).

It was fascinating to ponder that periglacial meltwater had created the picturesque passage along which we were driving. Water is a seemingly unstoppable force, and after the gorge had been cut, the torrents carved the caves and tunnels for which this area is famous. While it hasn’t been possible to explore the attractions at the gorge of late, this site of early civilisation has remained eerily unchanged for millennia.

As an aside, DNA analysis indicates that Cheddar Man was in fact lactose- intolerant, which seems ironic given that Cheddar became home to the famous cheese years later! 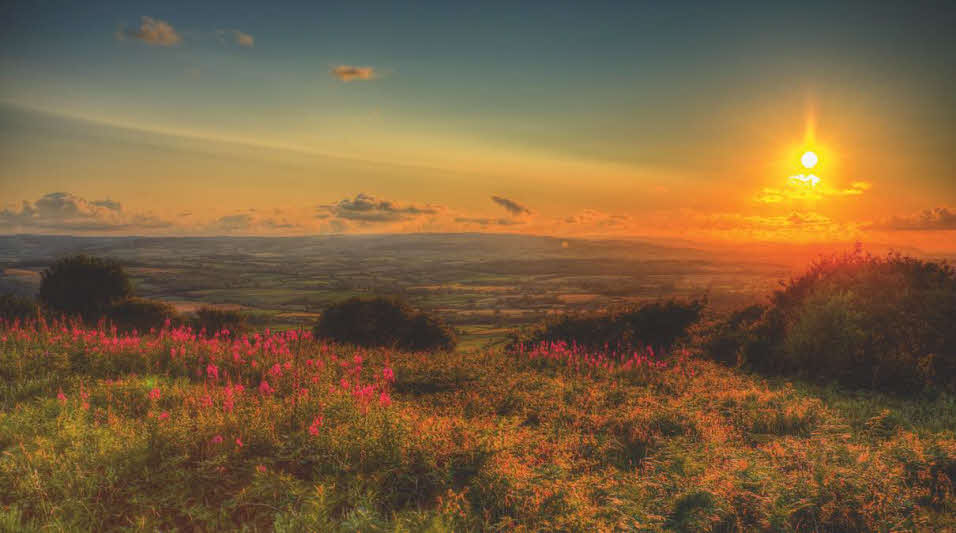 The site sits on the southern tip of the town and is understandably popular with members wishing to explore the picture-postcard streets, as well as attractions a little further afield. Some members I spoke to had discovered the Strawberry Line – a 22-mile traffic-free route that stretches from Clevedon in the west to Shepton Mallet (close to the site of the Glastonbury Festival) in the east, and boasts highlights such as Thatcher’s Cider Farm. Having hired cycles from Cheddar Bikes (cheddarbikes.co.uk), they had the perfect afternoon planned.

Handy for many of the same attractions is Malthouse Farm CL, a 25-minute drive away towards Highbridge. From this five-unit site, the coastline north of Burnham-on-Sea is easy to explore, with Berrow and Brean proving ever-popular during the holiday season.

The tidal range and soft mud flats in this part of the world at low water mean caution is needed – so take heed of local information. Berrow South is a dog-friendly beach popular with adrenaline-seekers, as well as horse riding and fishing enthusiasts. It’s worth noting that sunsets can be stunning, and best accompanied by a picnic. However, should you wish to head away from the coast, the local AONBs – the Mendip Hills to the east, Quantock Hills to the south-west – are close enough for a very quick change of scene. 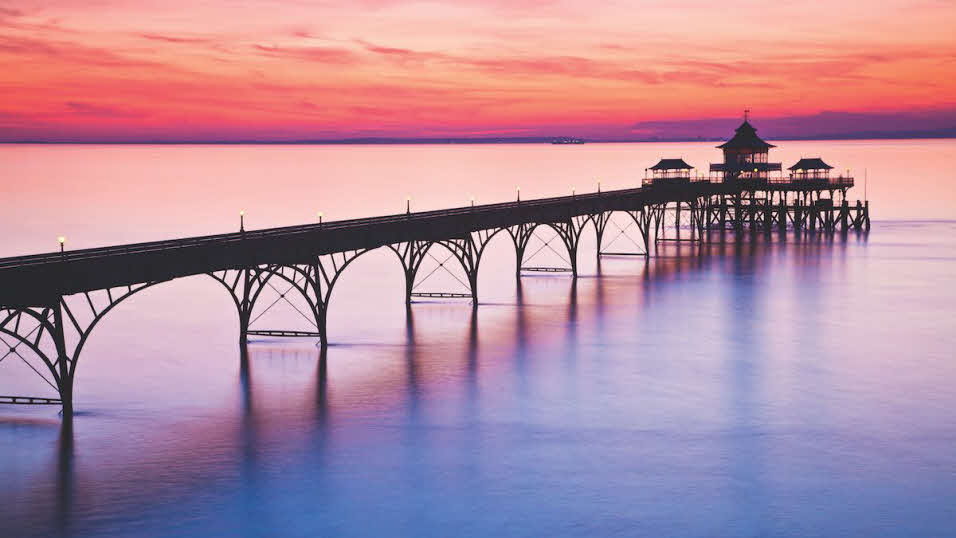 One of the places that surprised me most during our tour of Somerset was Minehead. The seafront resembles that of many other seaside towns and you’ll find a good range of pubs, shops, restaurants and quaint cottages. The main beach was surprisingly quiet for a sunny Saturday and a walk towards the harbour brought us to many picturesque spots, as well as a handily placed hostelry. Tourism organisations have been hard at work creating a series of walks around the area, one of which aims to occupy the family with an app-led route based around history, myths, and legends.

It was great to see the effects of a relatively recent regeneration programme on the esplanade, especially given the plight of many seaside areas over the years. The beach, known as The Strand, is sandy, with dotted patches of shingle and rocky pools, although the central section was off-limits to our dog, Max. Beach-loving canines are, however, welcome on the area in front of the golf course. With my wife Helen and Max sat ‘top side’, I ventured to the water’s edge with my son, Charlie, who was the only person on the entire beach to brave the cold water for a swim.

Just a 20-minute walk from the seafront is Minehead Club site, an attractive and well-tended site with 49 hardstanding touring pitches. A former quarry, the site is spread out over several different levels. It’s, spacious and quiet and boasts a variety of plants, trees, and shrubs. Spotless facilities, very friendly site staff and a great location mean we’ll definitely visit again. It’s also a great spot for motorhomers, who may wish to leave their vehicle on-site, thanks to public transport services nearby.

After heading south across Exmoor National Park we arrived at Dulverton, yet another picture-postcard town. Exmoor House Club site is situated on a road between the Bridge Inn and the River Barle; we almost missed it, and it’s worth using the pub as a landmark if this is your first booking at the site.

Exmoor House’s location grants access to the northern coastline of Somerset as well as Devon to the south, with ‘A’ roads taking the strain, meaning you can choose faster or slower routes depending on the weather. As it was a relatively short stay, we chose to mooch around the town, enjoying the riverside walk as we returned to the caravan. 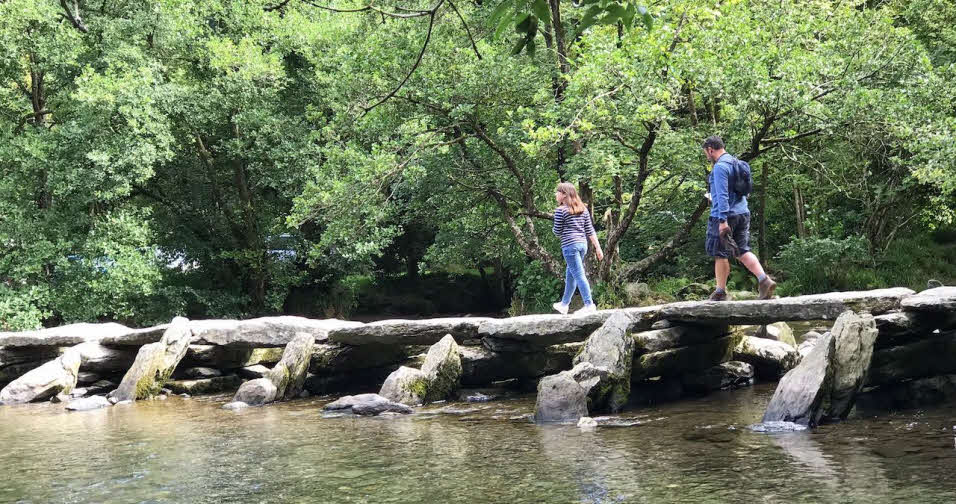 The site has 66 hardstanding pitches and offers splendid views of the valley, with the Barle hugging the outer edge, burbling past our ’van for the duration of our stay. It is well situated if you enjoy walking (with or without a dog) with woodland and the National Park walks nearby, and there is something incredibly special about falling asleep to the sound of a river. Dulverton is close to unique places of interest such as Tarr Steps, an ancient clapper bridge spanning the Barle. Should you wish to discover other Somerset towns and villages, Watchet and Porlock are within easy reach and worthy of further exploration.

To the east, Southfield is an adults-only Certificated Location with so many local attractions nearby as to be almost a resort in its own right.

History and photography buffs will love Burrow Mump, home to a ruined hilltop church that now serves as a memorial to those who lost their lives during the Second World War. Nearby Coates English Willow is a popular draw with Southfield visitors interested in basket weaving courses – and many rebook both site and course to further hone their skills. For refreshment after walking and weaving, Parson’s Choice Cider shares the site’s A361 approach, and The King Alfred Inn sits at the foot of the aforementioned Burrow Mump.

The final destination on our tour of Somerset is Ilminster, which many of us will have seen signposted when heading towards Dartmoor and beyond. It is close to both the A303 and the Blackdown Hills AONB, an area that has to be explored fully to be properly appreciated. Various cycle routes are on offer and blackdownhillsaonb.org.uk provides routes that can be viewed ‘on the hoof’ via smartphone. Should you wish to explore by foot rather than bicycle, the website also features walking routes that suit all abilities, from an easy half-mile to those nearing marathon distance.

Ilminster Club site is also popular with National Trust members wishing to tick off properties within the guidebook; this part of Somerset is packed with Trust locations. Charlie and I favoured a brief glimpse of Dunkeswell Airfield, which was created in 1943 as RAF Dunkeswell. Today it is a civilian airfield and home to a heritage centre but, sadly, the museum was closed when we visited, with few clues as to when it would reopen.

With so many of us taking our ‘big holiday’ in the UK this year, it is without doubt a great time to investigate locations that we might otherwise have ignored. Even for me, as a resident of neighbouring Dorset, my Somerset trip was something of an adventure, underlining just how many undiscovered gems lie unseen, and often close to home!