There are some bike rides that are all about the journey and others where the destination is the main selling point. Few deliver on both facets as spectacularly as this one.

Setting off from Berwick Seaview Club site, the route hugs the beautiful Northumberland coastline, sweeping past sandy beaches, sheltered coves and dunes flanked with wild grass and dazzling yellow gorse. The turning point for this out-and-back route is Lindisfarne, also known as Holy Island, an otherworldy place that sits almost a mile out to sea.

Reaching the island involves crossing a tidal causeway that is enveloped by the North Sea twice a day (see holyislandcrossingtimes.northumberland.gov.uk for details). Despite copious warning signs to respect the tide times, the RNLI has to regularly rescue stranded motorists caught out by the speed of the incoming waves.

Cycling across these vast sand and mud flats, knowing that in a few hours they will be fully submerged, is an extraordinary experience. Even with hours to spare before the tide returns, there is a certain relief at reaching ‘terra firma’ on the far side of the causeway.

Lindisfarne was the launchpad of Christianity in Britain after St Aidan founded a monastery here in 635AD, and you don’t need to be a pedalling pilgrim to appreciate the sense of calm on the island. Outside sunny weekends and high season it feels unlike almost anywhere else, a blissful peace extending over the windswept island.

Key attractions include the photogenic 12th-century ruins of Lindisfarne Priory and its neighbouring museum (run by English Heritage); and the rugged and surprisingly small Lindisfarne Castle (run by the National Trust). The castle is a beguiling mix of 16th century fort and early 20th-century holiday home, created for Edward Hudson, the founder of Country Life magazine. He commissioned the famous architect Edwin Lutyens (who designed the Cenotaph in London and Thiepval Memorial on the Somme to commemorate the fallen of the Great War) to turn the castle into a country retreat Due to the fact there is virtually no light pollution on the island it is also one of the best places to see the Northern Lights - and undoubtedly the most stunning setting if you are lucky enough to catch them.

It would be easy to spend the whole day soaking up the unique charm of the island but be wary of the tide times if you don't want to be stranded! The ride follows Route 1 of the National Cycle Network and is a mix of grassy bridleway, which can be rutted and muddy, and quiet, single-track road with the causeway to Lindisfarne the only place where cyclists are likely to encounter any traffic. 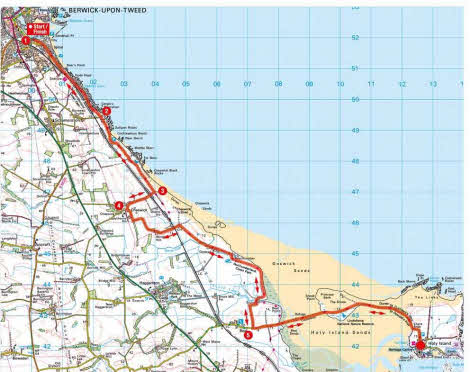 1 From Berwick Seaview Club site turn right downhill and then take the third road on the right, Main Street, signposted to Spittal Promenade. Continue straight ahead for 1km until the road is replaced by a grassy track, with the railway line immediately on the right. Stay on this track for 2km, with lovely sea views to the left – watch out for ruts and potholes – until a T-junction with a road, and The Lodge Cocklawburn on the left.

2 3.3km – Turn left at the junction along the quiet road, following the Cycle Route 1 sign, with the sea still on the left. The asphalt gives way to a track. Continue for 3km until the track meets a road.

3 6.5km – Turn right at the road, heading inland, to cross a railway bridge and continue for just over 1km, passing through a pretty hamlet, to reach a T-junction.

4 7.6km – Turn left at the junction, signposted to Goswick and Windmill Hill. Follow the road through Goswick Golf Course, and when the road gives way follow the bridleway through farm gates and across moorland, eventually crossing Beal Sluice, then following the gravel track to the right until a T-junction.

5 15km – Turn left at the junction, signposted to Lindisfarne. Check the tide time boards before crossing the causeway, then pedal across. Lindisfarne Priory is well signposted in the heart of the village, while the castle is on the far east coast. After visiting the island, retrace the route to Berwick Seaview.