Jonathan Manning gets a close-up view of thousands of seal pups on a visit to one of the most successful breeding grounds in the UK at Donna Nook in Lincolnshire. 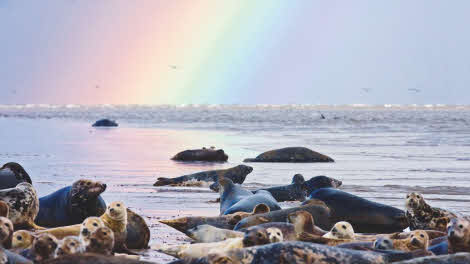 More than 2,000 adult seals return to Donna Nook during breeding season each year

Who would have thought that one  of the UK’s most successful breeding grounds for grey seals would be located in the vicinity of an RAF bombing range? Despite explosives periodically raining down from the sky in the area, Donna Nook in Lincolnshire boasts a well-above-average seal pup survival rate of about 90%.

Grey seals only started breeding on the Lincolnshire coast in the 1970s. With no natural predators, seal success at Donna Nook is most likely due to the absence of human disturbance, particularly by walkers and dogs. The most common cause of pup mortality is abandonment by the mother; mortality rates had been rising here until the Wildlife Trust introduced a fenced-off viewing area.

In 2019 2,187 seal pups were born at Donna Nook between late October and early December. During ‘normal’ years, the spectacle can draw tens of thousands of visitors but due to the pandemic Donna Nook was closed on 2 December for the remainder of the pupping season. Not only do the seals come incredibly close to the viewing area but they are hugely engaging – their large, Labrador-like eyes nudging their cute quota off the scale.

The red warning flag of a firing range snaps in a stiff breeze as I clamber up a flight of wooden steps to the top of a sand dune (The Ministry of Defence still maintains part of the area as a target range and under no circumstances should anyone enter the bombing area when red flags are flying). Salt marsh stretches to the northern horizon, while to the east mudflats blur the line between land and sea. Compared to the endless miles of soft, sandy beach at nearby Skegness and Mablethorpe, Donna Nook looks muddy and uninviting so it doesn’t take long for the newborn, white seal pups to resemble the ‘before’ characters in a washing powder commercial!

At the foot of the dune a path leads along the edge of the marsh, separated from the tidal creeks by a double fence. The seals may look cuddly, but numerous signs warn that they are large predators capable of a powerful bite. They can also move surprisingly quickly, even if they appear clumsy and ungainly on land. 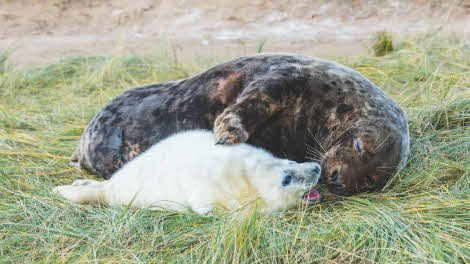 Their fat reserves have to support the mothers through the two- to three-week weaning period, during which they don’t eat and lose about a quarter of their body weight. The colossal, 300kg bulls that protect and mate with a harem of females may go five or six weeks without eating. For the pups, however, these early days are a crash course in weight gain. Tipping the scales at a wrinkly 14kg at birth, they immediately start to pack on 2kg per day, suckling the richest of milks – grey seal milk is 52% fat and 11% protein (compared to 3% fat and 3% protein in cow’s milk).

About 30m along the path a pup gives out a loud, plaintive call for its mother. Born the night before, its fur is still yellow with amniotic fluid, and a warden points out the afterbirth on the marsh. Its mother hears the cry but stays silent, choosing instead to cool down in a dirty puddle before tending to her offspring. The mix of mud and dark speckled grey of the adult seal fur acts as camouflage, although there’s no mistaking their outsized profiles as hundreds bask across the marsh. The higher the sun rises, the greater their activity levels, with the occasional flare-up and chase between animals that have encroached on each other’s patches.

Nevertheless, it is quieter and less smelly than I had expected from such a giant crèche. A warden explains that volume levels rise once the mothers have mated and returned to the sea, leaving their pups to fend for themselves on land. 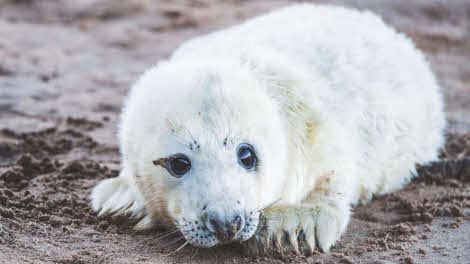 By this stage the youngsters are about 18 days old; they congregate like boisterous teenagers for a further fortnight, while their white coats moult to be replaced by grey, adult fur. At five-to-six weeks of age, hunger drives the pups into the waves for their first of a lifetime of fish suppers.

When I visited, a ticketing system had reduced the number of daily visitors to 600, at staggered times, to enable social distancing. The Wildlife Trust had also introduced a one-way system, so when I spot a seal approaching the viewing area fence I’m forced to walk all the way back round. The loop is worth it as I’m in place to see a new pup raise its head and call out pathetically, for all the world sounding as if it’s hollering “Muuummmm!”

Blakeney, Norfolk: Take a boat trip to see the colonies of grey and common seals at Blakeney Point. The seals are often basking on the sand and will also pop up their heads next to the boat.

Isle of May, Firth of Forth:  Keep your eyes peeled for gannets, porpoises, dolphins and the occasional whale, as well as the grey seals that call this island home. About 200 seals live here all year round, and their numbers swell to 4,000 during autumn’s birth and breeding season.