Fossil hunting on the Jurassic Coast

If you know where to look and what to look for, there are archaeological treasures to discover after every high tide along the Jurassic Coast. Jonathan Manning joins a guided walk on Lyme Regis beach to learn more about the fascinating history that is literally right under our feet. 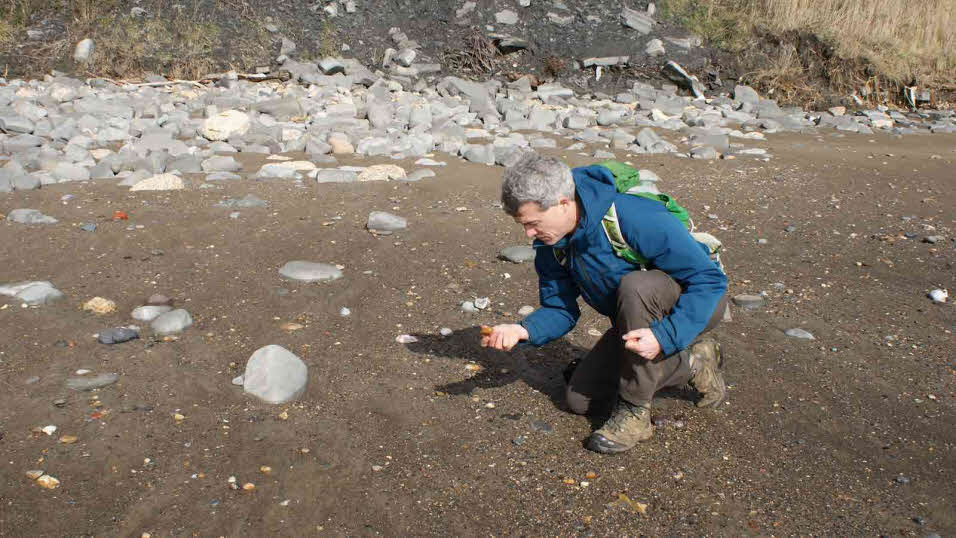 “The best thing about fossil hunting is that you never know what you’re going to find,” says Paddy Howe, walk leader and geologist at Lyme Regis Museum. He’s been searching for fossils along Dorset’s coastline for almost half a century and his enthusiasm remains undimmed.

If you know where to look and what to look for, there are archaeological treasures to discover after every high tide along the Jurassic Coast. Some are carried in by the waves but the majority are washed down from the cliffs. Bad weather, it turns out, might rock a caravan at Wood Farm AS, but is also a harbinger of good fossil hunting.

As we wait for high tide to subside, Paddy takes out a selection of fossils from his rucksack. With the excitement of a schoolboy showing off a grasshopper in a matchbox, he passes round the vertebra of an ichthyosaur, a type of reptile once common in these parts; a selection of ammonites, spiralled like rams’ horns; and an echinoid, a stone with a fantastically-detailed image of a sea urchin etched into its surface.

“Anyone know what this is?” asks Paddy, holding up a shiny coprolite pebble. It’s a fossilised poo, complete with Jurassic fish scales. Contrary to popular opinion, here’s proof that you can ‘polish a turd’! 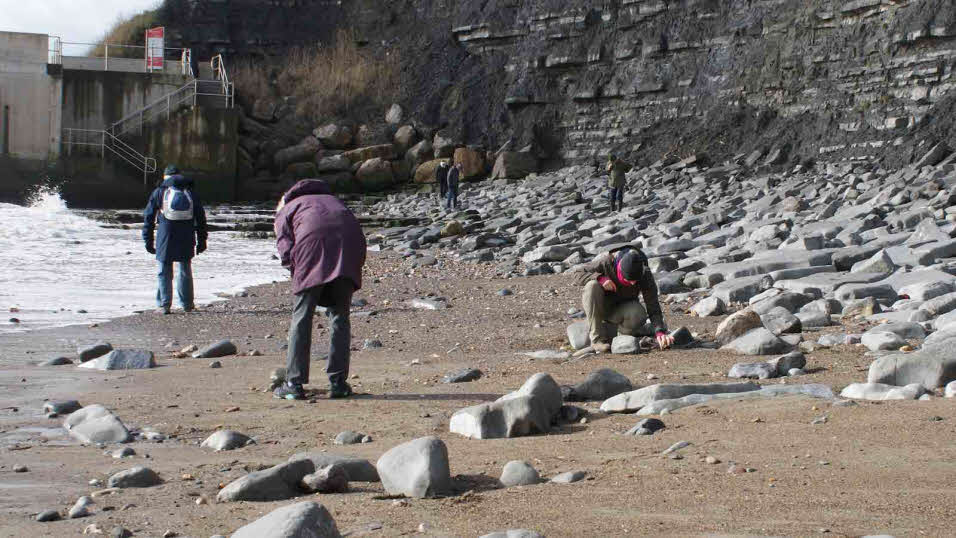 People flock to the Jurassic Coast from all over the world

Scampering above the waves we begin our walk. Our group consists of a retired couple from Cambridge, myself, a young Austrian couple and an elderly husband and wife from Florida. The Jurassic Coast is globally renowned for its rich fossil history.  “This is the only World Heritage Site where you are actively encouraged to take away artefacts,” says Paddy. “Don’t try that at Stonehenge!”

The ethics of fossil hunting are straightforward – anything found on the beach is fair game to keep but you’re not allowed to hack away at the cliff. If you find a never-before-seen fossil you’re encouraged to have it catalogued and classified by the nearby Charmouth Heritage Coast Centre. There’s a chance the experts will name it after you.

Regardless of my caravan’s MTPLM, I’m secretly hoping to find a T-Rex jaw, pterodactyl wing or diplodocus spine, my dinosaur knowledge honed by Spielberg rather than text books. But this is not the place for such glamorous discoveries. Between 200 and 208 million years ago – “give or take a week,” says Paddy – this area was a warm, shallow ocean, so its fossils are of reptiles and sea creatures. 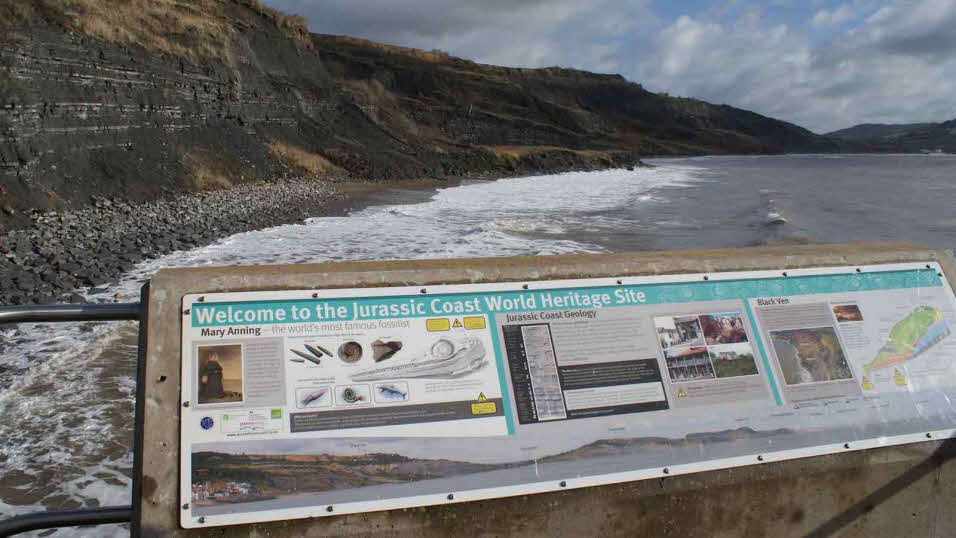 With scientist at a crime scene. this in mind, my search moves from macro to micro as I scan the beach with the focus of a forensic My initial discoveries include a translucent pebble that turns out to be a fragment of a beer bottle rather than amber, and a piece of flint that I had been hoping would be a sea snail. Paddy lets me down gently and starts to point out clues to more promising places to search.

Sure enough a tiny, shiny, perfectly-spiralled fossil glints out of the sand. It covers barely a third of my thumb nail and is made from iron pyrite, otherwise known as fool’s gold, yet it feels extraordinarily precious – 195 million years ago it was bobbing around in these waters. The dates are bewildering, sobering evidence that our own existence accounts for the briefest flicker on Earth’s timeline. 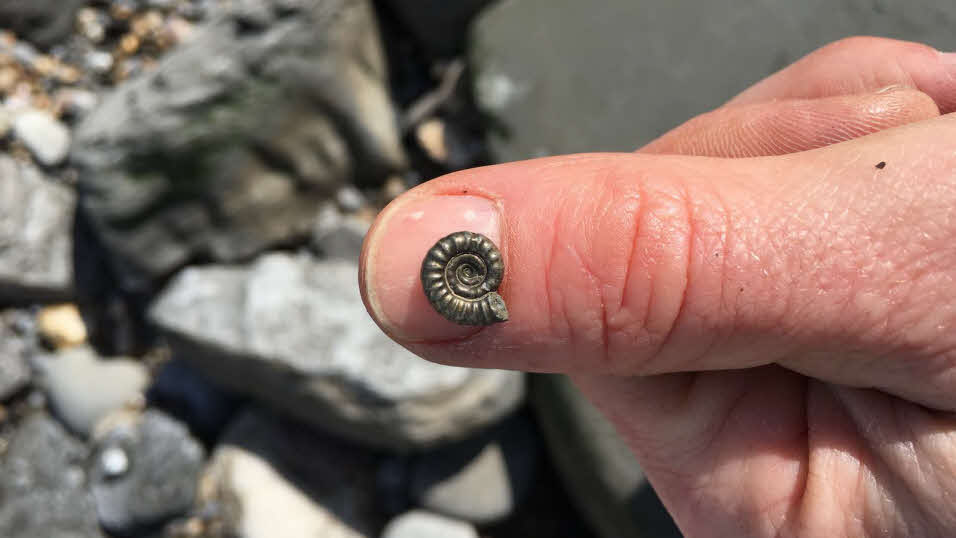 This may be billed as a fossil walk but there’s not much walking involved. As we approach the far end of this out-and-back walk, less than a mile from where we started, Paddy gathers a series of limestone rocks and starts to crack them with a heavy geological hammer. Some turn out to be solid limestone but others open to reveal the beautiful calcite spirals of ammonites. Each stone feels like a Jurassic scratchcard; some are winners containing fossils, others are duds.

On the walk back to Lyme Regis Museum, instead of gazing to where sky meets sea, I concentrate on the sand and pebbles at my toes, stooping to investigate the tell-tale signs of a possible fossil and trying to get my head around the fact that creatures lived here nearly 200 million years ago. Fossil walking is mind-blowing and addictive.

Alternative venues for fossil walks include: 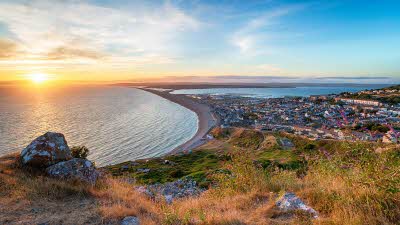 The ‘Jurassic Coast’ World Heritage Site which stretches from East Devon to Dorset’s Studland Bay. This rugged coastline is a hot spot for fossil hunters and holiday-goers.