Back in my school days, an over-eager geography teacher thought he could sprinkle magic on his subject by taking his class orienteering. In his eyes, the combination of cross-country running and map reading was pure alchemy, bringing the countryside to life in a heady mix of adrenaline and skill. To a group of reluctant 12-year-olds, it felt like mixing cabbage with brussels sprouts to make vegetables more appetising.

Fast-forward almost three decades and I’ll happily admit that the ability to map read has been the cornerstone of some very enjoyable times. And these days I eat my greens, too! Orienteering has also matured. Virtual courses, downloaded to your smartphone or GPS device, are now common, and handy if you have screenagers in tow!

As a competitive sport, orienteering is a race to tick off all checkpoints (or controls) along a course in the correct order as quickly as possible, with orienteers free to plot their own routes. Using a compass and a map, the challenge is to identify the optimum route from one checkpoint to the next, navigating river and stream crossings, walls and fences, scrubland or dense forest. This adds a mental and technical challenge to the physical fitness required to run a course.

At organised events, the start point will typically be marked on the map with a red triangle, while numbered circles indicate the checkpoints and the order in which they must be found. There is a ‘punch’ (these days it’s more likely to be a timing device or ‘dibber’) at each control on which to record your visit, and this digital information is downloaded by race officials to check you have visited all the checkpoints in the right order. The competitor with the shortest time wins.

But this is jumping the gun. For beginners, there are permanent marked courses to follow in your own time, which brings me to Ferry Meadows on the edge of Peterborough, a country park with one of the Club’s busiest sites at its heart. I know Ferry Meadows well – I used to commute through the park on my way to and from work – but I had no idea there were orienteering courses there. And therein lies one of the many appeals of orienteering: a sense of being in on a secret activity while ‘Muggles’ walk on by.

There are three courses at Ferry Meadows ranging from 2.4km to 8km, and printed maps at a scale of 1:10,000 are available at the park’s visitor centre or online. I opt for the longest course and persuade my 16-year-old daughter, Tilly, to come along for the walk/jog. 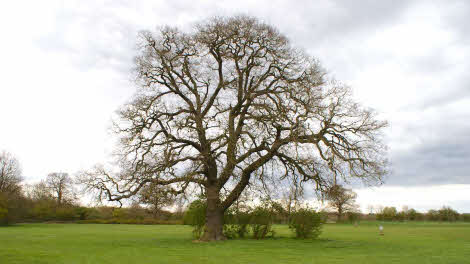 We’re not entirely sure what we’re looking for as we seek the first checkpoint; the circle marked ‘1’ on the map seems to cover quite a large area. The guidance provides the clue ‘vegetation boundary north east side’, which doesn’t help much, until we spot a short wooden post. It’s only about two feet tall and on one side has a red and white plaque bearing the letter ‘Q’. It’s our first control and we scribble down the letter.

I’m already thinking the letters will spell out a word or name, and so I’m focused on spotting a plaque featuring a ‘U’, until Tilly sees a post tucked into the roots of a giant oak tree. On the far side of the post is the letter ‘S’: not only will there be no puzzle to solve or word to spell, but it’s also clear that some plaques will be tricky to find, the weathered wood of the posts camouflaged perfectly against the background.

There are more obvious, freestanding posts, but it becomes a real challenge when they have been overgrown by thickets of bush and scrub. One is so deeply buried that brambles scratch my face as I scrape through to view its plaque. Two other controls elude us completely, despite thorough searches of the area indicated on the map.

In total, this long course comprises 21 checkpoints, ingeniously positioned to guide us around the country park and into corners we would never have discovered on a regular stroll. An arched willow avenue and the long, raised walkway above the River Nene that conveys us over a bluebell wood are particular highlights.

Moreover, searching for the controls among the borders, scrub and tree roots sharpens our eyes to the wider events of spring. Mallard nests, frogspawn and wild garlic all come centre stage, rather than merging into a blur of bush and reed bed.
It’s interesting, too, how much time the orienteering adds to the walk – normally five miles would take us a couple of hours, but it’s been nearly three and a half when we locate the final control. The activity also animates our conversation, each checkpoint prompting a discussion of the best route to the next and what we should be looking out for as we get close.

Orienteering turns out to be an engrossing challenge, a different approach to walking, and a great way to cast new light on familiar trails.

There are four courses to try in Ennerdale, one of the wildest corners of the Lake District, ranging from 1.6km to 3.1km in length and offering a variety of terrain, from flat, easy paths to rugged boulderfields.

Test your skills against a course adapted from a 2015 World Championship set-up. Inverness Orienteering Club suggests a target time of 25 minutes to visit the 10 controls on the 2.9km course.

Explore the beautiful sand and grass-covered dunes at this National Trust location.